Elephant on the banks of the Kazinga Channel

One of the absolute highlights of any trip to Queen Elizabeth National Park is a boat trip on the Kazinga Channel.  On a sunny afternoon there’s literally no better way to relax, enjoy the scenery and feast your eyes on more wildlife than you can shake a stick at, all from the comfort of a cruising riverboat.

But since you’re presumably reading this on a computer or phone screen somewhere else, why not come along with me for a virtual journey.

Why You Should Visit The Kazinga Channel

The Kazinga Channel is essentially a short river that runs between Lake George and Lake Edward in Queen Elizabeth National Park, in Western Uganda. The channel is about 20 miles long and pretty shallow: only 8 metres deep at the deepest point.  As a result, it attracts a huge array of wildlife which comes down to the water to drink and bathe. 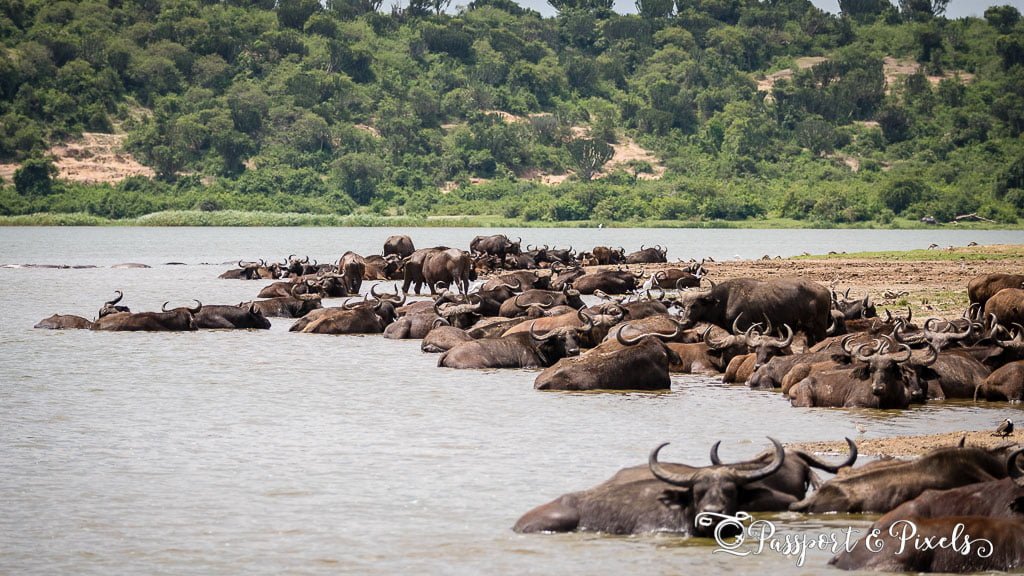 Buffalo wallowing in the Kazinga Channel

Take the 2-hour cruise along the Kazinga Channel, and you’ll be guaranteed some of the best wildlife viewing you’re likely to experience anywhere in Uganda.

I visited Queen Elizabeth National Park as part of a two-week trip round Uganda with my friend and fellow travel blogger Linn from www.travellinn.net.  We spent two days in the park, and if you’d like to find out more about what we got up to, check out Close Encounters and Craters & Creatures.

Before the boat ride, we went for lunch at a nearby cafe called Tembo Canteen.  This is a reasonably-priced and popular cafe perched high on the hillside directly overlooking the Kazinga Channel, with incredible views out over the landscape.  Even from high up, we could already see the animals grazing on the banks of the river below.

Wildlife on the banks of the Kazinga Channel

Even from so far away we could spot elephants, buffaloes and hippos.  I began to get very excited about getting down there and seeing them up close.  It was rainy season, but despite our worst fears the sun was shining, so this was going to be good.

But if we wanted to see wildlife, we didn’t need to look nearly so far.  There was some pretty impressive (and scary) bird life right there in the grounds of the restaurant! 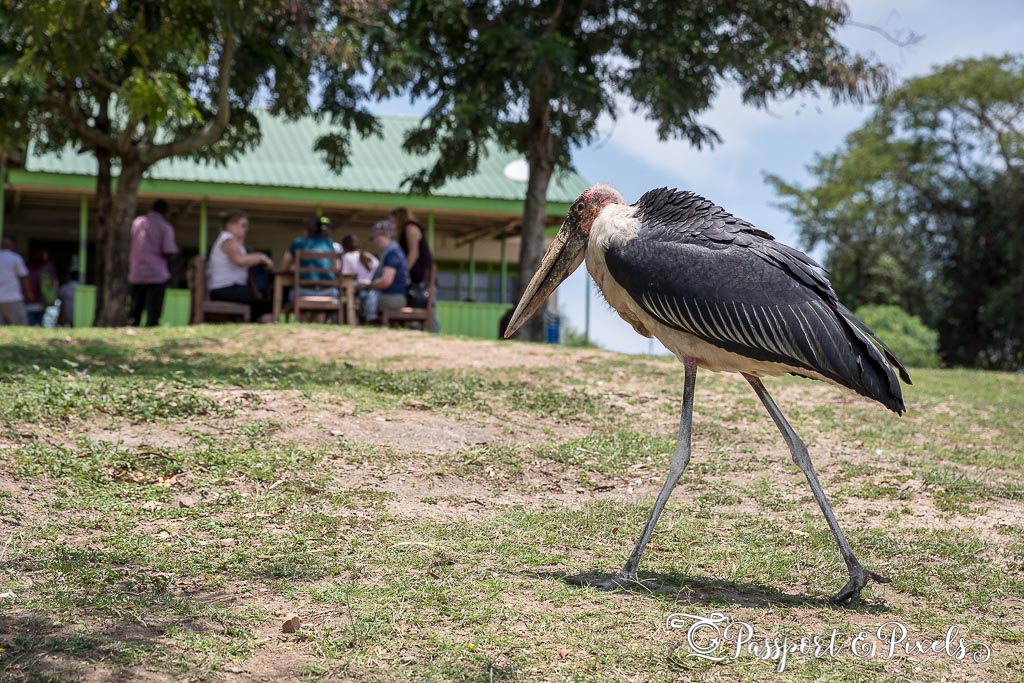 This guy is a Marabou Stork.  They’re everywhere in Uganda, like giant, terrifying pigeons, over 1 m tall, lurking round bins and rubbish dumps, eyeing up your food at outdoor cafes, ready to pounce.

I think they’re spectacularly horrible, with their glassy eyes, wispy grey hair, wrinkly pink jowls and leering glare, they remind me of a malevolent old man.  It might not surprise you to learn that they’re known as the ‘undertaker bird’ because of their grey ‘coat’, skinny legs, hunched posture and creepy stare. 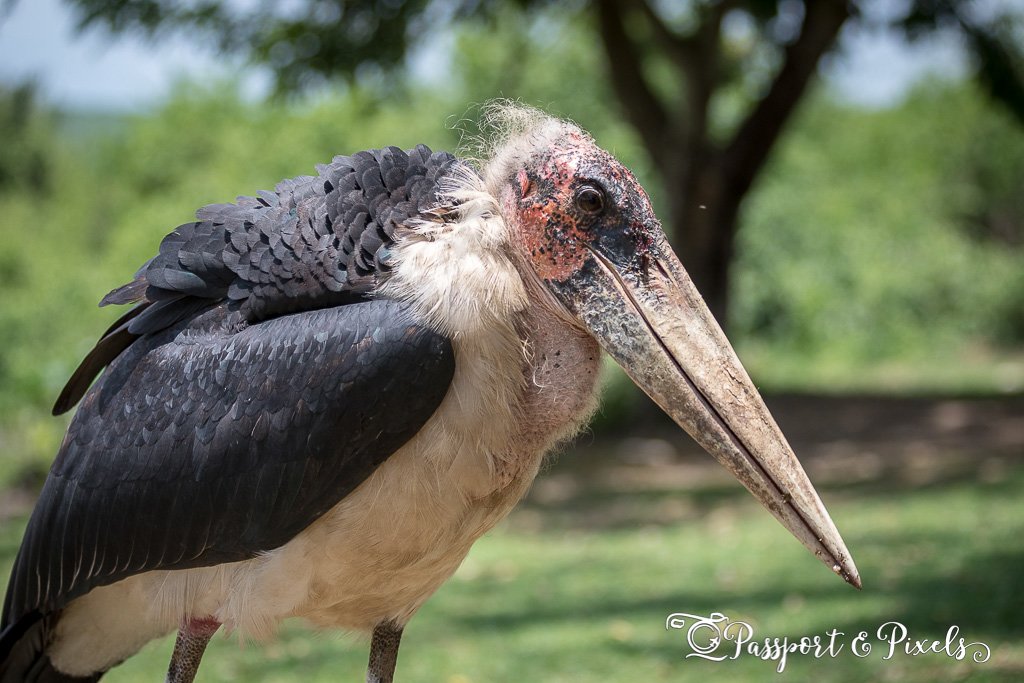 But these are also the many reasons they’re fascinating to photograph. Look at the texture of that skin – they’re like something from a prehistoric age.  You can see why scientists think that birds are descended from dinosaurs!

Although they are fascinating, they’re actually pretty scary.  Totally fearless, they’ll think nothing of coming up while you’re eating and trying to steal food from your plate. Look at this guy, eyeing up Linn’s chips.  And I bet that huge beak can do some damage if you get on the wrong side of it!

If you do have lunch at Tembo Cafe, as well as being aware of the storks, bear in mind that it can get very busy, so if you’re rushing to make your boat departure make sure you allow plenty of time as the service was slooooo-oooow!

By the time our food finally arrived we only had about ten minutes to wolf it down before we had to leave, rushing to make the boat before it left without us!  But we got there with moments to spare, and were soon happily settled on board the Hippo.

Our boat for the cruise

Because we were late arriving, there were no seats left on the top deck, but that didn’t matter.  In a way I preferred the lower deck, as there was space for me to move around with my camera and tripod, and we were slightly closer to the animals, and more on their level. I think it makes for better photography.

The boat trip takes two hours up and down the Kazinga Channel, and costs $30 per person.  This was our captain, Chris, who steered the vessel and gave us commentary on what we were seeing.

Mammals on the Kazinga Channel

And what a fantastic view we had!

The channel is home to one of the world’s largest concentrations of hippos – around 2000 of them!  These guys might look peaceful and friendly, chilling out in the water, but the hippo is actually the world’s deadliest large land mammal.

They’re angry and aggressive creatures, with very sharp teeth.  And you wouldn’t want to have one sit on you: at up to 2,750kg they can easily crush a person to death.

We also saw hundreds of buffalo, wallowing and dozing on the shores in the sunshine.

This many buffalo all together is an impressive spectacle – and with all the grunting and lowing and splashing around, they make an impressive amount of noise too!

The way to tell males and females apart is that the males have bigger horns which grow from the top the head, a bit like a centre parting.  On the female the horns are smaller and grow out of the sides of the head.  So in the photo above, the one on the left is female and the other two are males. There are lions in the park too, that are sometimes spotted by the Kazinga Channel. We didn’t see any, but with this many animals coming down to the water every day, I imagine this place is a bit of an all-you-can-eat-buffet for a hungry lion!

A little further along the shore, we came across this beautiful elephant, drinking by herself.

I was in my element, eye clamped to the viewfinder, heart pounding with excitement, snapping away, completely in my happy place.

Read More: How To Take Great Photos Of Wildlife

For the technically-minded amongst you, I was using my beloved Canon 5D Mark IV with a 70-200 f/2.8 L II lens, and a 2x extender, giving me a maximum zoom of 400 mm and a maximum aperture of f/4, which was plenty enough to get close-ups like this. 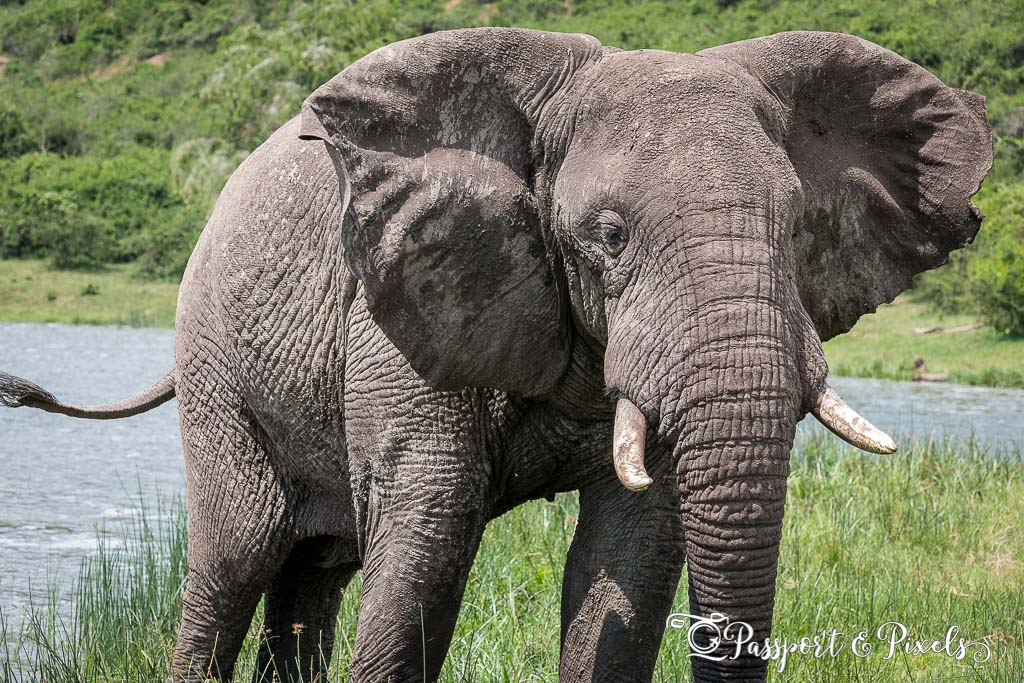 As we continued we saw more elephants, entire families with adults and babies, grazing by the water’s edge.

Not too far from where we saw the elephants, we passed a fishing village.  There are 11 fishing villages in Queen Elizabeth Park, and it was interesting to see a different side of the park, with the boats pulled up on the banks, and the people working away.

I can’t imagine what kind of a life it must be, living in such a beautiful place like this, but always aware that at any moment you might get on the wrong side of a stressed-out elephant, or a pissed-off hippo, or a hungry lion.

The villagers do sometimes cross paths with the wildlife.  Around 500 people a year are killed by hippos in Africa, most of them when the hippo is out of the water.  It’s so dangerous that the fishermen have to do all their fishing at night to avoid the hippos (which graze on land at night and spend their days in the water).

Lions sometimes steal livestock, which causes conflict between man and beast.  Just after our visit, 11 lions were tragically poisoned by villagers in revenge for the killing of some cows.  You can read more about that in this post.

Bird Life on the Kazinga Channel

As you might expect, the Kazinga Channel is also teeming with bird life – you can easily spot 60 species in the 2-hour trip.  If you’re a bit of a twitcher, you’re gonna love it!

There are black-headed weaver birds, the males busy building intricate nests in the hope of impressing a female (human men, take note!)… … and plenty of pied kingfishers.  This is a pair: the male has the black stripe across the middle of his chest, and the female doesn’t.

There were also gulls, and majestic pink-backed pelicans…

… and an army of great cormorants.  Check out the way all these guys are facing in the same direction with their beaks open.   They do this after feeding, facing the sun to warm themselves up and aid digestion.

Key Facts about the Kazinga Channel Have you been to Queen Elizabeth National Park? Or are you planning to go? Where else would you recommend for a wildlife-spotting boat trip? I’d love to hear your comments, so please post them below!

Video: My Third Month In Uganda 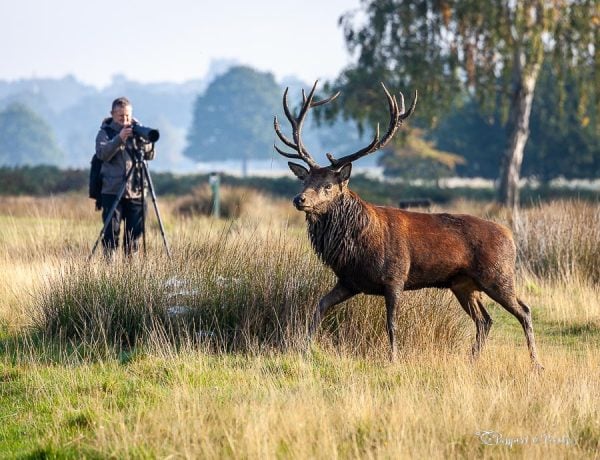 I’m in exactly this boat. I’ve lost a full years earnings due to the virus and lockdown and all I’ve seen of government assistance is £321. I have to find a way to survive until next summer, when the work picks up again. The tories are letting me go under. https://twitter.com/passportandpix/status/1266085879342419968