Along with Vikings and fermented shark, one of the most well-recognised icons of Iceland is its tiny horses. As you drive around the country you’ll see beautiful Icelandic horses in the fields all along the side of the road.  In fact there are an estimated 100,000 Icelandic horses in Iceland, so it’s no surprise that they’re easy to spot!

Why are Icelandic horses not ponies?

I learned almost straight away that you mustn’t call them ‘ponies’ – Icelanders are very particular about that and I was told off for it! I got confused by this as I thought a pony was just a small horse (shorter than 14.2 hands or 58 inches, fact fans!) – and the Icelandic animals are definitely small.  But I was told that ponies have proportionally shorter legs and wider bodies, whereas the Icelandic’s proportions are more horse-like.  Also apparently there is only one word in Icelandic for an animal of the equine persuasion, so they’ve gone with ‘horse’ as the translation.  So now you know. 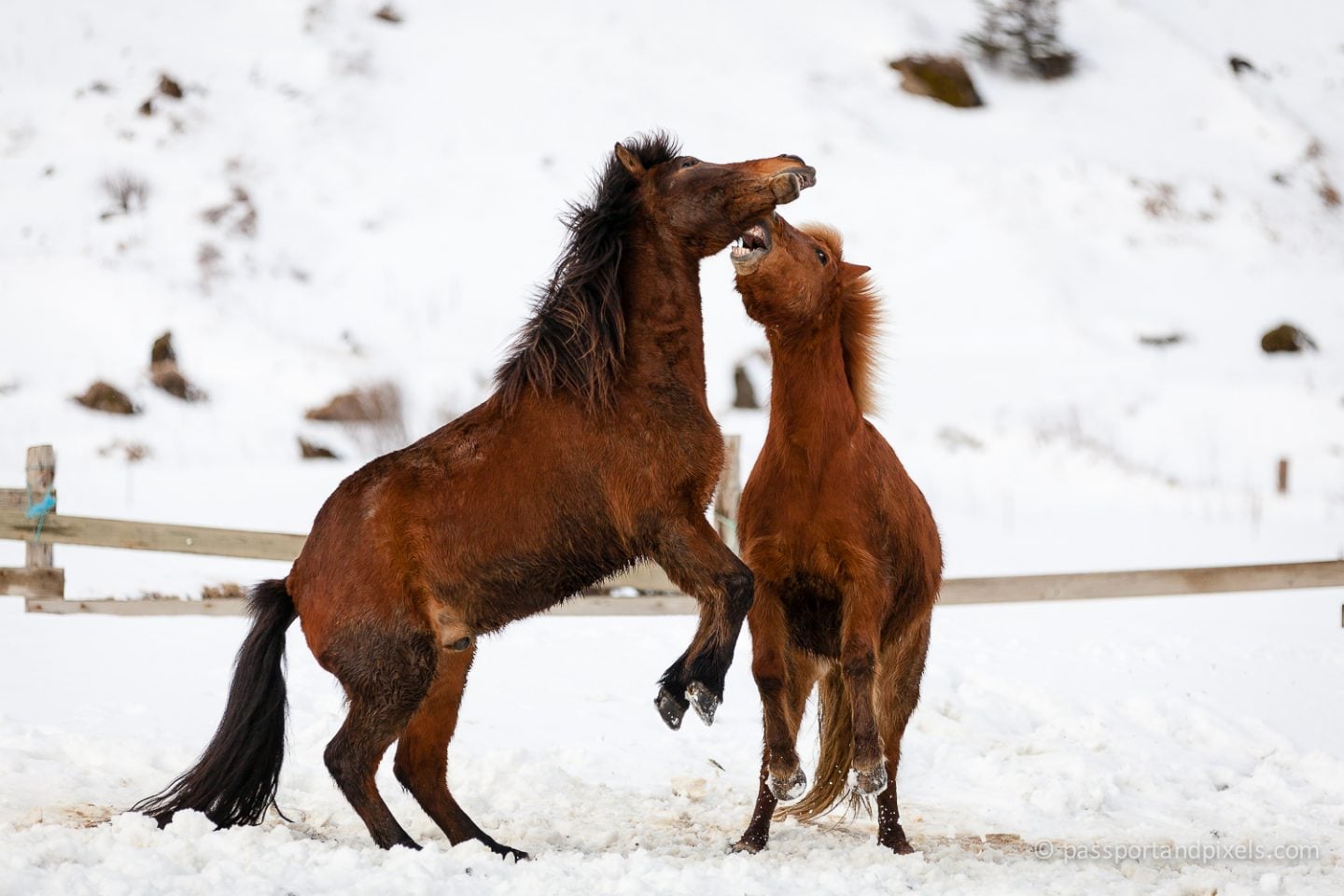 I’m pretty sure these two were just playing

Are the horses in Iceland wild?

Well, sort of. The horses are all owned by someone, but they are sort of half wild – they’re not pets as we might keep horses in the UK, and they are often left to forage for themselves in the Icelandic highlands with little to no care or supervision.

The Icelandic horse is a special breed native to the country and they’re incredibly protective of it.  It’s the only breed of horse in Iceland, and to protect them from foreign diseases Icelandic law forbids any horses from being imported into the country.  If you take your horse out of Iceland, you’re not allowed to bring it back!

What do they do with all the horses in Iceland?

Icelandic horses are mostly used for competition and leisure – there are many horse riding schools and competitions around the country.  In the highlands they’re also used to round up sheep – and sadly, they’re also bred for slaughter.  Much of the meat is exported to Japan, though horse meat was on offer in a couple of the restaurants I ate in.  I did try some, but I thought the flavour was very weird and strong and I didn’t much like it. 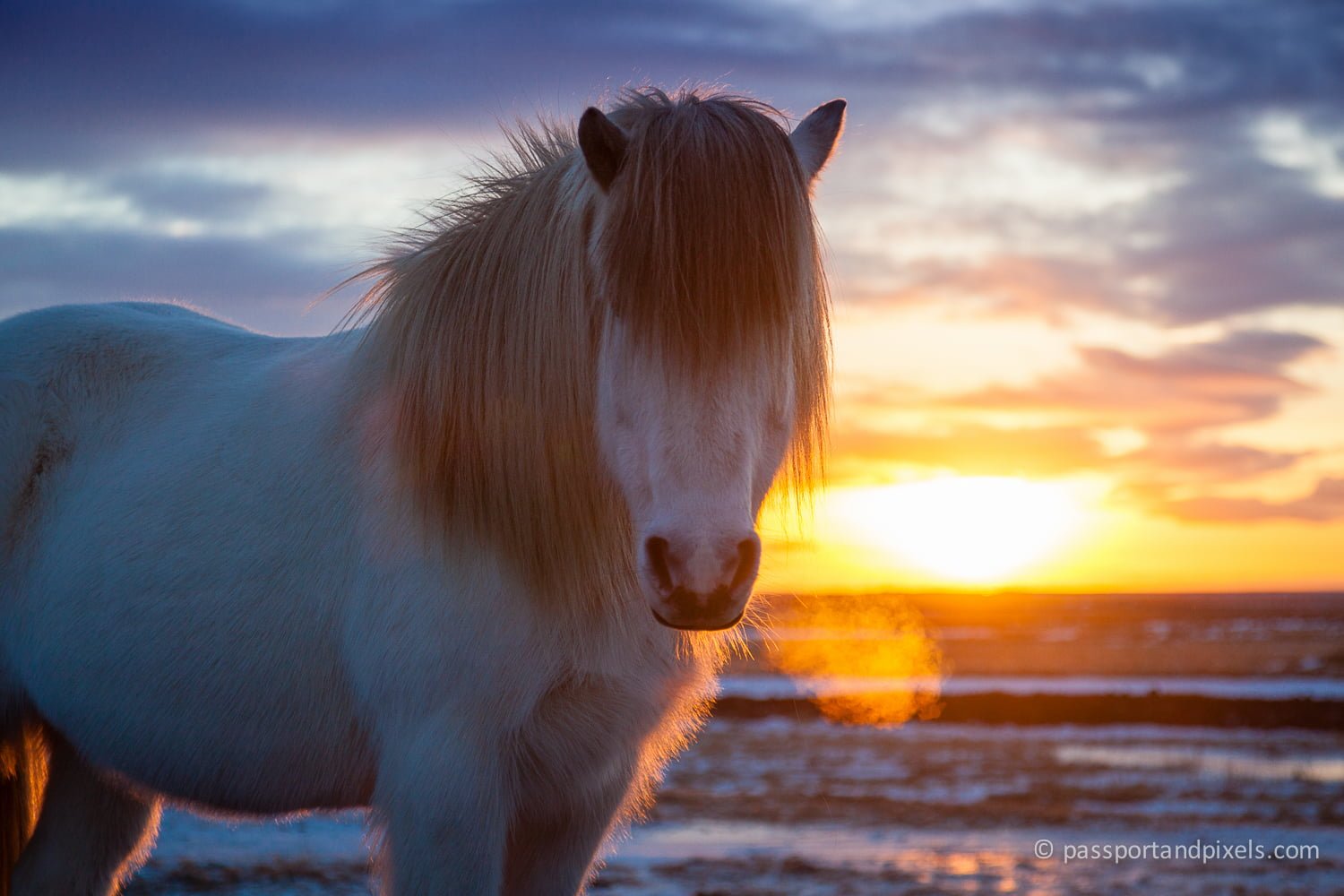 Can you ride Icelandic horses? Are they good for beginners?

Yes, absolutely. Although they are small they are very strong, and there are loads of riding schools where you can learn to ride them. And due to their gentle, friendly nature, and short stature, they’re actually great for beginners. A ride on an Icelandic horse is a really great activity to do on your visit to Iceland. 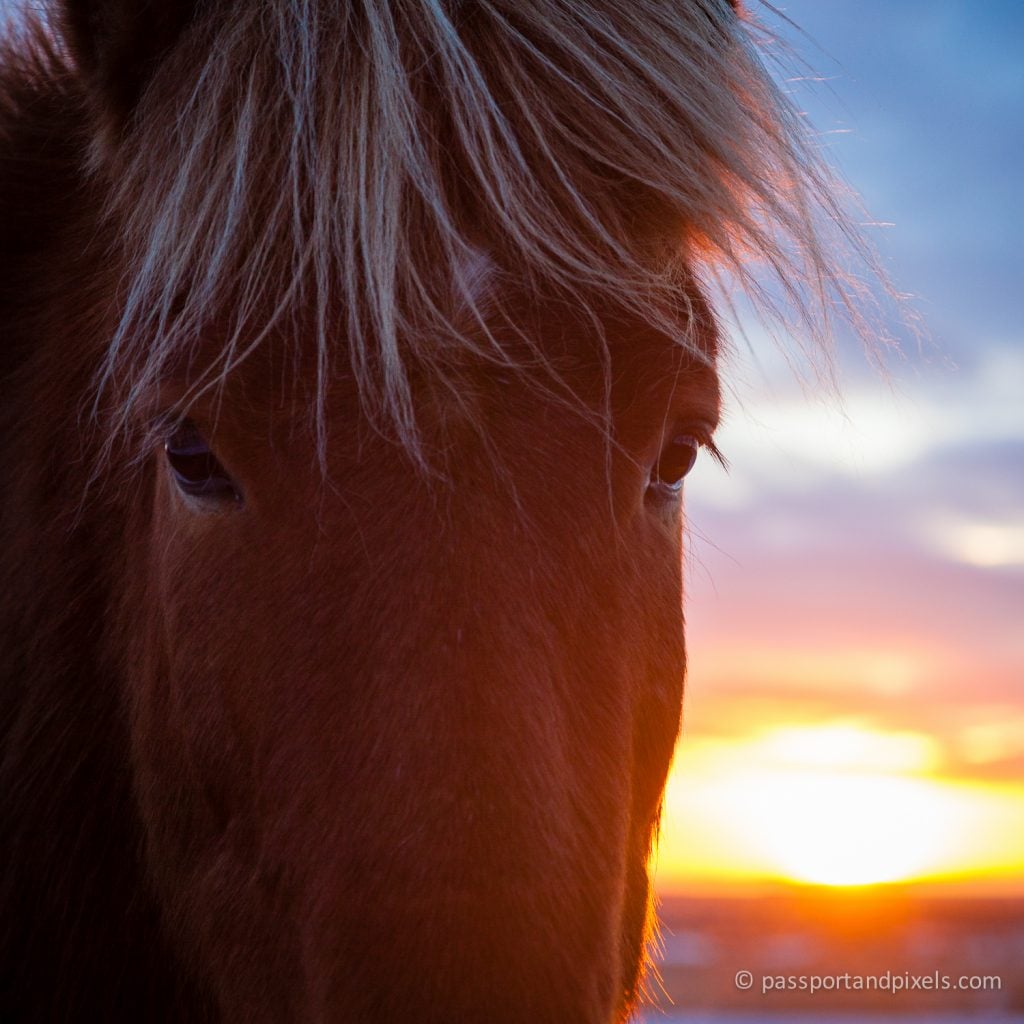 Yes! As you drive around Iceland, all along the main road you see horses in the fields.  I thought they were beautiful, and kept wanting to stop the car and get out to talk to them and photograph them.   They’re incredibly curious and friendly, which is very endearing, but also annoying when you’re trying to take a photo and they keep coming over to say hello!

But if you’re travelling round Iceland with kids, this will definitely be one of the highlights for them! 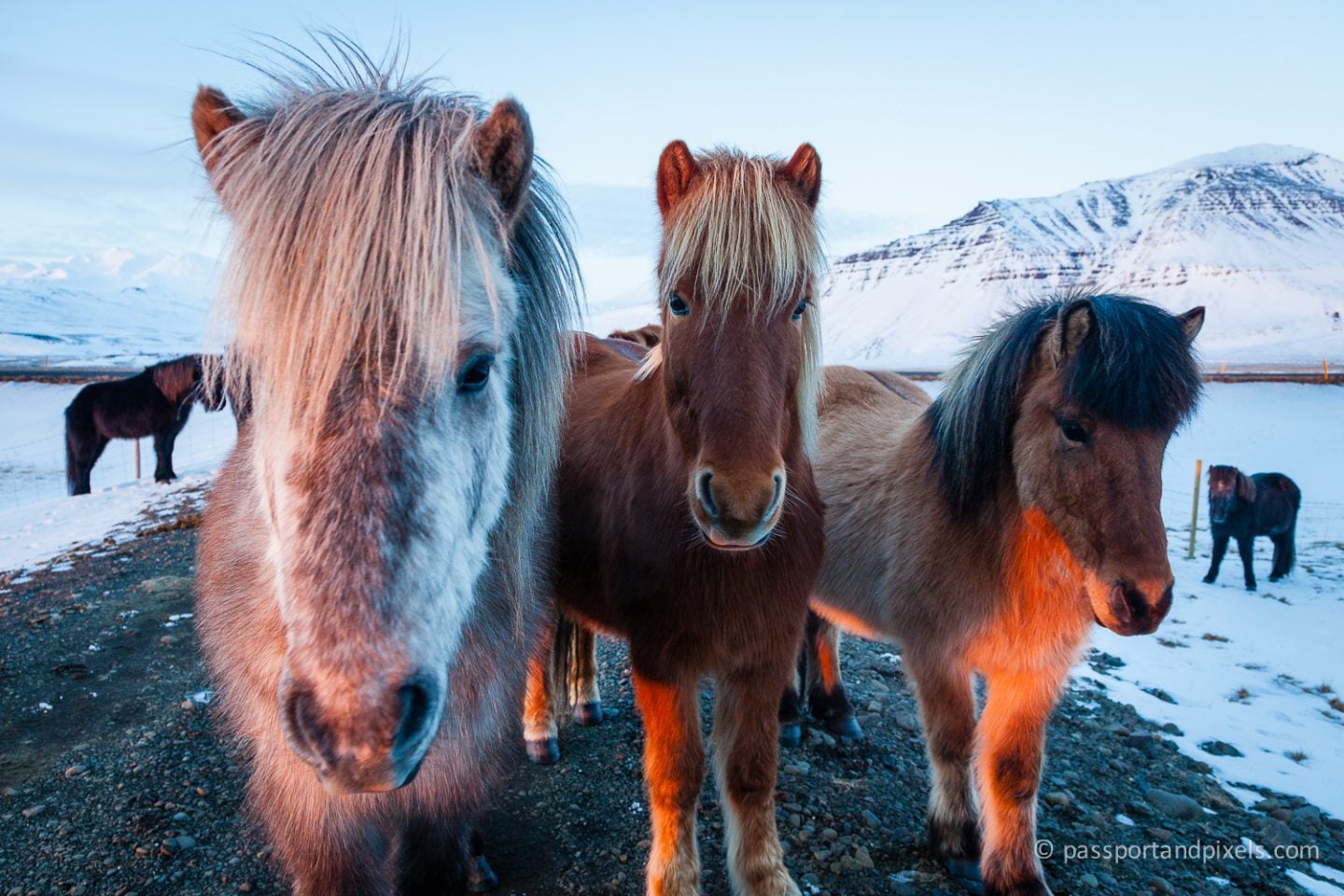 The first few days we were on a very tight schedule, so there wasn’t time to keep stopping.  And often there is nowhere safe to pull over, as there is no hard shoulder and few laybys, and traffic does come along the road pretty fast!  But on our third evening we drove past this group of horses standing on a ridge with the setting sun behind them.  I spotted them as we passed and felt that full-body pull many photographers will recognise, when you just HAVE to photograph something or you will always regret it. So I turned the car around and went back. 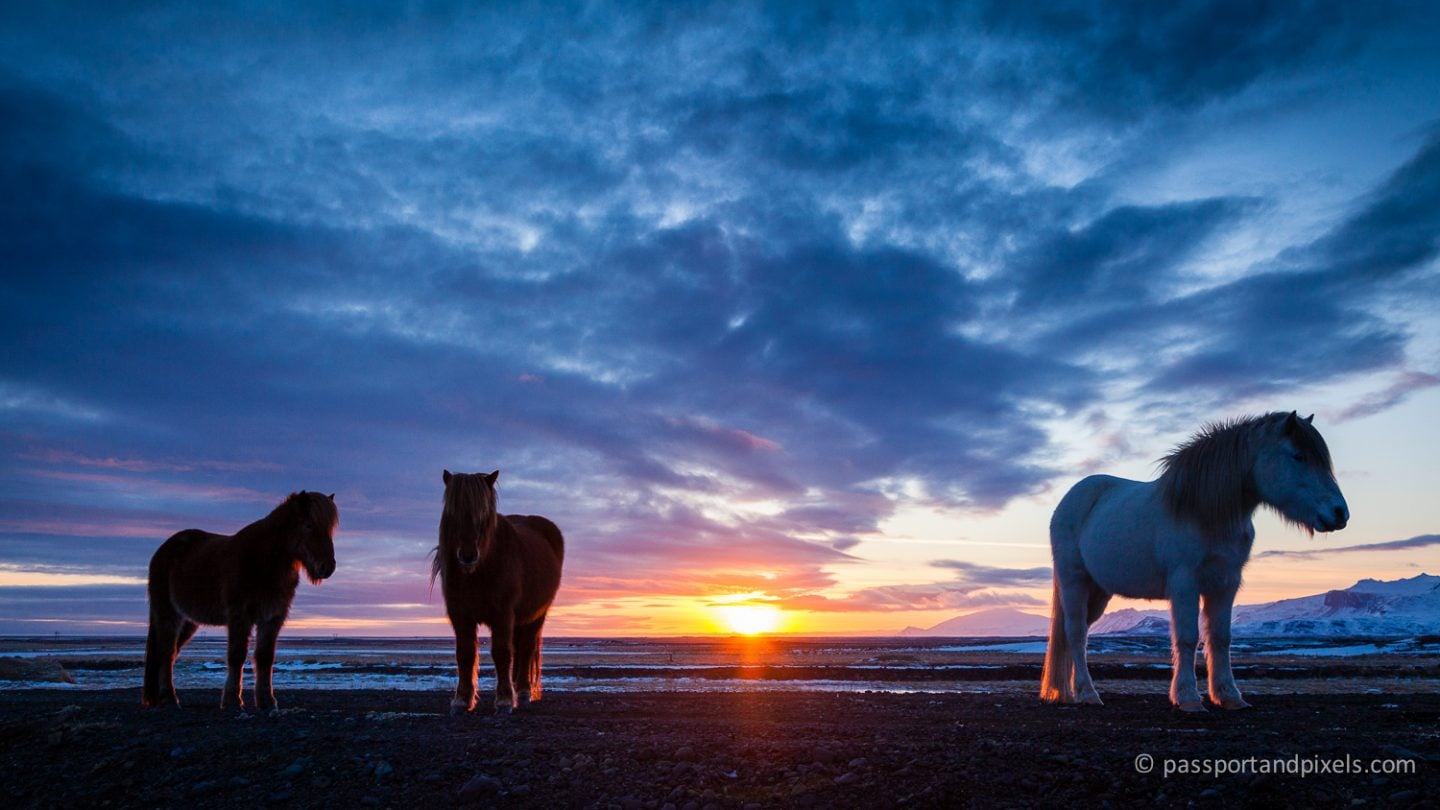 There was no gate, only a cattle grid, so it was easy enough to walk right into the field and get the right position to capture the horses with the sun behind them.

My colleague was a bit nervous at first – after all, we didn’t know how these animals might react to our being in their field – but he soon saw that they were very friendly and came to join me. 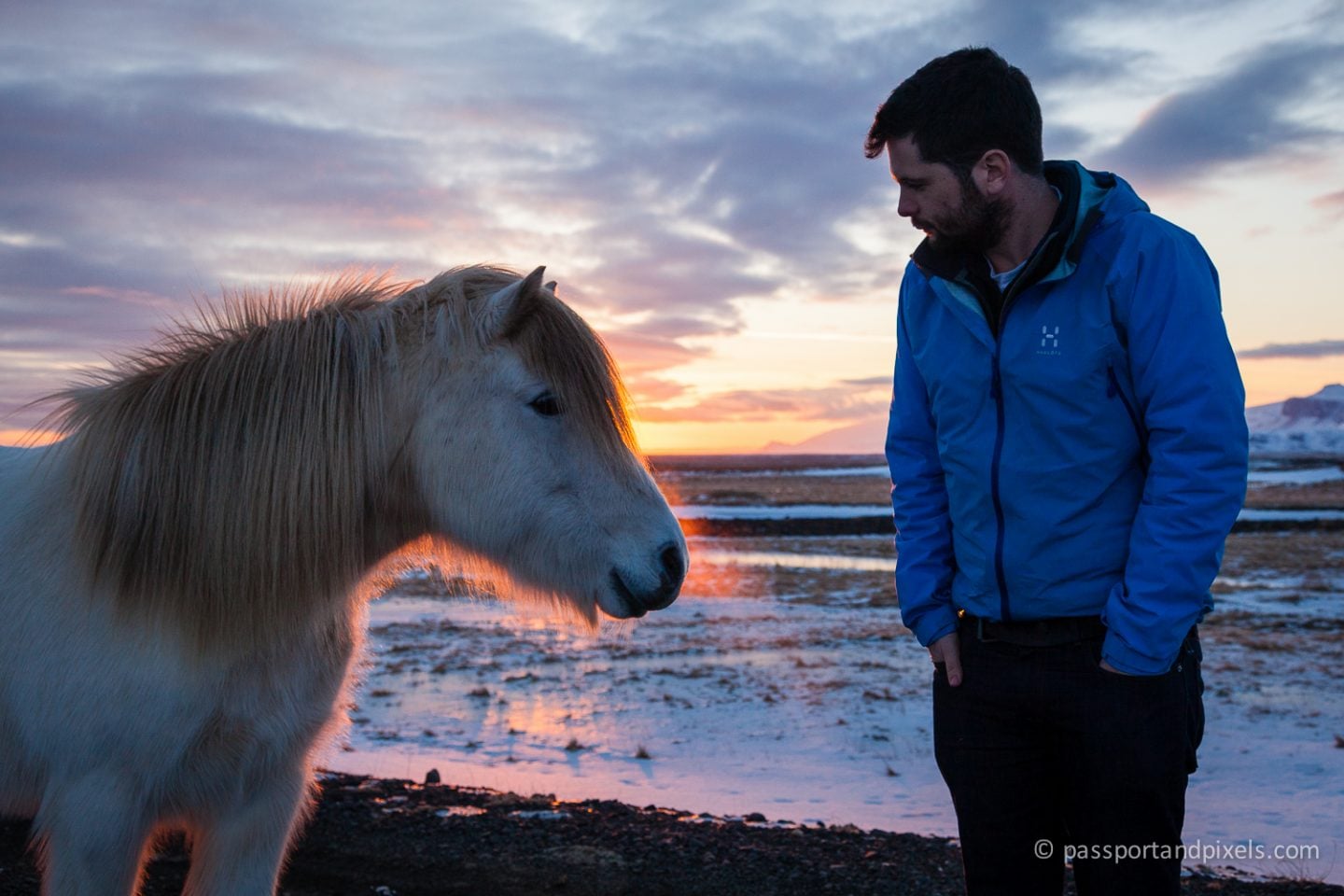 Icelandic horses in the wind

One other endearing trait I noticed was that, on windy days (and there are plenty of those!), all the horses line up like rows of soldiers with their bums facing into the wind!  I kept trying to photograph this but every time we stopped the car, the horses would immediately come over, so I could never get the shot!  You can see from the way their manes are being blown about how windy it was though. 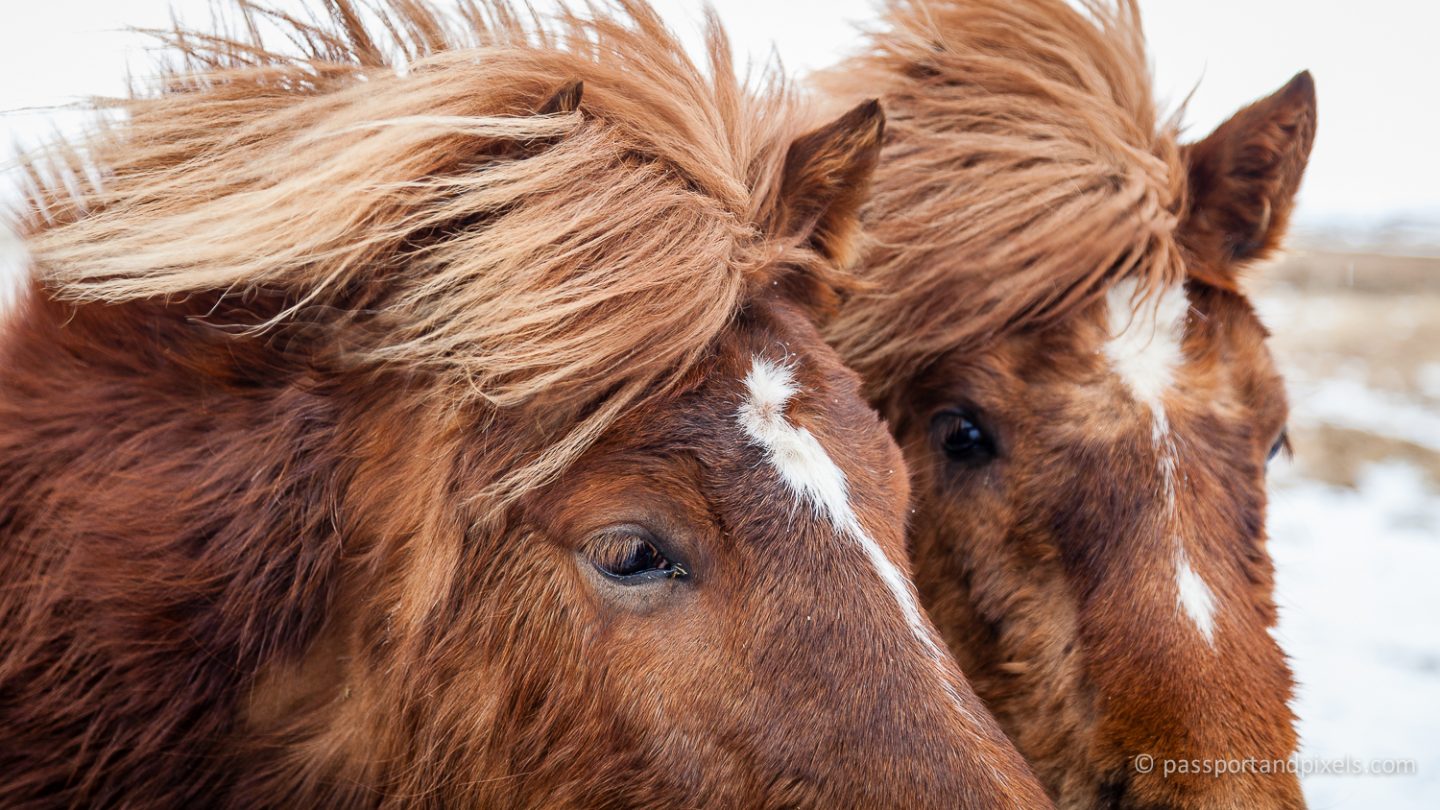 But I did manage to get some sheep doing it… 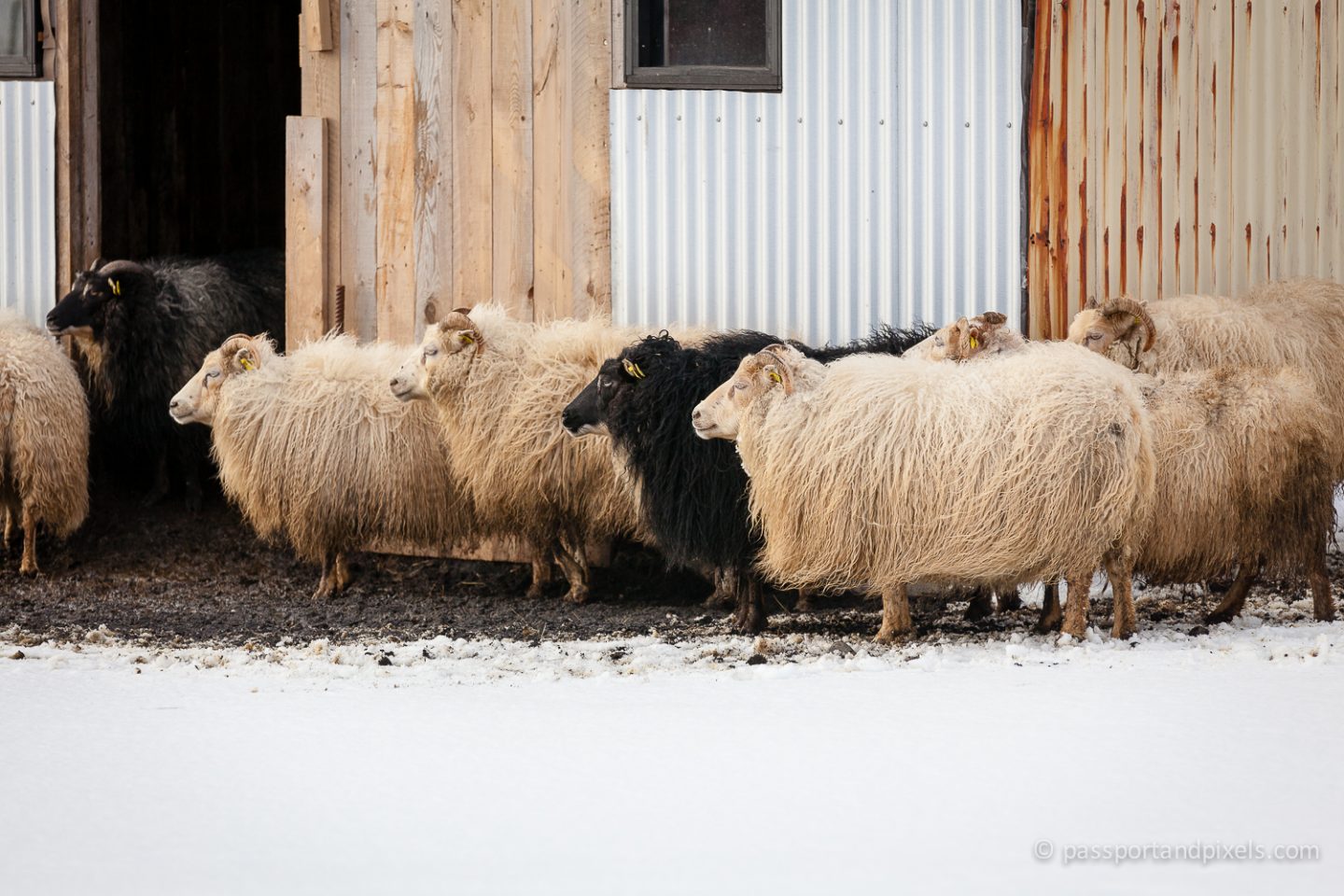 How Close Do You …

Glamping in the Sahara …

A Boat Cruise on …