Africa. The Serengeti. The Ngorongoro Crater. The names alone conjure up thrilling images of vast open plains, with hundreds of wildebeest peacefully grazing while a dignified herd of elephants cuts a ponderous path across the landscape.  Or of nature, red in tooth and claw: a cheetah stalking noiselessly through swaying grasses; a muscular lioness sinking her claws into a bewildered impala; a crocodile feasting on an unfortunate zebra.

We’ve all seen the photos. But how close can you actually get to the animals on safari?  How close was the photographer? Was he or she a mile away with a zoom lens the size of a family car? Will you be able to get as close, and what’s the best way to get photos of animals on safari to rival the ones you’ve seen online or in the guidebooks?

If you want to know, you’ve come to the right place. Because I’m not just going to tell you, I’m going to show you.  Behind the scenes, before and after. The fabulous wildlife photos, and the scene as it actually was, so you can really understand what it’s like and how close you can actually get to the animals on safari.

So here’s my story.  The photos behind the photos, the real truth behind the scenes from my safari in Tanzania. 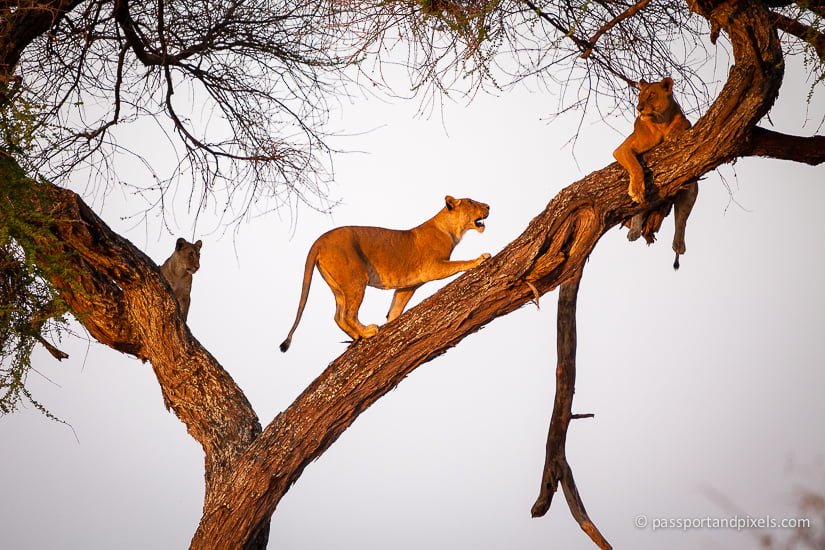 Behind the Scenes: The Car

First up, a bit of context.  I went to Tanzania with the aim of climbing Kilimanjaro.  But then I thought, well, since I’m going ALL that way, it’d be kind of rude not to do a Tanzanian safari too… After all, there a quite a few mistakes you can make on safari, but not going would be the biggest one of all!

But I didn’t want to book a private safari on my own because it would have been (a) stupidly expensive and (b) kind of awkward and lonely, all that time in a car with just me and the driver.  So I contacted a few companies in Tanzania to ask about sharing and one of them – African Scenic Safaris – came back to say that they had a booking that fitted my dates exactly, with a German couple who were happy for me join them on their safari to split the costs.

Alone on a Tanzania safari in the Serengeti

So for six days Tina, Mike and I got to know each other – and the Tanzanian animals – from the back of a pretty comfy 4×4 safari vehicle.  The car was similar to the ones all the main operators use: it had six seats in three rows, so every seat had a window.  It had a pop-up top for standing up and looking out, and was equipped with plug sockets for your battery chargers and a mini fridge for drinks.  Had it been full I think it might still have been a little cramped, but with three of us it was just perfect: it didn’t matter what side of the car something was happening on, all three of us always got a prime viewing spot.

My companions Tina and Mike

So with new friendships formed, and kit organised, off we went. First safari stop, the Ngorongoro Crater.  Where I quickly learned that the wildlife has no respect for the rules of the road.

There are loads of incredible safari destinations in Africa, but the Ngorongoro Crater is especially astonishing.  There are animals everywhere. Wherever I turned, I saw scenes that really wouldn’t have looked out of place in David Attenborough’s latest epic adventure.

Of course, if you’re lucky enough to be armed for your Tanzanian safari with a big zoom lens (more about the gear I took later on), wide shots like the one above can become this:

And that ‘is-that-a-lion?’ off in the hazy distance can become this:

How Close Can You Get to the Animals On Safari in Tanzania?

Don’t worry if you haven’t got an enormous lens, because as you’re about to see, the animals on safari in Tanzania are so accustomed to being gawked at and papped by tourists that they just ignore the cars and walk right past.  And this is true everywhere, whether you’re in the Ngorongoro Crater, or the Serengeti.  Sometimes they come so close you could even snap them with a smartphone (in fact I saw quite a few people doing this).

One downside of this is that when an interesting animal is spotted by the side of the road, every car for miles around will swiftly descend, and the Serengeti can swiftly start to feel rather like the M25 at 5 pm on a bank holiday Friday.  Which does slightly take the shine off the sense that you are out in the wilderness, at one with the animals in their natural environment.

But obviously the advantage of there being other cars around is that there are more eyes on the surroundings, and when you see a few cars all parked up in one place, you know there’s likely to be something exciting going on.

In this case that something turned out to be a group of lionesses returning from the hunt.  They passed right between the waiting cars and crossed over the road.

And just as we were wondering where they were headed, it became clear.  A group of cubs had been hiding in the undergrowth on the opposite side, and as the females approached them, the ran out to greet their returning mums and aunties.

Later that same day, we struck gold a second time.  Again, a queue of cars alerted us to the presence of something fantastic in the vicinity – this time a pair of young male cheetahs on the prowl.

They crossed right in front of our car, and then settled for a long time just on the edge of the verge, waiting for anything that might resemble a meal to pass by.

…but as you can see, you would have been ok without.  They really were butt-clenchingly close!

After a thrilling day getting up close and personal with some of the world’s most beautiful cats, we returned to our home for the night: Halisi Serengeti Tented Camp.

The two main options for accommodation when on safari are lodges, or tented camps. The lodges are essentially hotels, usually located outside the parks.  They tend to be fancier and more comfortable, with nice facilities, 24-hour power, and generous breakfast and dinner options – but as a result they’re more expensive.

The tented camps, on the other hand, are right inside the parks.  They usually consist of a group of sturdy safari tents, with a central reception / dining tent.  Obviously they’re not as luxurious, with no heating or air con and electricity only when the generator is running, but the lack of 5* facilities is more than made up for by the authentic, sleeping-with-the-animals experience.

In fact animals can, and do, regularly wander into the camps.  One night a herd of elephants came stomping through – and on another, it was buffaloes.  So once you’ve been escorted back to your tent after dinner, you have to stay very firmly put, just in case the animals decide to do a safari of their own!

But it’s not a bad place to hang out.  These tents were far swankier than any I’d ever slept in, as big as a smallish hotel room, with a proper bed, and even an ensuite bathroom!  Well it perhaps didn’t quite qualify as a bathroom, but it was certainly more of a bathroom than any tent I’ve ever slept in before…

And in the morning, if you’re lucky, you might get a friendly visitor while you’re having breakfast.

Back on the Road

After enjoying our eggs and toast with our unexpected guest, we headed back out into the park to seek out more wildlife-spotting opportunities.  And after driving around for a while we came across this handsome chap, resting with some females after a big meal, the remains of which were discarded to one side.

He was far too busy resting to pay us much notice, but the proximity of the lions to the car did make me a little nervous.  They were only a few feet away, and if they’d been so inclined, they could probably have leaped in through the open window before we’d known what was happening.   Fortunately though, they seemed quite happy just sitting in the sun, and weren’t in the least bit interested in the open can of fresh meat right in front of them.

Life and Death on Safari in Tanzania

Something that happens to you very quickly after a day or two on a Tanzanian safari is that you start to get blase about how many animals there are on safari.  On day one, you’re gasping with astonishment and firing off shots at every zebra, antelope and baboon that wanders past. But by day three, you’ve become so spoiled that you won’t even look out of the window at anything less than a big cat, a rhino, or a hippo.

And what’s worse, I was even losing interest in the big cats – or at least, the ones that weren’t doing anything.  We’d seen lions, cheetahs and leopards sitting, walking, and standing.  I wanted more.  I wanted to see something actually happening.  So when we saw this traffic jam up ahead, I was excited.  Could this be the action I’d be hoping for?

(Hint: it was – and you may find the next few photos distressing, for which I apologise.)

A lioness had just recently killed a wildebeest, and was looking for somewhere to hide her meal away from scavengers.  She gripped it firmly between her teeth and strained every muscle to drag her prize out of sight, but the wildebeest was heavy and it was slow going.

And as you can see from the behind-the-scenes shot – we had front row seats to the action.

It was a gruesome but enthralling scene: the wildebeest’s stomach exposed through the tear in its belly, and its glazed eye the deadest thing I’d ever seen.  To be that close to such a scene of life and death, to the ecstasy and agony of the natural world, was intoxicating.

Needless to say I took a LOT of photos, and we stayed until the lioness grew tired of her efforts, and prowled away, leaving the wildebeest by the side of the road.  We waited to see if she would come back, but we never saw her again.

Getting to grips with the bazooka lens (and beanbag)

What Camera Gear do you Need for a Safari in Tanzania?

For those of you who are interested, here’s the camera gear I took on safari (after much soul-searching):

I buy pretty much all my gear from Wex Photographic.  Their prices are as good as any on the market, their service is great, and they have a really good range of second-hand gear too (which is something I can’t recommend highly enough!)

Liked this? Pin It!’

How To Take Great …