This is Part 2 of my trip to Uganda’s most popular National Park, Queen Elizabeth.  It contains more wonderful wildlife, some song lyrics, and three too-close-for-comfort encounters, so if that sounds good, read on!

Part 1 includes epic landscapes and masses of gorgeous photos of animals, including elephants and a stunning leopard, so if you missed that, go and check out Craters & Creatures in Queen Elizabeth National Park, Uganda

Going for a run in Queen Elizabeth Park

After a busy first day, we headed back to our accommodation for the night: Bush Lodge, a riverside tented safari camp situated inside Queen Elizabeth National Park (for a review of the camp, scroll to the bottom).   As we’d been on the road for a few days I was starting to get twitchy, and really wanted to go for a run to stretch my legs and get the blood pumping, so I asked one of the staff at the lodge if it would be safe to do so.

They wouldn’t recommend it, he said, as there might be wild animals around, but it was up to me.  So I decided to take the risk, reasoning that it was still light, we were quite near a busy road, and that if I kept to the paths and didn’t go too far, I’d be fine.

So off I set.  And it wasn’t long before I had my first encounter.

This baboon made me a little nervous: baboons are powerful and can be extremely vicious, but he didn’t seem to be all that bothered by my presence.  Passing cars were slowing down to look too, though whether they were looking at the baboon, or the red-faced and sweaty white woman with her phone out, I can’t be sure!

It was on my way back from my run, however, that I had a rather more worrying encounter.  I’d done a cautious 6k or so, and was almost back at the lodge, when this happened:

I tried approaching him in the hope that he might be scared of me and run away, but whenever I got too close, he immediately adopted an aggressive pose, looking like he might charge at me, so I quickly backed off.  I did wonder if I’d be able to sneak past him on the other side of the road, but it didn’t seem worth the attempt.  Warthogs, though small, are little power packs, and I really didn’t fancy coming into contact with those tusks!

It seemed like there was no way past him. I’d told my friend Linn that I’d be gone for no more than 45 minutes, and fairly soon she was going to start to worry.  So I sent her one of the most ridiculous texts I’ve ever sent in my life! 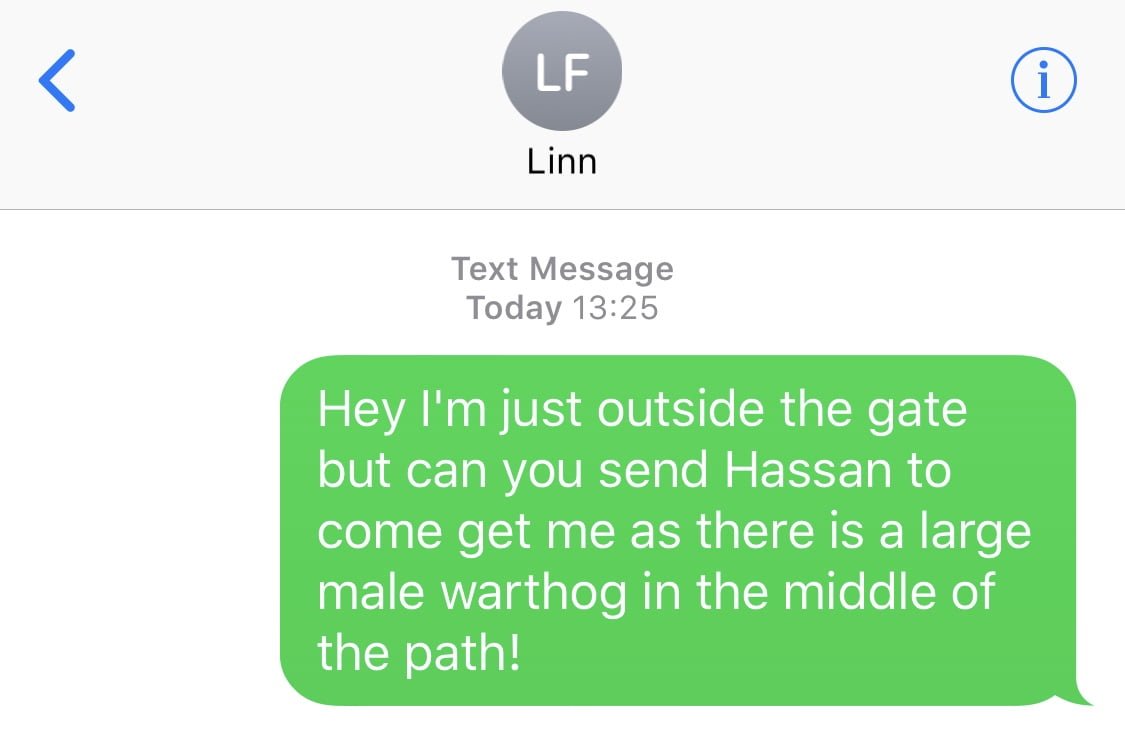 But no one came.  Linn wasn’t checking her phone.

Luckily, after about another 20 minutes, a car came past.  There was a hairy moment when the warthog, running away from the car, ran directly towards me, but before he reached me he dived into the undergrowth.  The driver stopped to check I was ok, which of course I was now!  Just happy to be able to head back to the camp for dinner.

For another, even more dramatic close encounter, read on!

Read More: How to Spend Two Weeks In Uganda The next day we set out early for a second drive in the park, armed, as usual, with a packed breakfast and all the camera gear a girl could wish for.

Having spent the night listening to hippos grunting in the river from the relative safety of a safari tent, it was a thrill to actually see them in real life, at sunrise, wallowing in a mud hole.

Seeing them just chilling out here completely reminded me of the chorus from the Flanders and Swann song, The Hippopotamus:

Mud, mud, glorious mud!
Nothing quite like it for cooling the blood.
So follow me, follow
Down to the hollow
And there let us wallow
In glorious mud!

Which of course I had on the brain for several hours afterwards!

Hippos in a mud hole in Queen Elizabeth Park, Uganda

If one of the hippos in this mud hole is the would-be lover from the song, then perhaps this one, off for a stroll in the morning light, is the ‘The fair hippopotama [who] he aimed to entice / From her seat on that hilltop above’? 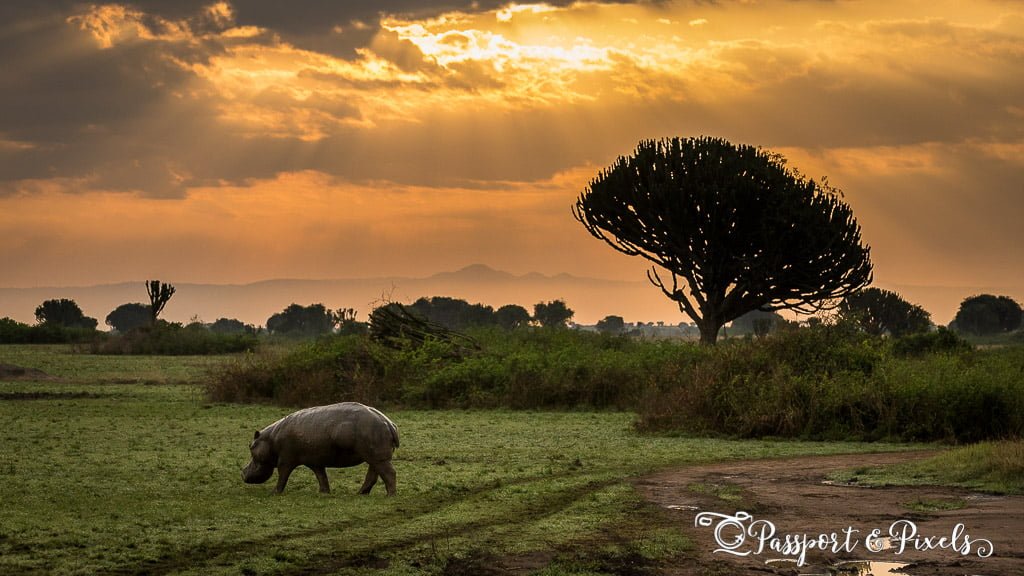 Who knows?  Not even sure if this is a male or a female, to be honest, but I’m quite taken with the idea that this is she, ‘tiptoeing down to her love’.

What birds can you see in Queen Elizabeth Park?

As well as plenty of hippos, we also saw a whole host of birds, most of which were far too quick for my still-sleepy shutter finger!  Queen Elizabeth National Park is home to over 600 bird species, including this handsome African wattled lapwing…

We spotted this merry bunch when we stopped to eat our packed breakfast by another crater lake, this one salty and dried up.  This is Lake Katwe, which is so salty that they actually mine salt here – you can see the piles of mined salt, covered with protective tarpaulins, on the far shore. Near to the crater was this thorny bush which the weaver birds had obviously made their home.  Dozens of them congregated there, flying away and returning, hopping and chattering, so I decided to postpone breakfast and set up with my camera as close as I could instead.  Who needs an egg sandwich when there’s a great photo opportunity to be had?! The one animal I had yet to see, anywhere in Uganda, was a lion.  There are lions in Murchison Falls National Park but sadly we didn’t spot any, so I was especially hopeful of finding one in Queen Elizabeth, which is famed for its lions that climb trees.

On the second afternoon, Hassan heard reports of a lion sighting in one sector of the park.  We knew we’d found the right spot when we came across a crowd of parked cars, all clearly there for the same reason.  There were no lions to be seen, and so quite a few people had got out of their vehicles, which I thought was an utterly idiotic thing to do given that the very reason they were there is because there were lions nearby! 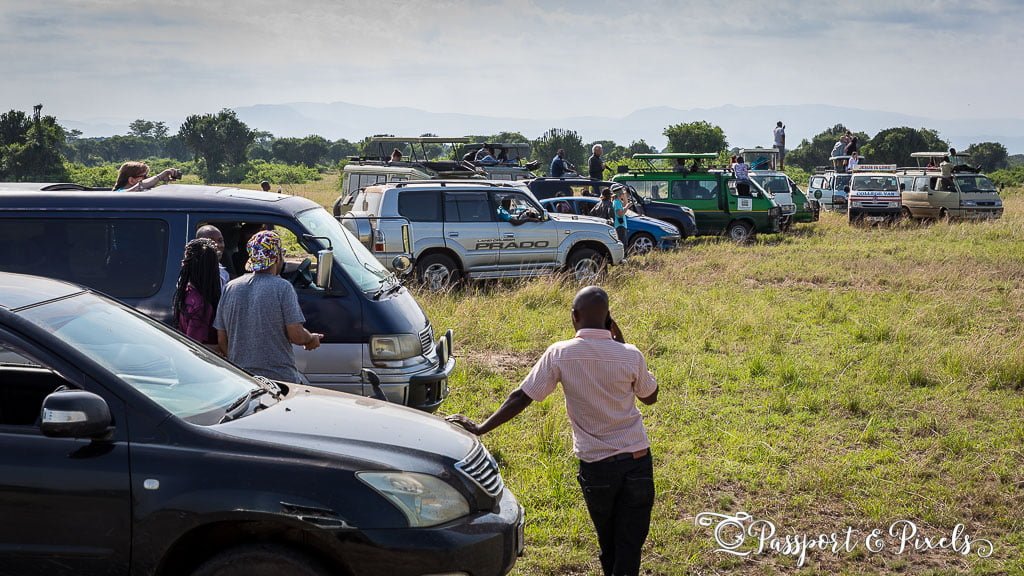 But fortunately for these morons the lions were nowhere to be seen, so after waiting a while we decided to move on.  It was too hot, and once lions find a place to rest for the day, they don’t tend to move again until the evening, so the chances of them coming back any time soon was slim.

Later on we drove south into the Ishasha sector of the park, where the tree-climbing lions are said to hang out.  The road was bumpy and I really needed a wee, but Hassan wouldn’t let me get out of the car for obvious reasons!

We drove for about an hour, stopping each time we passed a car coming the other way to ask about lions.  Two people said they had seen the same one in a particular tree, so Hassan followed the directions and soon enough, we found him.

Look at him, super chilled out, just having a little nap in the sunshine.  We watched him for a while, and then Hassan made noises like an injured buffalo which soon had him sitting up and looking about.

There are 75 lions in Queen Elizabeth National Park, although numbers have been decreasing due to conflict between the lions and local villagers, who object to the cats taking their cattle and respond by killing them.  The Uganda Wildlife Authority has tried to stop this by giving 20% of the profits from tourism back to the communities, and by compensating any farmer whose cow is eaten by a lion.

This appeared to be working just fine, until just a few days after we were there, a horrifying eleven lions were poisoned by local people in revenge for killing their livestock.

The dead lions, eight of them cubs and the other three adult lionesses, were part of a pride that also included three males.  The carcasses and bones, discovered near a fishing village called Hamkungu, were sent to a regional town for testing.  Experts suspect the lions were poisoned with alidcarb, an insecticide.

I sympathise with the villagers’ plight, but I honestly can’t imagine anyone wanting to destroy an animal as fierce and beautiful as this. We watched him for a while, breathless with excitement, and obviously I took dozens of photos.  Then two more cars arrived and parked up, and again the passengers got out of the car – even with a lion right there!  How stupid are these people?!

Of course, when he suddenly got up and jumped down from the tree, they moved pretty damn quickly to get back in the vehicle!

A Review of Bush Lodge in Queen Elizabeth National Park

Bush Lodge is a tented safari camp situated inside Queen Elizabeth National Park.  It consists of a selection of cabins, and en-suite and non-ensuite safari tents, sheltered under thatched roofs.

Bush Lodge is located right on the banks of the Kazinga Channel, and also has a bar and dining area, where delicious meals are served by candlelight under (if you’re lucky) a starry African night sky. We went for the cheapest option, a non-self-contained tent, which gets you a cosy little space with a shared bathroom block a short walk away.

Of course, the beauty of staying at Bush Lodge, which is inside the park, is that animals can – and do – come into the camp.  As I discovered when I went to use the bathroom block late on the second evening.

Hippos are among the most dangerous animals in the world because they’re highly aggressive and unpredictable.  It’s said that they kill around 3,000 people a year – so to find one just calmly grazing in the middle of the camp nearby was somewhat alarming!  I think the guy who came out of the bathroom to find me filming was a little surprised too!

Fortunately there was an armed security guard close by, keeping an eye on the animal.  I’m not entirely sure he’d have been able to do much against a furious 3-tonne hippo if it decided to charge, but luckily this one was perfectly happy just chilling out and having dinner.

Thanks for reading!  If you’d like to read more about Queen Elizabeth National Park, go to A Boat Trip on the Kazinga Channel, Uganda

Or for more on Uganda, why not try 28 Top Things To Do and See in Uganda

Ever had a close wildlife encounter like these? I’d love to hear your stories – so please post them in the comments! 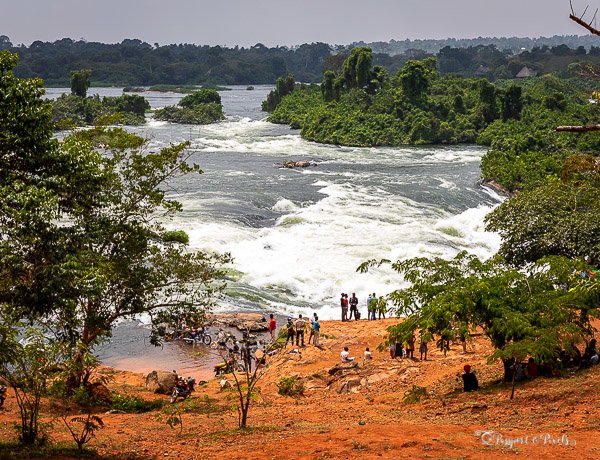 The Amazing Animals Of Uganda: A Photo Guide