No visit to Uganda is complete without a visit to Queen Elizabeth National Park.  If you want to see wildlife, and you only have time for one park, make it this one.  Trust me, you won’t regret it.  You can thank me later.

Map of Uganda showing Queen Elizabeth on the western border

And before you even get to the animals, the park also boasts some of the most jaw-dropping landscapes anywhere in the country.

Situated on Uganda’s western border, right on the equator, Queen Elizabeth National Park sits on the edge of East Africa’s Rift Valley – which you can read more about in my previous post here. The Rift Valley was formed by the pulling apart of two tectonic plates, and this literally earth-shattering movement millennia ago caused the formation of some truly magnificent vistas. 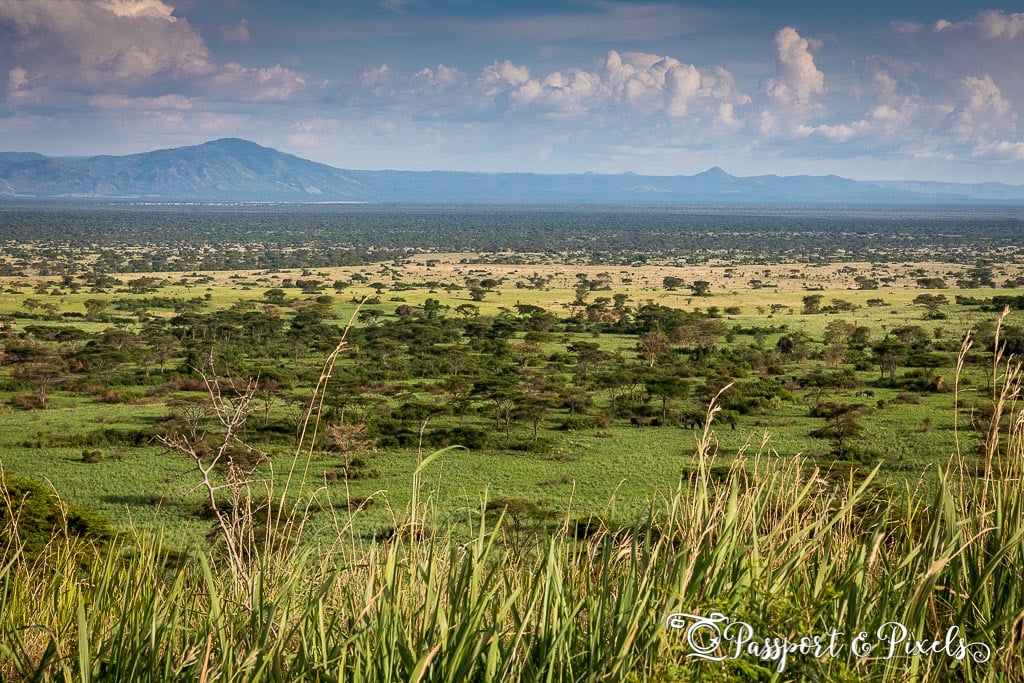 As you drive through the park, you’ll see not only deep flat plain of the valley itself, with the jagged Rwenzori Mountains in the background, but also rolling green hills, dozens of enormous craters belonging to long-extinct volcanoes, sparkling lakes, and the wildlife-filled Kazinga Channel (about which more in Part 3, coming soon).

I travelled to Queen Elizabeth National Park as part of a two-week trip round the West of Uganda with my friend and fellow travel blogger Linn from www.travellinn.net, and our wonderful driver-guide Hassan.

Hassan with our trusty vehicle

We came by car from Kibale, where the previous day we’d had an incredible experience tracking chimpanzees in the forest. The journey from Kibale to Queen Elizabeth by road took just three hours, so we were able to have a lazy morning and still be there in plenty of time for lunch – very civilised!

In the afternoon Hassan took us for our first look at the park. I was expecting animals, of course, but what I wasn’t prepared for were these stunning landscapes!

This area is called the Katwe craters, or Katwe-Kikorongo explosion craters.  It’s a volcanic field of around 81 square miles, pocked with ancient craters like the surface of the moon – except greener.  And my God the place is green! I thought I’d seen the colour green before, but I was wrong.  There were so many different shades, I literally had trouble adjusting my eyes to the brightness of it all!

Each crater was formed individually by violent volcanic explosions over the last 1 million years. There’s no ancient lava flow here, which means the explosions were just violent bursts of hot gas and steam that erupted out of the ground like a bomb going off, leaving this ravaged surface.

The size of the individual craters varies, but the largest can be nearly two miles across and up to 100 metres deep. Many of them have now evolved into saltwater lakes like this one, which may look inviting, but be warned – the water is highly acidic and stinks of sulphur.   You definitely don’t want to take a dip, no matter how hot you might be! 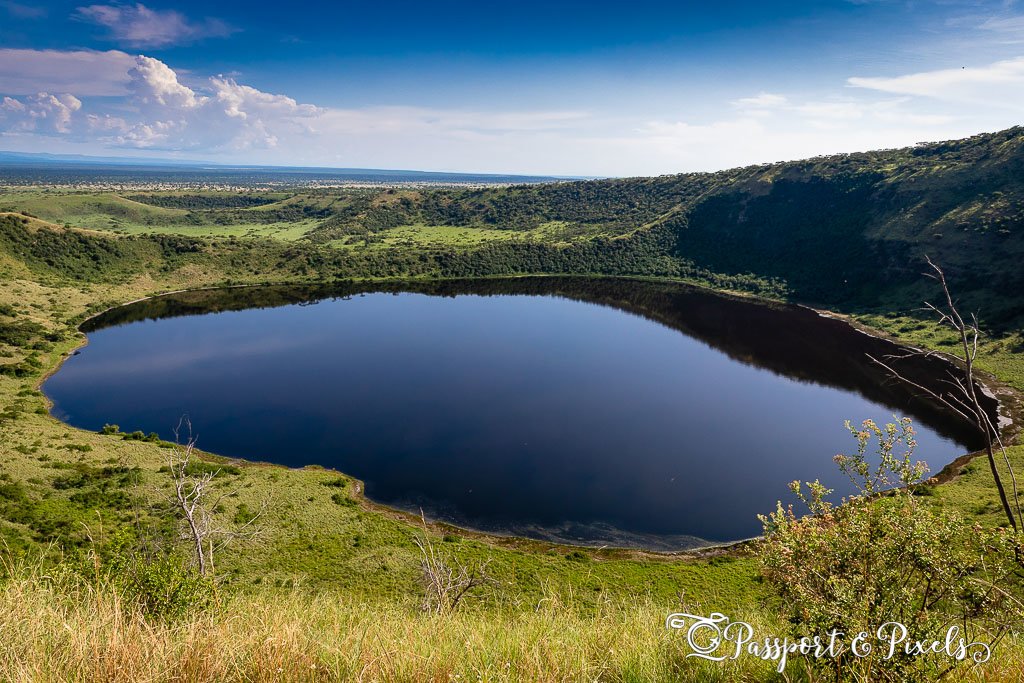 Obviously in a stunning landscape like this you simply HAVE to stop to pose for photos, even if you’re the sort of person who looks less like an Instagram model and more like a primary school teacher on a class outing. 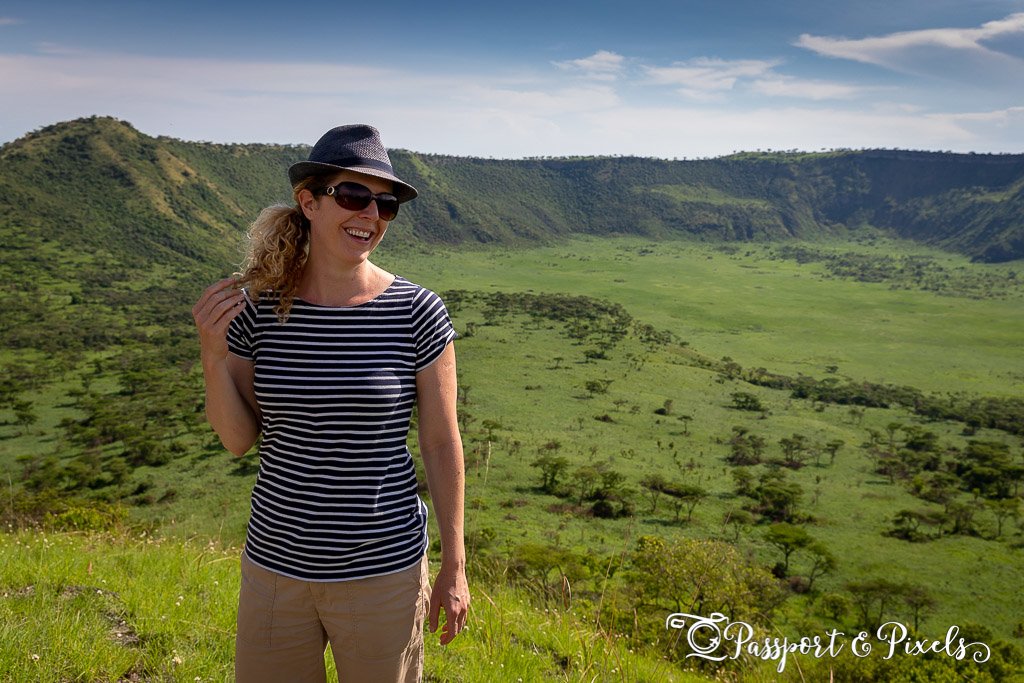 ‘But what about the wildlife?’ I hear you cry.  ‘You promised wildlife!  And we’ve read this far, and there hasn’t been any!’

Ok, ok, how about some lovely elephants?

As we left the crater area, driving up and over the crest of a hill, Hassan spotted two elephants by the side of the road, and slammed on the brakes. And at precisely the same time, I saw another four on the opposite side, and squealed with excitement.

And they were so bloody close to the car that I was able to get amazingly detailed photos like this one. 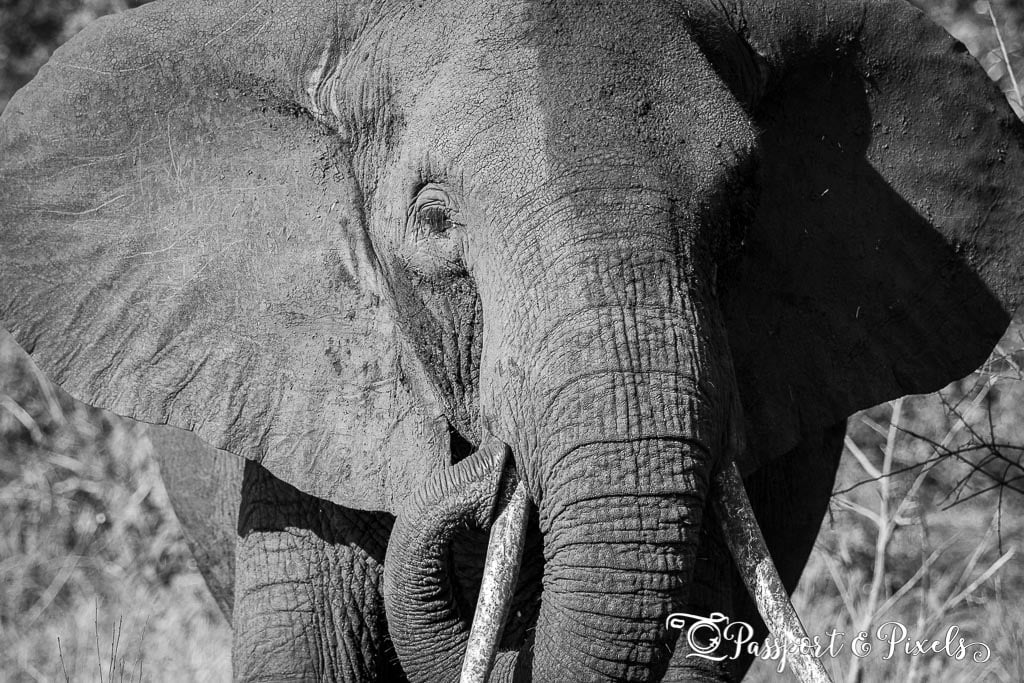 Being so close to such incredible wild animals is an amazing experience.  Hassan shut off the engine, and all we could hear was the puffing of their breathing, the crackle of twigs and grasses under their feet, and the munching noises they made as they ate.

But we were also reminded how dangerous they potentially can be, when the largest one, a big male, decided to cross the road directly behind our car.  Halfway, he turned and looked at us, and it was quite clear that he wasn’t happy about our presence at all.  He stopped dead in the middle of the road, and began puffing and blowing and flapping his ears: it wasn’t entirely clear if he was confused, angry, or upset, but he certainly wasn’t comfortable with us being there.  We all sat very still, nervously waiting to see what would happen, and wondering if we were about to come back with a rather more exciting travel tale than we’d anticipated.

Happily, though, our new friend eventually decided we weren’t a threat, and went on his way.  Hassan told us afterwards he’d had his foot on the accelerator and his hand on the ignition the whole time, just in case we suddenly needed to make a rather urgent getaway.

At little further on we saw another herd of elephants, this time with several babies.

And later we saw even more.  Each time they were right by the side of the road so we could park close to them, watch them in detail, and take more photos than anyone could ever possibly need!

We must have seen around three dozen elephants in total.   And in all that time, we never saw a single other vehicle.  We had our part of Queen Elizabeth National Park entirely to ourselves.   You don’t get that in the Maasai Mara, that’s for sure! 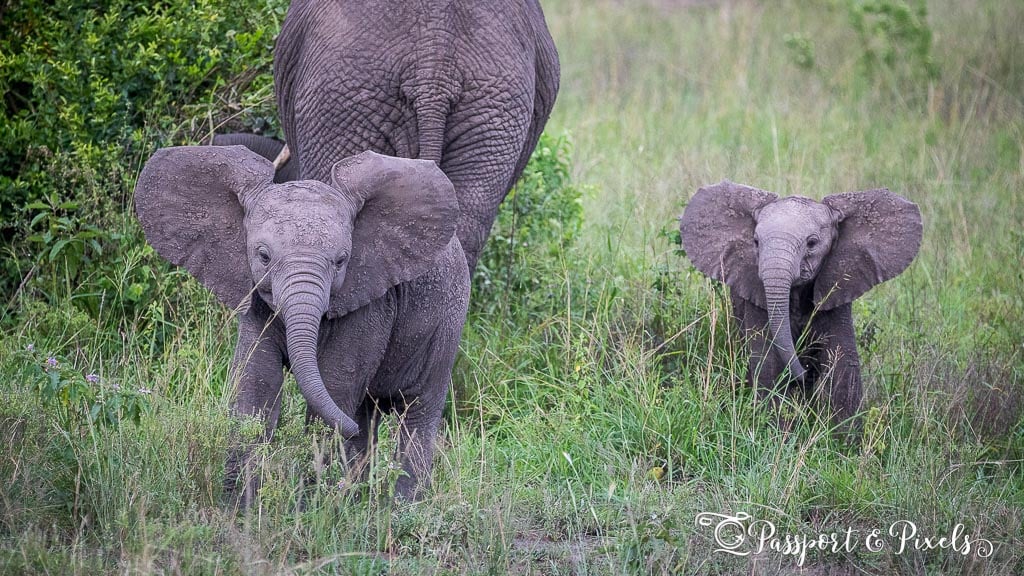 As the day drew to a close it was time to head to our lodge for the night.  But there was just one more thing to see.  From speaking to park rangers and other drivers Hassan had heard that a leopard had been spotted in a large cactus tree, so he decided to see if he could find it for us. I think leopards are probably the most beautiful of all wild cats, so I was pretty excited.

He only had a sketchy idea of where this particular tree was, but he followed the instructions as best he could, and we peered intently at every tree we passed, looking for those tell-tale spots, and eventually we saw a particularly big one with several other cars parked by it, and knew we were in the right place.

And MY GOD were we in the right place.  Take a look at this beauty.

The female leopard was sitting poised, relaxed yet alert, on a branch about halfway up the tree, just a little above my eye level as I stood up in the back of vehicle with the top popped up.  She could not have been more perfectly positioned if I’d been able to choreograph the scene myself: we were able to park the car directly in front of her, and admire her from a distance of no more than a few metres. If she’d wanted to, I’m pretty sure she could have jumped off the branch and pounced right onto the car.

She was so close I was even able to take this video, just with my phone!

I’ve never seen a leopard that close before, or been able to sit and watch one for so long.   I did see this beauty in the Serengeti in Tanzania a couple of years ago, but Uganda’s offering was next level. 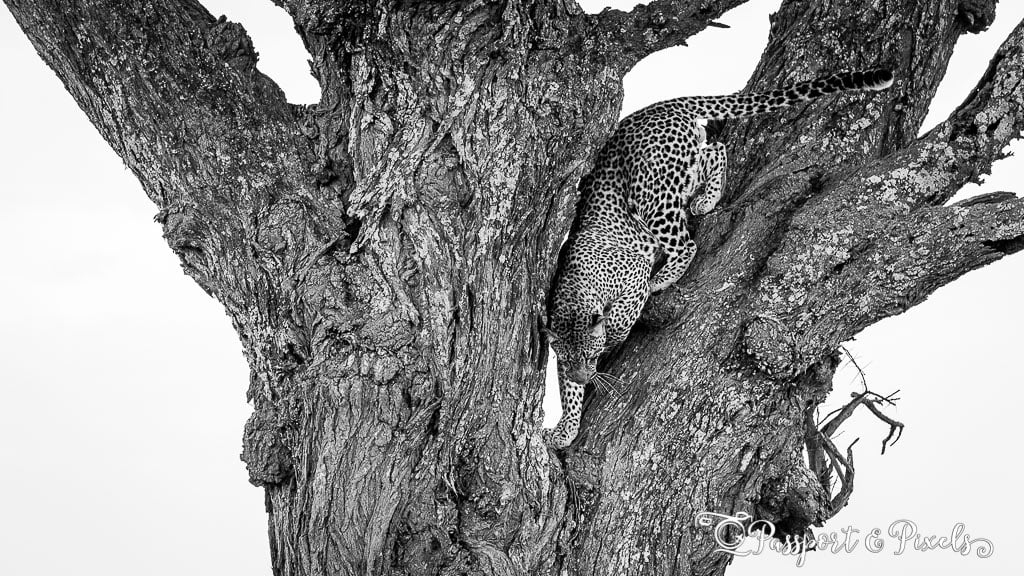 The next day we saw loads more wildlife, and I had run-ins with a hippo and a warthog.  To read this, check out the photos, and if you want to know where we stayed, click here to go to Close Encounters in Queen Elizabeth National Park.

An Afternoon in Kibale, Uganda

Video: My Third Month In Uganda