In my previous post about Myanmar’s Buddhist monks, I noted how photogenic they are.  With their shaven heads, red robes, and peaceful expressions, they have this amazing ability to step into a location, no matter how dull or ugly, and transform it into an eye-catching scene.

You see them everywhere.  Mornings are the best time, when the monks travel from house to house collecting offerings of food.  Families give readily because they believe that making donations helps them to earn merit, which will give them a better rebirth when they are reincarnated. 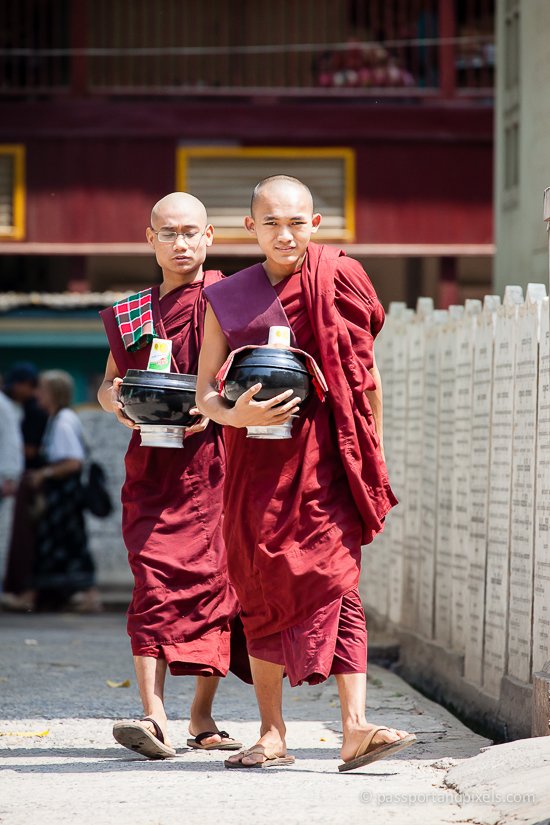 But of course the one place you’ll be absolutely guaranteed to see monks in abundance is inside one of the monasteries, many of which welcome visitors.

Myanmar is one of the most devout Buddhist countries in the world. Nearly 90% of the population is Buddhist, and there are about half a million monks and 50,000 nuns.  They’re all based in one of the country’s many monasteries.

Most boys will enter a monastery twice in their life.  First, aged from around 10 years old, as a young novice. 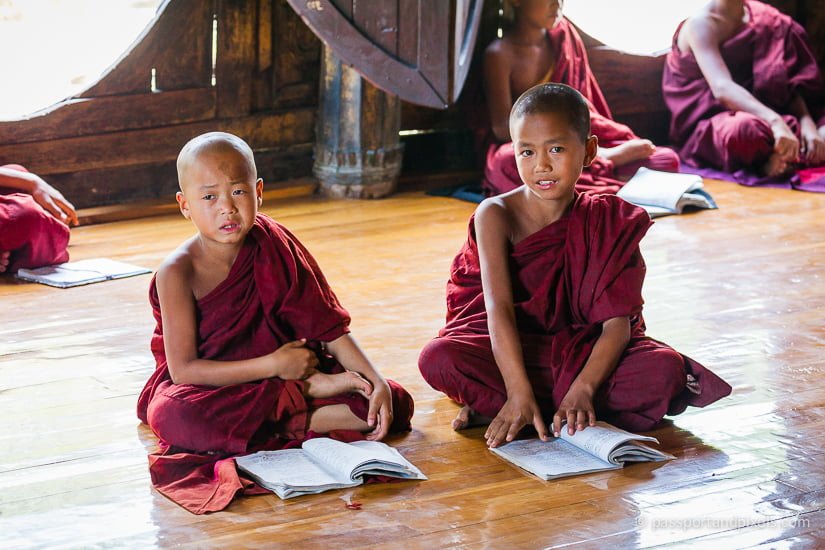 The novices are expected to stay in the monastery for a few months at least, learning about the Buddha’s teachings, living a life of discipline and following the Ten Precepts.  These are a series of ethical rules: like not killing and not stealing, which you’d hope would be pretty standard for everyone – though others, like not eating after midday and not singing or dancing, sound slightly harder for a 10-year-old to stick to. 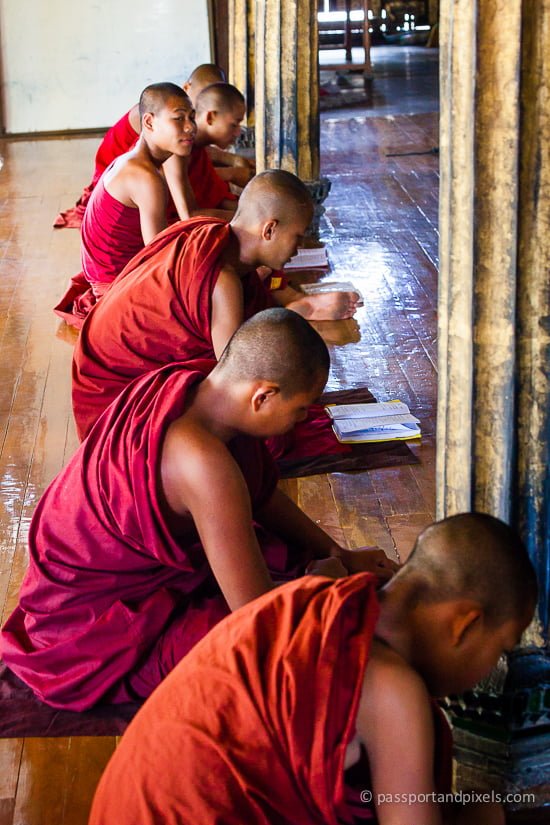 When the boys reach the age of around 20 they have another opportunity to rejoin the monastic community as fully ordained monks.   But this time, they will have to stick to the full list of 227 Precepts!  Most will stay from a few months to a few years, but some remain a monk for life, like this amazing chap below.

At Shwe Yan Pyay monastery outside Mandalay we were privileged to be allowed inside to see the young novices studying.

Interesting to see how this boy is counting on his toes.  I’d love to know what he’s trying to memorise.

This pair aren’t working too hard – but I guess with tourists in your classroom it’d be hard to concentrate!

And of course some of the boys would much rather look out of the window.

As well as the monks in their red robes, many of the monasteries are themselves extremely photogenic.  This is Shwe Inn Bin monastery near Mandalay, constructed from intricately carved teak wood.  If you look closely at the photo you can see the guy perched on the lower roof varnishing it.  That must be quite a job!

And a close up of some of the carvings – I don’t think the guy with the varnish has reached this part yet.

While looking around I spotted this one monk, pacing up and down and reciting quietly to himself. He was completely lost in meditation.  I would have loved to know exactly what he was doing but clearly he couldn’t be interrupted.

As well as the detailed carvings on the outside, there’s some pretty impressive bling inside!

Another monastery I visited is Mahagandayon Monastery on the outskirts of Mandalay, which is one of the largest teaching monasteries in Myanmar, and home to up to 2000 monks at any one time.

Monks are not allowed to eat after 12 noon, so every day at around 11.30 they all queue up to get their last meal of the day. 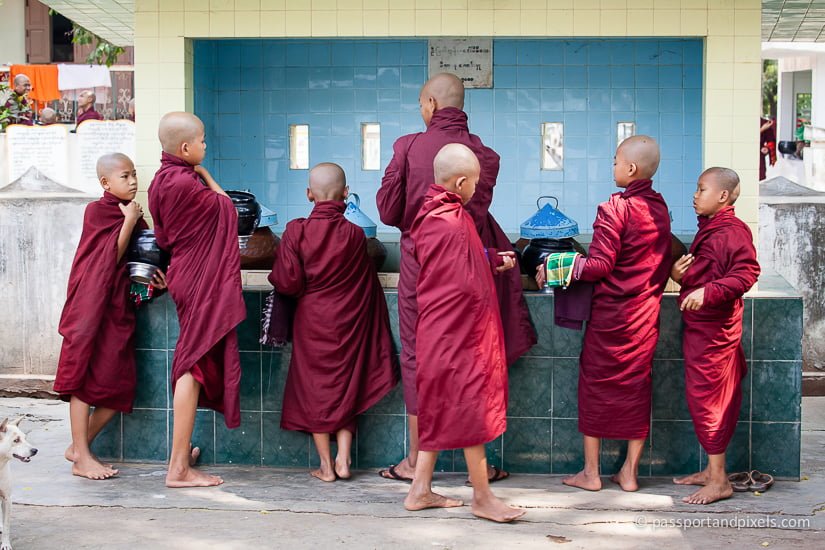 Before the meal they all start gathering to drink water and remove their shoes.

The older boys help the younger ones to get ready.

Then they all queue patiently for their lunch.

For a young novice I imagine the experience must be kind of similar to being packed off to a British boarding school, though here discipline is extremely strict and the novices are noticeably far better-behaved than most British boys! 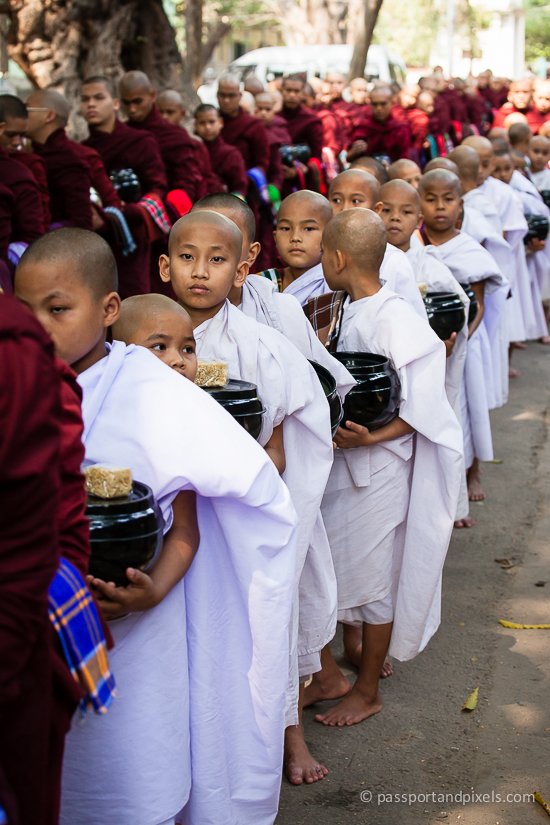 Even so, it looks like this one is getting a ticking-off. I wonder what his misdemeanour was.

This is one of my favourite photos from the monastery: the colours and the light are beautiful and the novice looks so solemn.  I would love to know what he’s thinking about.

Even though tourists are welcome, I did feel a little uncomfortable standing there surrounded by other people all snapping away.   While allowing tourists in can promote cultural understanding and is also a way for the monasteries to raise money, it did feel quite intrusive at times.

I do always try to be respectful, and this is the sort of place where having a big zoom lens can be really helpful.  You can keep a polite distance and still get lovely close up photographs with pretty soft backgrounds.

After the meal, many of the monks were happy to stop and chat.  They’re all keen to find out about Western life and culture and many want to practise their English.

I chatted for a while with this young man who spoke excellent English and wanted to know all about me and my life – while I was of course much more interested in talking about his.

After lunch all the monks returned to their studies.  I just hope someone remembered to feed the cat too!

A Boat Cruise on …

Behind the Scenes on …