This is the sixth part of my day-by-day account of what it was really like to climb the Lemosho Route up Mount Kilimanjaro.  If you missed it, Day Five is here.

I woke well before the morning wake-up call on Day Six to a weird feeling in my face.  I scrabbled through my pile of clothes, toiletries, and other gubbins to find my tiny pocket mirror, and peered into it to find out what was going on.  And what I saw was a trout pout that would have thrilled any cosmetic surgery addict!  It seemed the bright Tanzanian sunshine and lack of UV-filtering atmosphere had been too much for my factor 30 lip balm.  My bottom lip had become terribly sunburnt and blistered, and overnight it had doubled in size.  Not a good look, and certainly one that has entirely put me off getting collagen lip fillers (not that I’ve ever considered it).

Apart from the pocket mirror, something else I was now glad I’d bought with me was a small pot of Sudocrem, most commonly used to ease nappy rash on babies’ bums, but also helpful for all kinds of skin complaints.  And if it’s good enough for babies’ bums, it’s good enough for me!  It’s a thick, white paste, so after I’d smeared it all over my lips I looked like a cross between a reality-show wannabe after one too many treatments, and an Australian cricketer who’s gone a bit too heavy on the zinc.

After another enormous breakfast – and how’s this for a location?! – it was time to hit the trail.  And this time I wasn’t taking any chances with the sun… 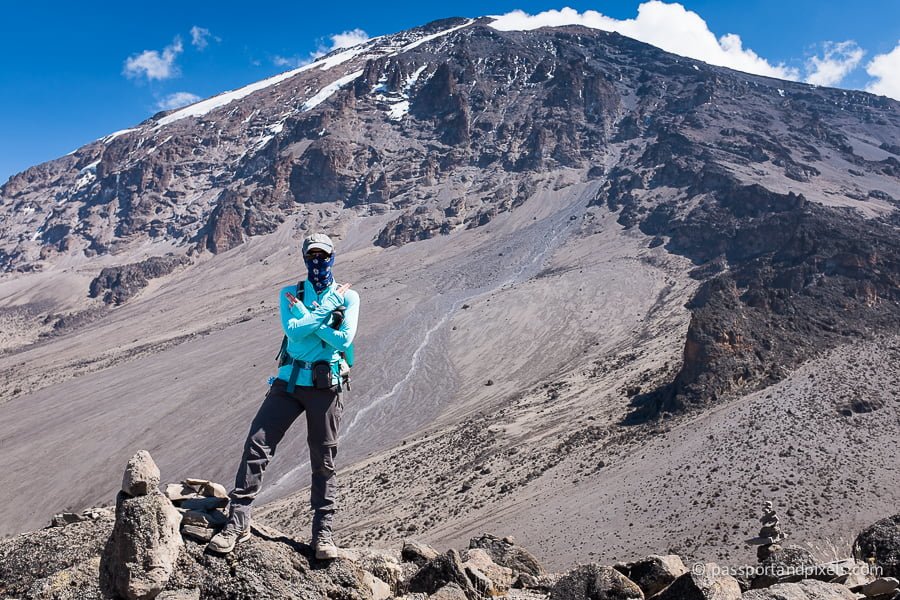 Our challenge for the day was to get from Karanga campsite at just under 4000m, to the base camp, Barafu, at nearly 4700.  Seven hundred metres of vertical ascent, at altitude, when you’ve already been walking for five days straight, is not easy.  But as always, we took it nice and slow, just continually putting foot in front of the other.  Or, as the guides kept reminding us, ‘pole pole’, which is Swahili for ‘slowly slowly’, and is something of a mantra on Kilimanjaro.

Three of our guides, Stratton, Frank and Jonas

I haven’t really talked much about the guides in this day-by-day account.  But suffice to say they were absolutely fantastic.  Equipped with boundless energy and zen-like patience, they were always happy to fulfil every request, and they never seemed to tire, or get fed up.  When I wanted to lag behind and take photographs, someone was always only too willing to wait for me.  They worked round the clock, they had to be constantly ‘on’, and yet they were always smiling.  They even put up with me papping photos of them!

And if you want to see those photos and find out more about them, click here.

The climb to base camp took about four hours, through what they call the Highland Desert or Alpine Desert.  You can see why.  Nothing lives here, nothing grows, and it’s a far cry from the sprawling forests we passed through on Days One and Two! 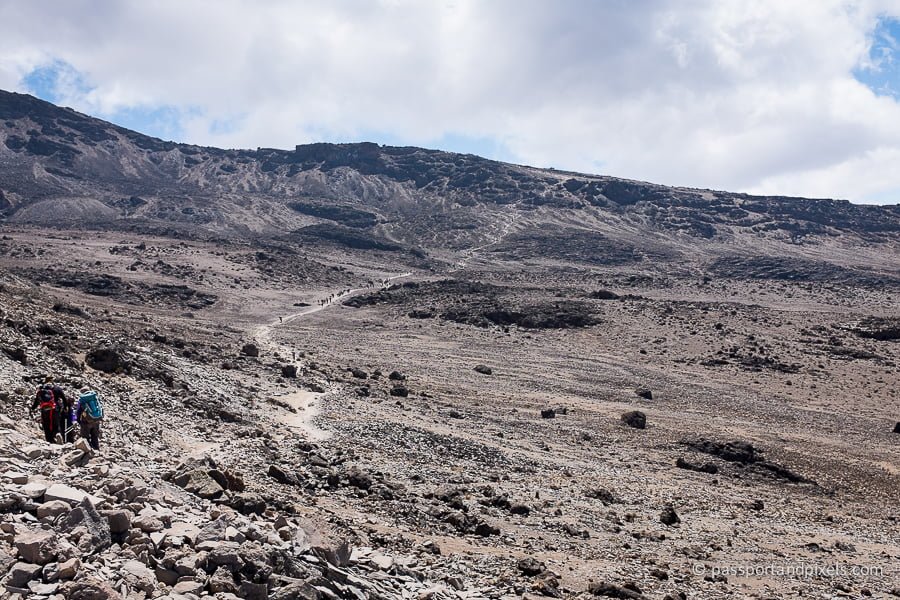 To be honest, I can’t remember all that much about the rest of the walk that day.  I think at that point we were all lost in our own thoughts, grappling with our nerves about the imminent arrival of summit night.  But although I was a bit nervous, I also really just wanted to get there.  I’d planned for 9 months, travelled over 4000 miles, and walked for 6 days: I was as prepared as I’d ever be.  Now I just wanted to get it done and get back to civilisation for a shower!

And physically I was ready.  Acclimatisation had done its thing – and now that we were back at over 4600 m, I wasn’t finding it nearly as hard to breathe as I had a couple of days previously, when we’d had lunch at the Lava Tower.  Back then, I was out of breath just sitting!  But now, after a couple more days at altitude, I was much more comfortable.  That’s not to say that walking uphill was easy.  But it was certainly easier, and it goes to show that these guys really know that they’re doing.  It takes 8 days for a reason.  The acclimatisation thing really does work!

We arrived at base camp in the early afternoon, with time to rest and prepare before starting our assault on the summit at midnight.  Our camping spot was quite low down on the slope, meaning we would have further to climb to reach the summit, compared with other groups camped higher up.  It may only have been 50 or 100 m extra, but it felt like a huge difference!

The afternoon was spent getting ready.  Packing and repacking daypacks.  General faffing.  Debating how many layers was the right number.  How cold would it be at the top?  Pretty cold, apparently – we’d been warned that the drinking tubes on our hydration bladders would probably freeze, and the windchill was unpredictable.  So I packed an extra water bottle, several protein flapjacks for energy, and opted for 6 layers: baselayer, t-shirt, jumper, fleece, lightweight down jacket, Arctic down jacket.

And eventually the sun went down, and summit night was finally upon us…

To find out how we got on, click here to read about Summit Night.

Icelandic Horses And Where …

How to Prepare & Train …