Things To Do In Umbria: Assisi

I recently spent a week exploring and photographing the gorgeous Italian region of Umbria.  Click here for a look at Todi and Orvieto.

Of course no trip to Umbria is complete without a visit to Assisi, the jewel in the region’s crown and a UNESCO World Heritage site.  And you can see why.  Just look at it!

This stunning medieval hillside town is the birth- and death-place of St Francis of Assisi, one of the most well-known and venerated religious figures in history.  Everywhere you go you’ll see St Francis-related stuff for sale: t-shirts, fridge magnets, posters, books.  In Assisi, it’s all about St Francis.

He was a wealthy young man who began life like many of his class: enjoying his privileged status in every way possible. But after a religious epiphany he renounced his previous lifestyle, gave up all his wealth and possessions and became a preacher.

He lived a life of poverty, travelling around and spreading the Christian message, and founded the Franciscan order of friars.  Legends tell of him healing the sick and talking to animals.  He died in Assisi in 1226 and was made a saint just two years later.

Things to do in Assisi: Basilica of St Francis

The absolute must-see on any day trip to Assisi is the Basilica of St Francis.  It’s one of the most important places of Christian pilgrimage in Italy, and unsurprisingly we saw plenty of monks and nuns who had come to worship.

Just like the Buddhist monks I saw on my trip to Myanmar, I thought the nuns in their habits really added to the beauty of the place.  Though it’s always a challenge trying to capture them without causing offence.

The complex has two churches – the Upper and Lower Basilicas.   Both are covered with gorgeous frescoes on the walls and ceiling, mostly depicting the life of St Francis.

You are actually not allowed to take photos inside either of the Basilicas, a rule that I always find intensely frustrating.  Historic sites do it for two reasons: (1) to protect the precious artworks from thousands of flashes going off, and (2) to preserve the dignity of the place and prevent it just becoming a sea of tourists with cameras pressed to their faces.

I do respect their reasons, but I also think it’s OK to take one or two photos, so long as you do it unobtrusively, and don’t use a flash. 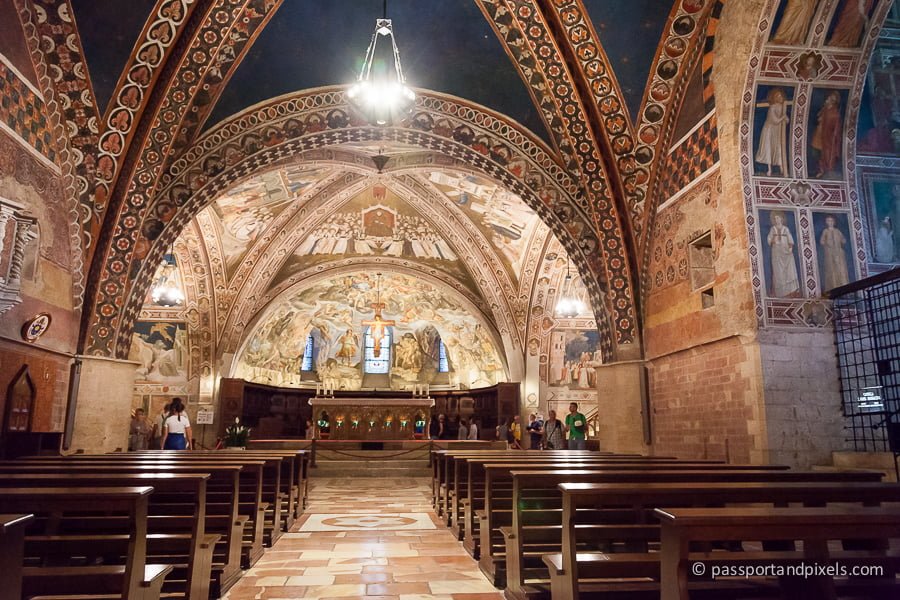 So these are the only photographs I took inside, shooting from the hip to avoid causing offence.  My Canon 5D doesn’t even have a flash, so there are no worries there. 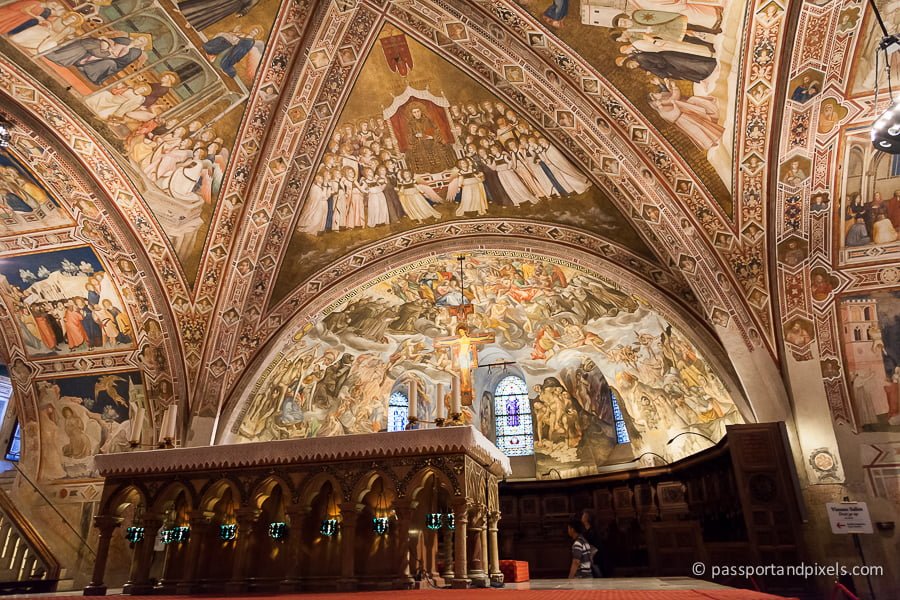 In 1997 Assisi was hit by an earthquake measuring 6 on the Richter scale.  The irreplaceable frescoes were devastated, and many thought they could never be recovered.

But as you can see, art restorers and conservators have done such a fantastic job that you really would have a hard time knowing there had ever been an earthquake at all.  I don’t know if they look different from how they did before, certainly to an amateur like me they looked just perfect.

Inside the Upper Basilica

If you’re making your own St Francis pilgrimage, the other must-see place is the Basilica of Santa Maria degli Angeli (Saint Mary of the Angels), situated just outside the main part of Assisi.

According to legend, it was on the site of this church that St Francis had his religious conversion, deciding to renounce the world and live in poverty.

Since it’s such an important Christian site, of course it’s no surprise that I spotted several more nuns worshipping here.

In St Francis’ time, there was of course no great cathedral on this site.  Instead, there was just a small, simple church, called the Porzunciola.  It was in this lowly place of worship that St Francis received his calling.

After his death in 1226, pilgrims began flocking to the site.  Eventually, the Basilica was built around the original church.  The Porzunciola now stands inside the main building.  It’s been restored and decorated, but it’s still the original structure, which dates back to the 9th century.

After two churches it was time to see something different, so we took a walk through the narrow back streets of the town to the top of the hill on which Assisi sits.

The walk took about 20 minutes, uphill all the way, and in July’s 35 degree heat with very little shade it was pretty challenging.

The streets were absolutely pristine, and with not a brick, or lick of paint out of place.  It was all just a little too perfect – it felt like we were at Disneyland, or on a film set.  We only saw one car, and even that was so in keeping with the surroundings it could have been stage-managed. I wouldn’t have been very surprised if the buildings turned out to be just fronts, held up at the back by scaffolding.

The top of the hill is crowned by the Rocca Maggiore, an imposing fortress that has stood guard over Assisi for over 800 years.

Once you’ve paid your entry fee (just a few euros), you’re free to wander through the network of staircases and rooms, some of which contain mock-ups of scenes of life inside the castle.

Most of these scenes, complete with mannequins in costume, fake food and so on, were typical of this kind of poorly-funded historic visitor attraction, and I didn’t much bother with them (nor, as it turns out, did I bother taking any photographs).

Even so, it’s an excellent castle: a proper castle, complete with turrets, crenellations, an imposing tower, and plenty of nooks and crannies to explore.   If Assisi, like many of Umbria’s hilltowns, has been copied straight from the pages of storybook, then the Rocca Maggiore is definitely home to the wicked King, or the bullying black-hearted Baron.

And even if you’re not much moved by castles, it’s definitely worth the walk for the views alone, looking out over the town across the plain beyond.

Have you been to Umbria? What’s your favourite thing to do in Assisi?  And if not, hopefully you’ve been inspired to go now! 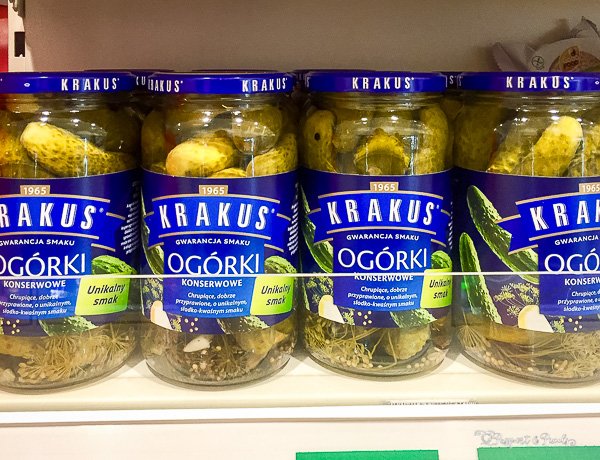 An Unhelpful Guide to… Poland 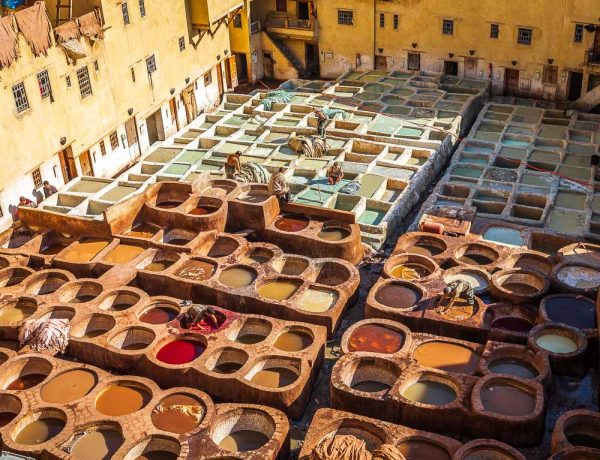