I recently spent a week exploring and photographing the spectacular region of Umbria in Italy.  Part One of my journey is about the beautiful town of Todi.

After spending a few days relaxing and exploring the landscapes of Umbria, the next stop on the tour was the fabulous old town of Orvieto, one of the prettiest towns in Italy. 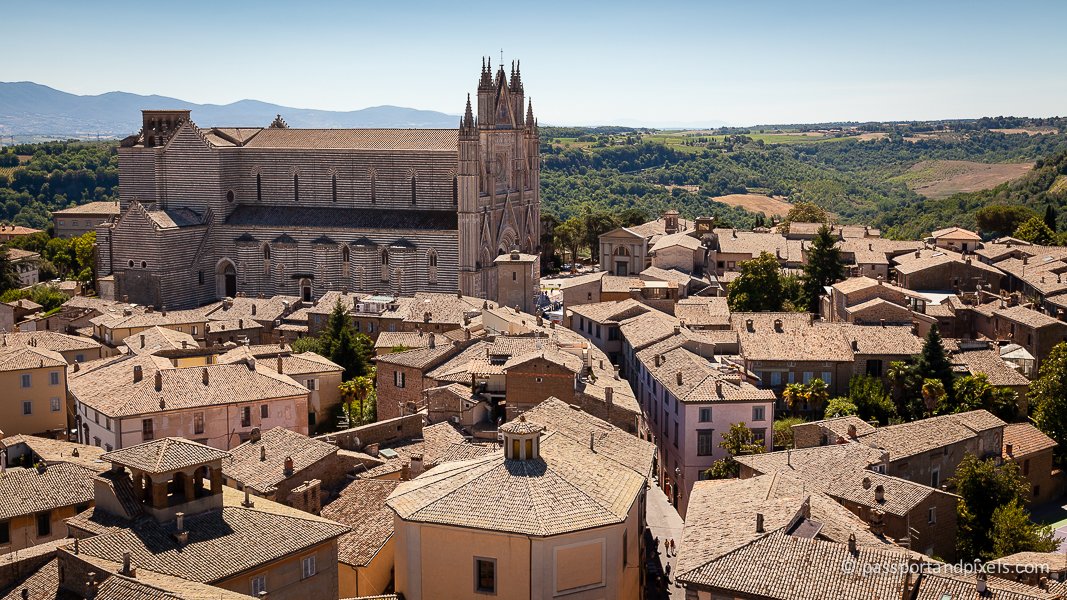 Orvieto as seen from the Torre del Moro

Orvieto is one of Italy’s big-hitters, and definitely not to be missed.

Like many of Umbria’s towns, it was founded well over 2000 years ago, and is perched defensively on a hilltop, giving it impressive 360-degree views over the area.

A great place to start in Orvieto is to climb the 236 steps to the top of the Torre del Moro.  The 47-metre tall tower was built in the late 13th century to keep watch over the district, and today it still affords dramatic views in every direction.  Apart from giving you wonderful panoramic photo opportunities, it’s a good way to find your bearings and get a sense of the layout of Orvieto.

Once we’d taken in the bird’s-eye view, we paid a quick visit to the Piazza della Repubblica to check out the Chiesa di Sant’Andrea, with its distinctive 10-sided bell tower.  I’m a bit of a sucker for a lens flare / starburst shot, and happily the sun was in just the right position in the sky to get this beauty.

Inside the church, I was really intrigued by the window behind the altar.  Unlike most church windows, it’s made not of stained glass, but of translucent alabaster stone.   The stone is obviously less breakable than glass, and helps to keep out the hot Italian sun.  I’d never seen a stone window before, and I thought the design, and the way the stone warms the light as it passes through, made it look less like a window and more like a bonfire.

Then it was on to the main attraction: the much-celebrated Duomo.

‘Nothing can prepare you for the visual feast that is Orvieto’s soul-stirring Gothic cathedral, ‘ says the Lonely Planet guide to Italy.  To me, this sounded like travel-writer’s hyperbole.  You know, that thing where everything is either jaw-dropping, spectacular, or incredible, and then invariably you get there and find yourself underwhelmed.

Carvings on the facade of Orvieto’s Duomo

Anyway, I thought, now I’ve read this, I consider myself prepared. 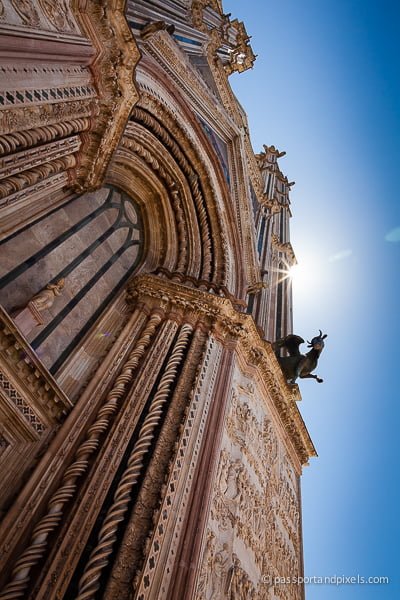 But even with that warning ringing in my ears, it turns out I still wasn’t.  It really is incredible. In fact I’d go so far as to say Orvieto’s Duomo is one of the most amazing buildings in all of Italy. 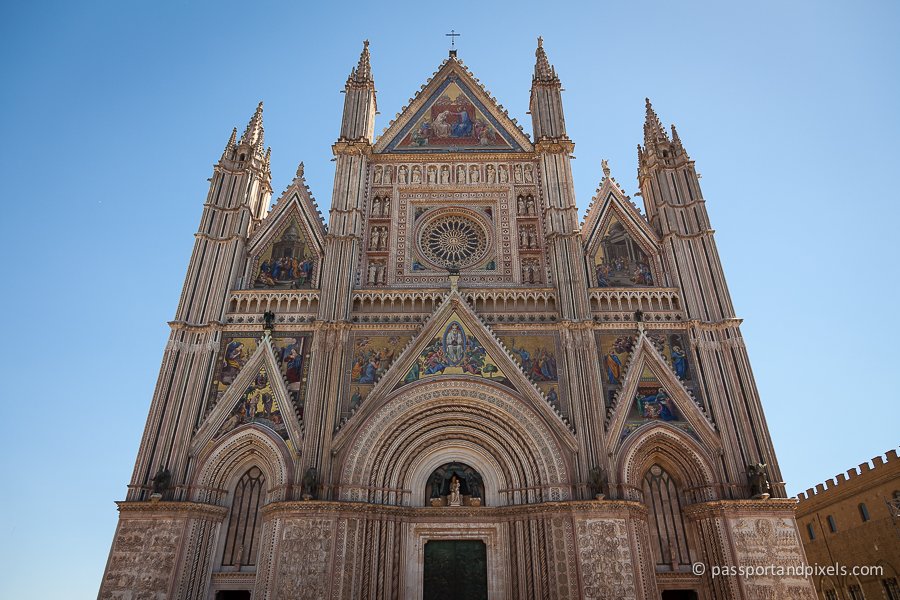 At the front, the insanely detailed facade is jam-packed with bright colours, intricate carvings, and gold leaf, while the sides of the building are, amusingly, stripy like a mint humbug!

It’s a bit eye-bending, but the contrasting colours and lines make for striking photos. (couldn’t resist another starburst). 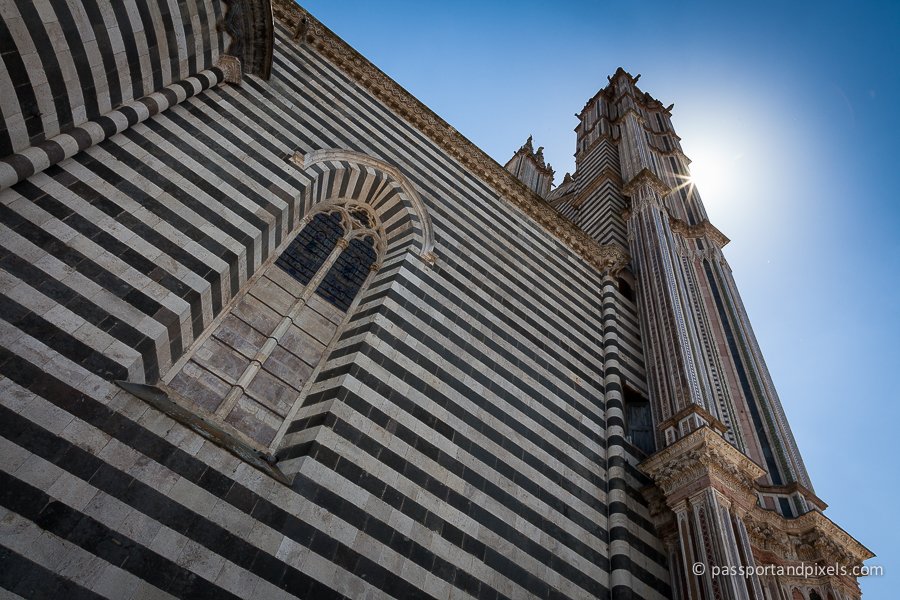 Inside the stripes continue along the main nave, which is a huge, uncluttered, completely empty space – there aren’t even any pews as you’d normally find in most churches.

It makes the place feel huge and grand, though it lacks something of the spirituality you find in many places of worship.  I’m not religious, but I still find that plenty of churches have, you know, a sort of ‘presence’, which Orvieto’s Duomo lacks.

That doesn’t make it any less impressive or beautiful, of course. 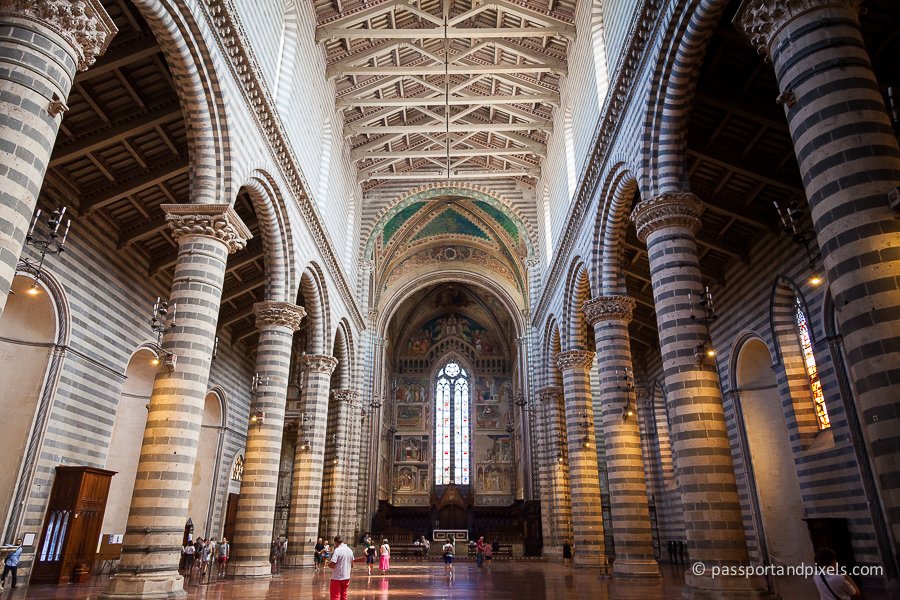 Just as in the Chiesa di Sant’Andrea, many of the windows are glazed not with glass, but with very thin slices of alabaster stone.   Here they’ve used stone for the lower portion and glass for the top half.   The glass lets the light in and the stone keeps out the worst of the fierce summer heat.

Again, I love the way the sun shining through the stone makes it look as though the windows are on fire. 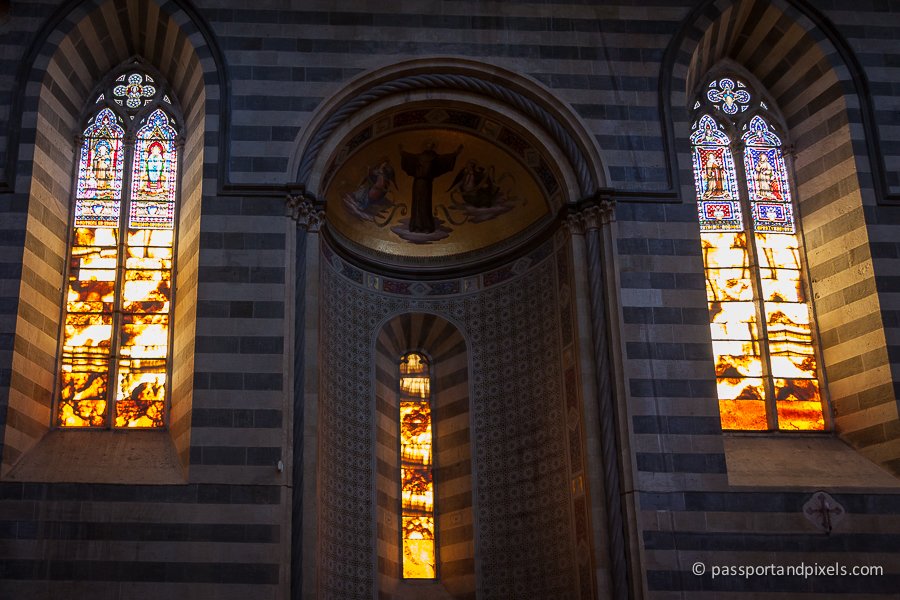 But inside, the main draw is not really the stripes, or the windows.  Here it’s all about the frescoes. 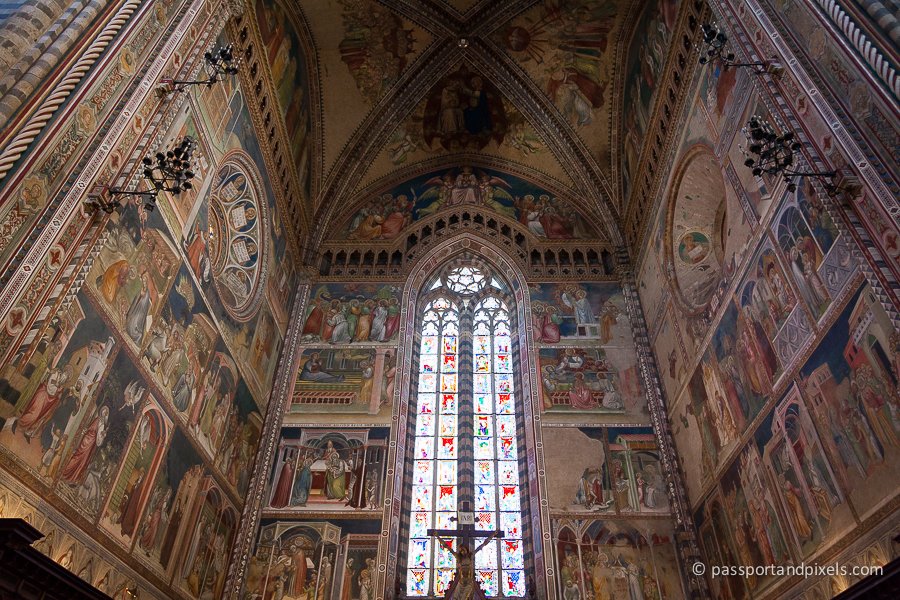 Behind the altar, and in the side chapels, every inch of the ceiling is covered in glorious art.  The most astounding of all is this magnificent work by Luca Signorelli depicting the Last Judgement.

It was started in 1499 and took four years to complete.  Some say it was this that inspired Michelangelo’s work on the Sistine Chapel in Rome.

Some of the imagery is faintly disturbing, like the scene above showing the dead being brought back to life.  It’s incredibly detailed, though I’m impressed at how buff all these guys are after probably thousands of years buried underground!

This image is also rather terrifying, seeming to show winged demons zapping the damned with fiery lightning bolts.

I couldn’t stop staring at it.  The closer you look, the more incredible details you notice.  Pretty soon I had a painful crick in the back of my neck from looking up so much!

Behind the altar, there are scenes from the life of the Virgin Mary, painted in the 14th century by a local artist called Ugolino di Prete Ilario.  I love the way they’re laid out like a medieval comic strip.  It kind of makes me want to write speech bubbles in.  I wonder what they should say…? 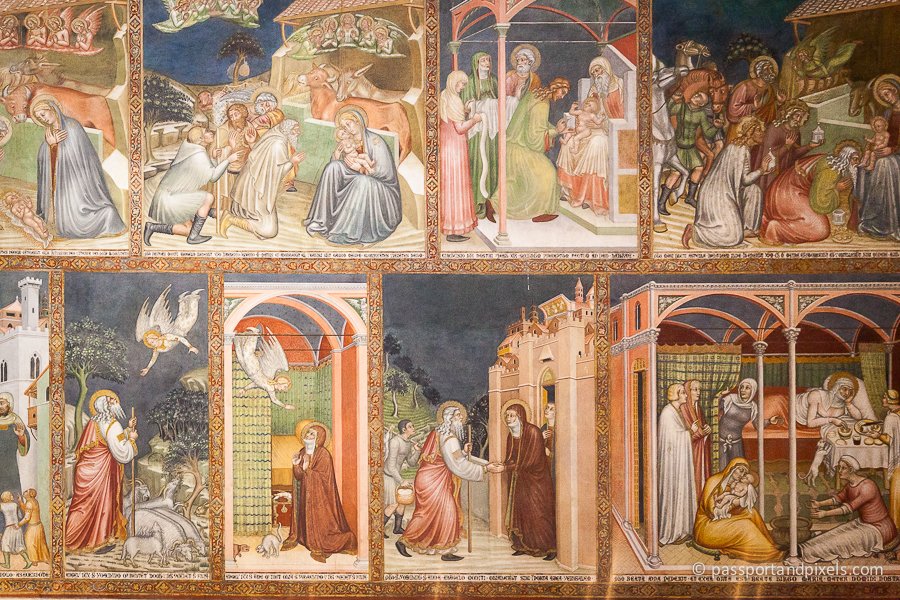 Our trip continued to Assisi.  Click here to carry on reading. 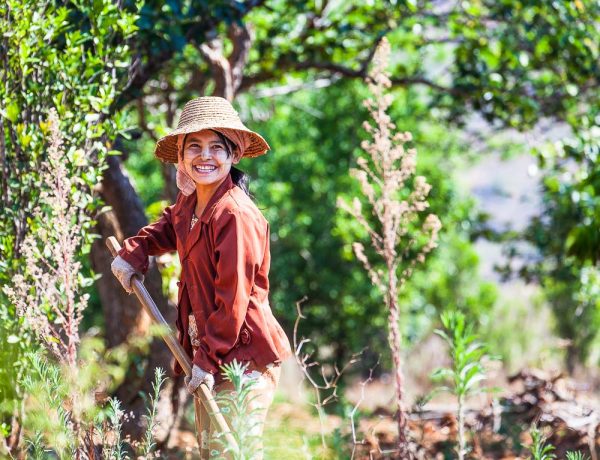 An Unhelpful Guide to… Herculaneum

Things To Do In Umbria: Assisi