When I agreed to come out to Uganda to work as a volunteer for Child’s i Foundation, I had very little idea what to expect. The decision was made rather on the spur of the moment.  It was early December, and one minute I had no plans for January, the next, I was booked on a flight and wondering what jabs I needed to get.

I didn’t have any time to do research into the country I was about to make my home for the next four months. All I knew was that Uganda was probably fairly similar to Tanzania, which I visited (and loved) in 2016, and that everyone I knew who had spent time here said it was a fantastic place. Reassuring, maybe, but not terribly informative.

But now I’ve been here a few days, so while I’m still far from being an expert here’s what I’ve discovered so far.

Obviously the very first thing you notice when you arrive in Africa is the blindingly bright sunshine.  After fourteen hours in calmly-lit, air-conditioned planes, the fierceness of the African climate is like a slap in the face.  But hardly unexpected!  What was unexpected, however, was Entebbe airport: although typically small and tired-looking, the entire process of disembarking, passing through the health check (where a nurse wants to see your Yellow Fever certificate), passport and visa control, and baggage reclaim were surprisingly pain-free.

In front of the airport the crowd of waiting friends and drivers were held back by a row of barriers, and although there were several offers of ‘taxi?’, it was nowhere near as alarming as arriving in Thailand or Cambodia, where you can quickly become engulfed in a swarm of willing ‘helpers’ trying to take your bag and lead you to a car.  I quickly found Max, my driver – young, friendly, reassuring, welcoming – he loaded my case into his vehicle and then proceeded to sing along to power ballads for the entire 60-minute journey to Kampala.  His rendition of Phil Collins’ Take A Look At Me Now was quite something, and I’m only sorry I didn’t record it.

I did, however, record just a tiny part of the journey, so you can see what my first glimpse of Uganda looked like:

Eventually we pulled into a side road and stopped in front of some forbidding-looking black gates, set into a wall topped with razor wire.

This was not the place I had been expecting after I Google StreetViewed the pinned location I’d been sent by my contact. But it turns out she’d put the pin one street along, and it’s easy to see how mistakes can happen here.  Addresses barely seem to exist: my road doesn’t even have a street name, and I have no idea what the number 4 represents.  Now when I direct drivers to drop me off, I have to tell them ‘it’s near the Makindye Country Club, off Lukuli Road, just down from the Uganda Electoral Commission. That gets them to vaguely the right area at least… 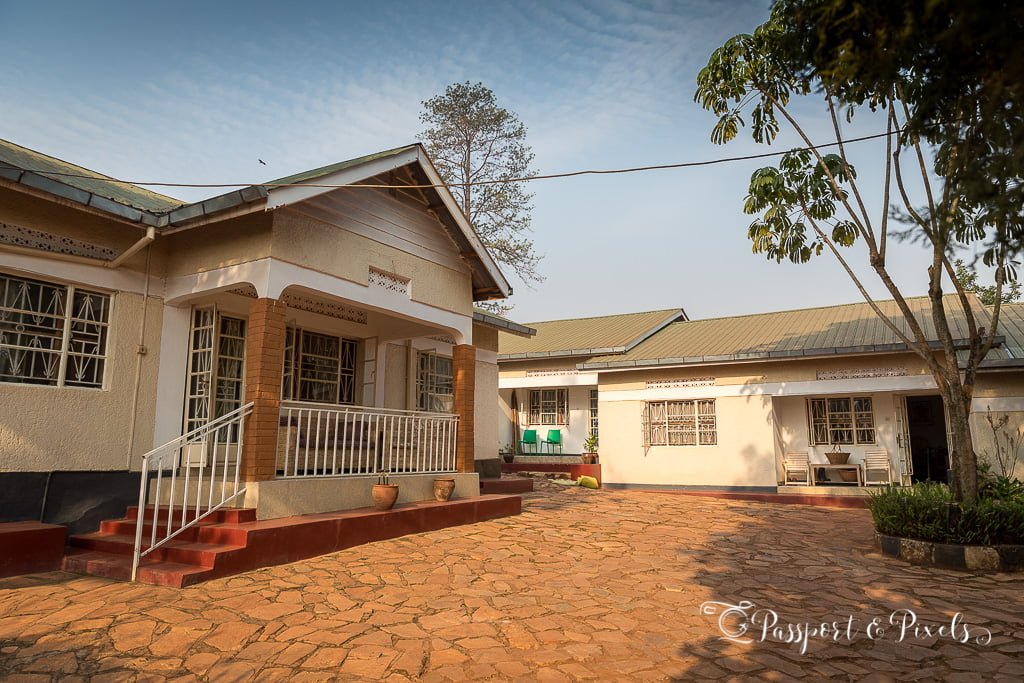 My house is the one on the left

Inside that reassuringly secure wall is a compound with 4 houses: far from being on my own as I anticipated, I have neighbours! All expats: two couples in their 30s, and one very elderly lady who has been living here for 50 years, and all, so far, very friendly and welcoming. 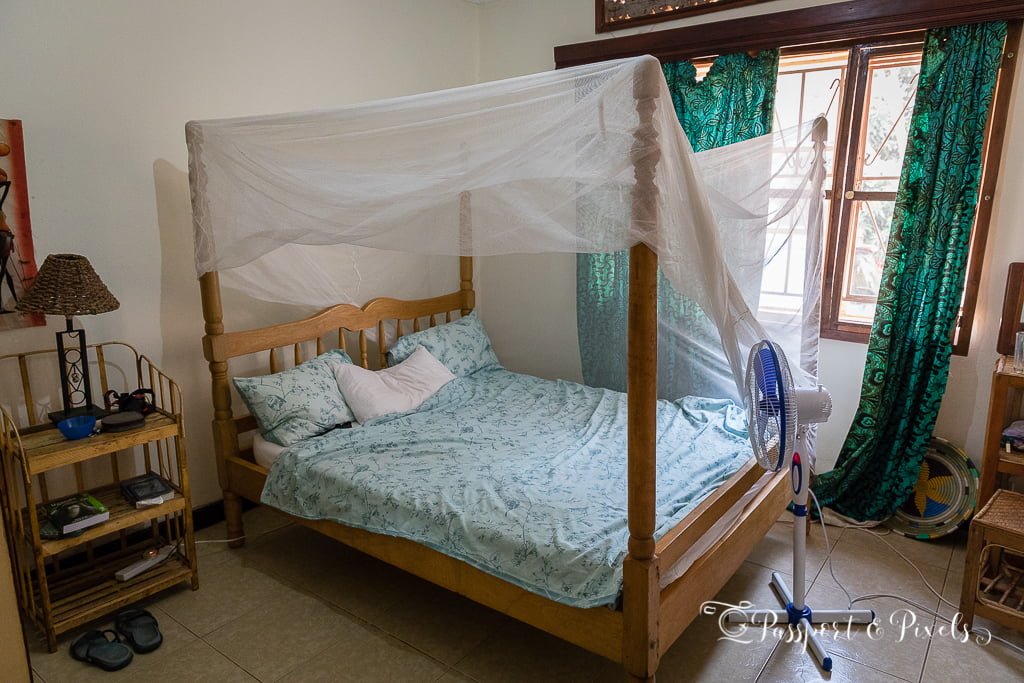 Inside it’s fairly basic but clean and has everything I need: a bedroom with a pretty comfy bed complete with mosquito net (which I always find rather romantic), a living/dining room, a bathroom with a typical African shower (either a cold deluge or a scalding trickle), and a perfectly serviceable kitchen. There are two other bedrooms for the other volunteers who will be coming and going during my stay, and there will even be a lady to whom I can pay 20,000 Ugandan Shillings (UGX) per visit (about £4.20) to clean and do my laundry. It’s practically luxurious!

There is just one vital thing missing: wifi. Like most people I’m now completely addicted to the internet (how I managed without it for 7 months in Ghana in 2002 I will never know!) so sorting that out was my absolute first priority. I’ve heard Kampala is a great city to be a digital nomad, but you can’t be one of those without internet access!

A couple of other things are also going to take some figuring out: the electricity is on a prepayment system, so I will need to find out how and where to top up credit.  Similarly, gas for the cooker is in a canister, and drinking water comes from a giant water cooler that takes 18 litre bottles; I have no idea where to buy these from or how I will get them home when I find them.

The house is situated to the south of Kampala, about a 20-minute drive from the office, and a similar distance from any supermarkets, cafes, or shops.  What this means, is that the first thing I was going to need to do is figure out how to get around.

Kampala has no public transport system as you or I would recognise it: there’s no easy-to-navigate Metro system, no trams, and no neatly-numbered bus routes.  Instead, there are matatus, boda bodas, and Uber.

Matatus are minibuses.  They follow designated routes but they’re unlabelled, so there’s no way of knowing where one is going unless you ask the driver, and even then if you’re new, like me, chances are you won’t understand the answer, or know where to get off.

Matatus en route to who knows where

Far easier – if you’re willing to take the risk – is a boda boda, or motorcycle taxi.  Their track record for accidents is pretty terrifying, but unless you want to spend half your day sitting in the heat and fumes of the appalling Kampala traffic, they are really the only way to travel.

I was taught how to use these by the guy who let me into the house.  He showed me where to find my nearest ‘boda stage’: an unmarked dirt area by the side of the road populated by a handful of guys straddling clapped-out looking mopeds.  When they see you coming, they’ll immediately offer you a ride, and then it’s down to you to negotiate the price.  My fare to the office, a journey of 20 minutes, costs UGX5000 (about £1). 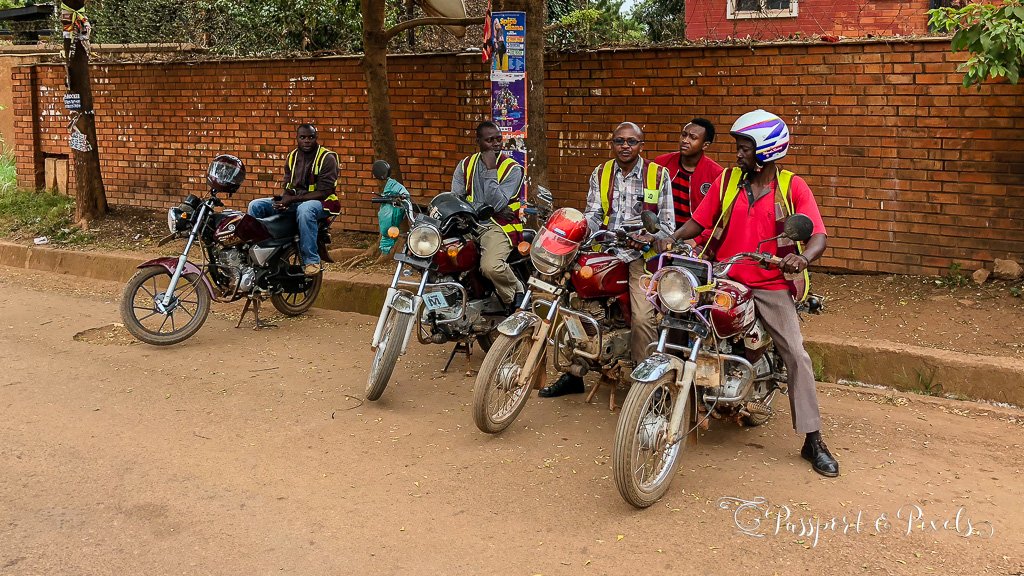 Boda drivers waiting for a fare

My first ever trip, however, was a much shorter journey up to nearest grocery store to buy supplies.  I clambered on somewhat ungracefully, and off we went, bouncing over speed bumps, skirting round potholes, and skimming past rusty flatbed trucks spewing out fumes, while I clung on as tight as I could. 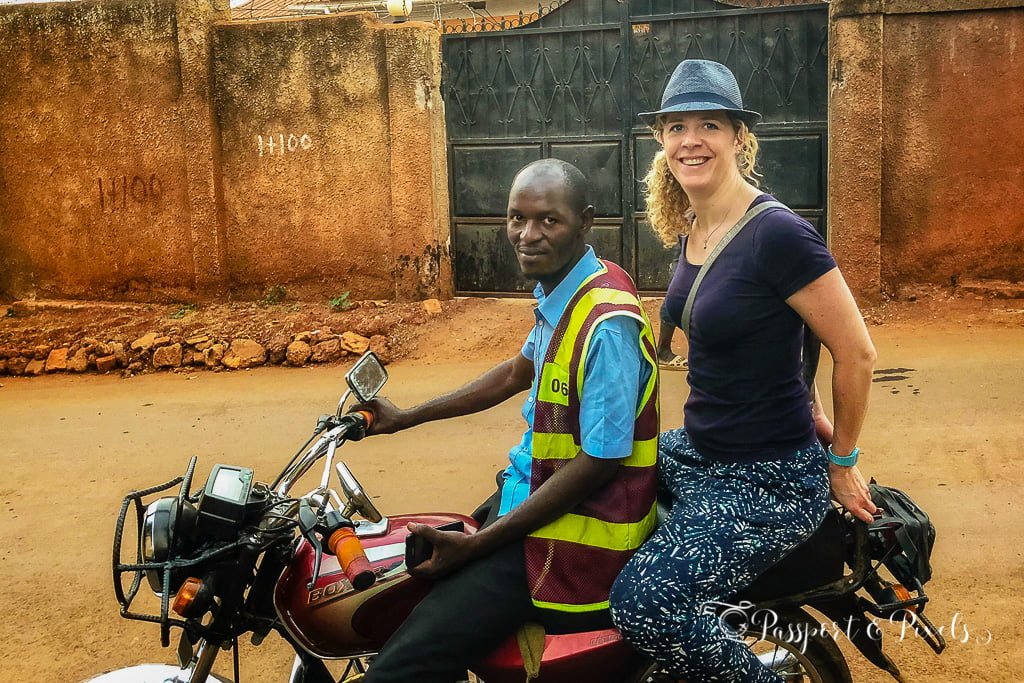 I’m only smiling because I’m relieved the journey is over!

Of course, if you’re going to take such risks, it’s a very sensible idea to wear a helmet.  Fortunately Child’s i has now supplied me with one, so if the worst does happen, at least I’ve got some protection!

Picking up an unknown guy by the side of the road and hopping onto the back of his bike is also not without its own dangers, so the charity also supplied me with my own personal boda driver, called Brian.  He doesn’t speak much English, but he seems to be a reliable sort of chap.  Here he is as he drove me to work on my second day.  He’s clearly confident enough in his driving to think he doesn’t need a helmet, which is reassuring…

Still, riding on the back of a boda boda in the Kampala traffic is not for the faint-hearted. And just three days in, I’ve already had first-hand experience of the bodas’ poor safety record.  My driver (not Brian) was turning right, when another driver tried to overtake us as we turned.  The two bikes clipped each other, and we went over.  Fortunately we were travelling so slowly at the time that no one was hurt: just some damage to the bikes and a rather bruised and dirty leg! 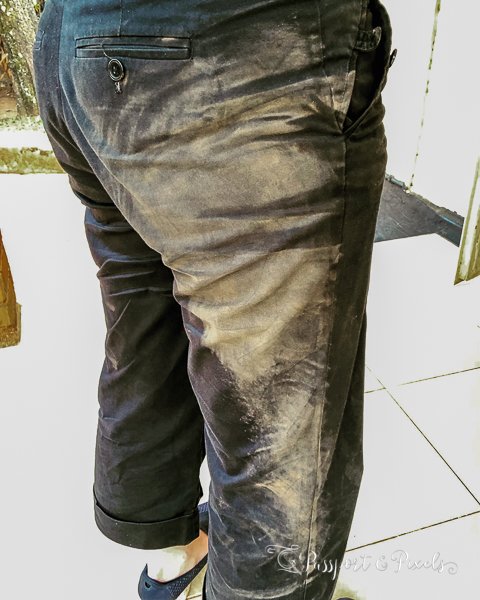 Dirty but not hurt

In spite of this hair-raising experience I’m going to continue to use bodas – I don’t really have a choice.  But I’ll definitely make sure I always wear my helmet!

Getting Online In Kampala

So now I was able to get around the city, I could do the next thing on the list: sort out wifi. It might sound like a #firstworldproblem, but I simply can’t be a blogger, and keep in touch with friends and family back home (not to mention following all the goings-on on Twitter and Instagram!) without a decent internet connection.

My workstation: where the blogging magic happens!

I’d been told I could buy something called a ‘mifi’ – a portable, personal wifi router that I could carry round in my bag, and which would provide me with a hotspot everywhere I went.  Sounds amazing, and frankly given all the London dead spots I could use one back home too!

First, though, I needed cash.  Uganda is an almost entirely cash economy; almost nowhere takes credit cards. So I found a cashpoint, and to save repeated visits I withdrew the maximum amount possible: 2 million shillings! For the first and probably the only time in my life I am an actual millionaire (even though in reality it’s only £420) – though walking round with a thick wodge of cash like that in my bag did make me rather nervous.

I was however, finally able to buy what has immediately become my favourite thing in Uganda: my mifi router.  It’s costing me £36 a month, but I don’t care. I love it!

So now I’m set up and ready to get stuck into Uganda life, and I’m curious to see what the next few months will bring. I’ll continue to bring you updates of how I get along, and I hope you’ll stay with me.

And if you have any top tips for places to go and things to do, not just in Kampala but elsewhere in Uganda, please comment below! 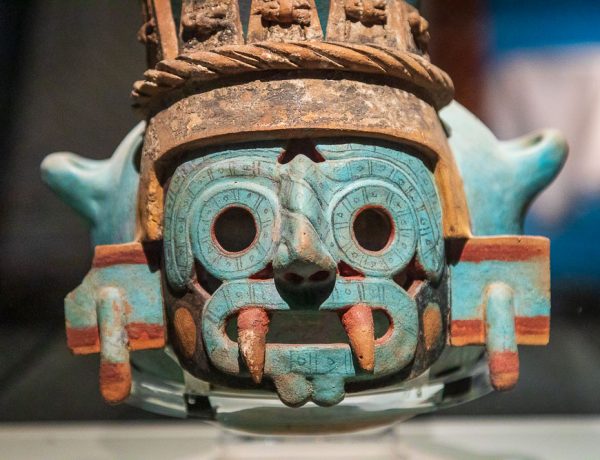 An Unhelpful Guide To… Aztec Ruins In Mexico 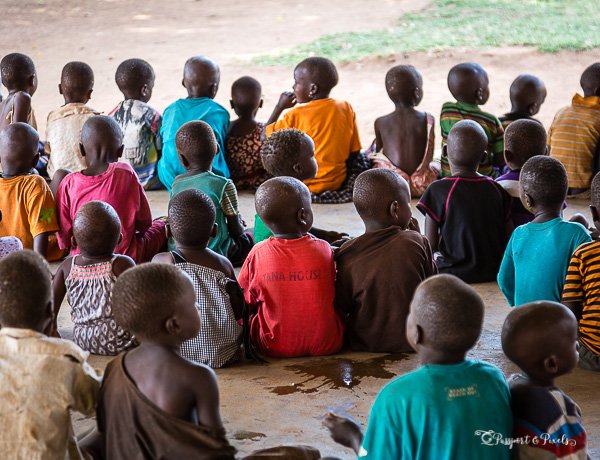 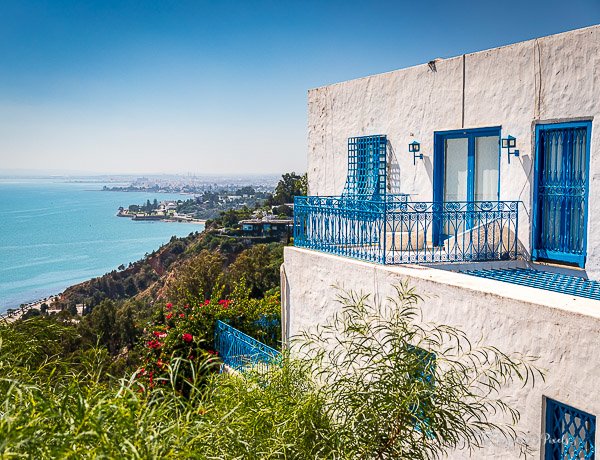 A Night on The Sleeper Train In India