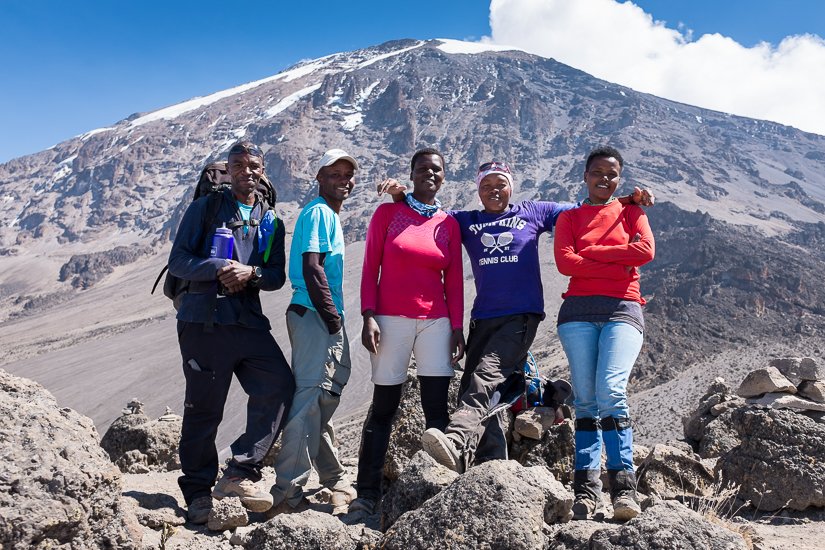 No one survives even a day on Kilimanjaro, let alone making it to the top, without a frankly embarrassing amount of support from an enormous team of guides and porters.  It’s their job to carry your stuff, cook your meals, supply you with safe drinking water, put up your tent, take it down again, listen to your gripes, spur you on when things get tough… and on it goes.

It would be all too easy to take them for granted, but they work phenomenally hard, and never show the slightest sign of weariness, impatience or irritation.  Which is why I wanted to give just a few of them the recognition they very much deserve.

So here are just some of the fantastic Kilimanjaro guides and porters who spurred our group on to success on Kilimanjaro.

Read more: How To Climb Kilimanjaro In 10 Steps

John, our lead guide, is 39, and from the Kilimanjaro region. He’s divorced with two kids who live with him, but they go to boarding school which is why he’s able to spend so much time on the mountain.  It’s John’s job to organise the entire expedition and manage and look after not only the climbers but also the team of 60-odd Kilimanjaro porters and guides.

This included making sure everyone was well and happy (a couple of the crew got sick and had to be sent home); organising who did what job on which day; sending people ahead to reserve camping spots; keeping an eye on the supply of food and water; and dealing with any problems.

Every day he buoyed and motivated our group with a never-ending supply of positive energy and good humour, cheering everyone along with his cheeky banter and, on many an occasion, his tuneful singing voice, as demonstrated in the short video below…

Lucia, 31, is one of just a small handful of female guides on the mountain.  She’s been a Kilimanjaro guide for four years and before that she worked as a porter, lugging equipment up and down and working as hard as any man.  Lucia says she was able to do that because all African girls get used to carrying heavy loads on their heads from a young age.

Lucia is a single mum to two girls, Given (13) and Rena (10), and she wants to set a good example to them and inspire them to work hard so they too can be independent.  Lucia said she’d like to be a role model to other Tanzanian women, proving that they can have equality with men and that working on Kilimanjaro is not just a job for the boys.  I think she definitely succeeded!

Abraham, 39, became a Kilimanjaro porter when his family ran out of money for his education.  He wanted to carry on studying, but with 10 brothers and sisters to educate there simply wasn’t enough to go round. He spent four years as a porter before his English had improved enough to enable him to become a guide, a role he’s now been doing for five years.

Abraham says it’s a really tough job but the money is good.  He’s married to Happy and has two sons and two daughters aged 8 to 17.  Abraham says his favourite part of the job is when everyone makes it to the top, and he likes how every group is different and he always gets to meet interesting people from all over the world.

If anything’s going to inspire you to get to the top of Kilimanjaro, it’s Jonas’s sparking smile!  Jonas is 38, married with four children, and has worked on the mountain for 7 years.  Before starting as a porter he was an operator in a timber factory, driving a machine that cuts cedar and pine logs into planks.  He comes from the Kilimanjaro region (as do most of the team), from a town called Tarakaa.

Jonas says he likes his job, but if he won the lottery he would quit, move to the capital Dar-es-Salaam, and start a business supplying wholesale goods to supermarkets and grocery stores.  In reality, he thinks he’ll do five more years on Kilimanjaro, and then become a tour guide doing trips around Tanzania, which would be much less energetic!

At 44, Frank was the oldest of our guides.  He’s half-Kenyan, half-Tanzanian, and used to work in Kenya as a carpenter, furniture-maker and upholsterer, mainly building sofas.  On his return to Tanzania he got a job as a Kilimanjaro porter, worked his way up to guide and has been in the job for 10 years.

Frank thinks being a porter is easier than being a carpenter, because although carrying a heavy load up the mountain is tough, it’s only for a few hours each day, while being a carpenter is also physically full-on, but all day long. 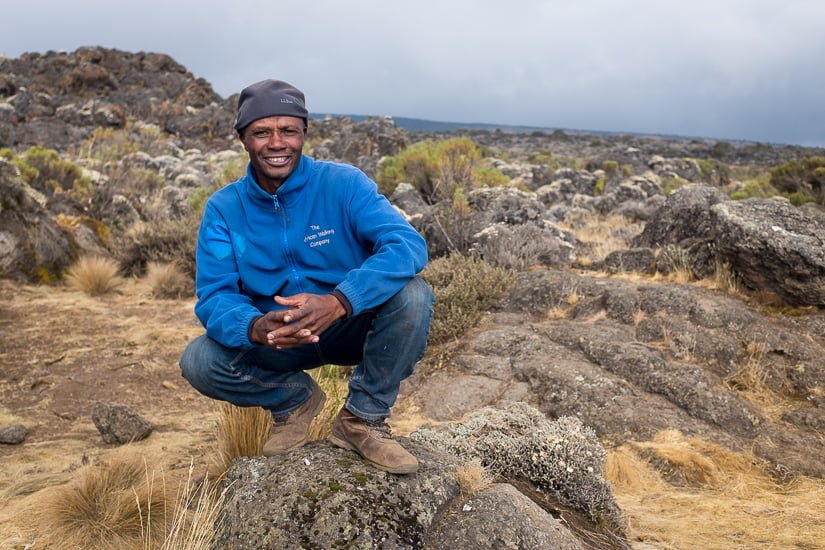 Stratton, 43, has worked on Kilimanjaro for 15 years and has lost count of the number of times he’s been to the summit.  Before joining the Kili family he used to work as a small-scale arable farmer, but he found that prices in the markets were too low for him to be able to make ends meet.  So he gave up and signed on as a porter instead, working his way up to guide after six years.

Stratton says his favourite part of the job is meeting new people and learning from them, so that he can pass on his new-found knowledge to his three sons, aged 18, 14 and 9. 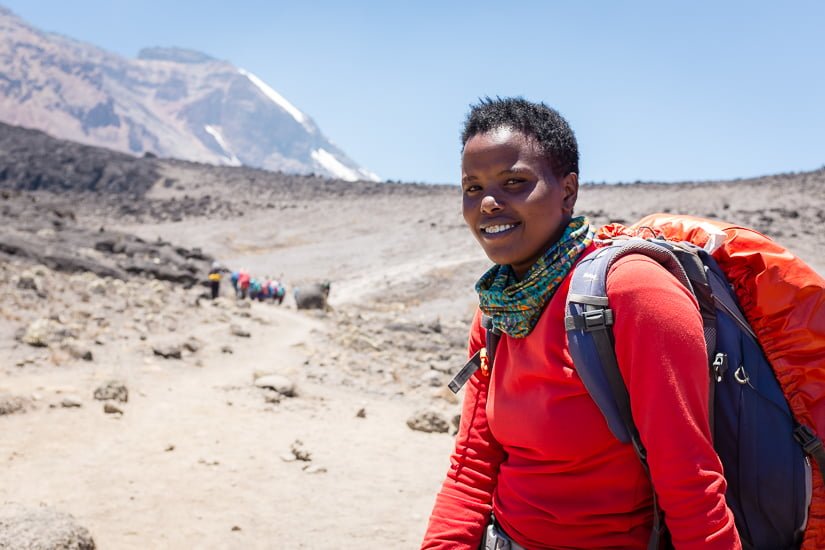 Angela is the youngest Kilimanjaro guide at just 23, and a single mum to two-year-old Jackson.  Angela became a guide four years ago because she wanted to be independent and provide for her family.  She was a porter for just 6 months before moving up to the coveted role of guide.  Her favourite day on the mountain is summit day, and her favourite colour is purple.

The Kilimanjaro Porters and Support Team

As well as the Kilimanjaro guides, a small army of porters and assorted helpers worked tirelessly behind the scenes to keep the army marching.  Here are just a few of them…

Rama (aka. Spiderman) – Porter and Cook

Spiderman has been a cook on Kilimanjaro for nine years.  Every day, he works minor miracles with a few key ingredients and a camping stove, rustling up soups and stews, pasta, rice and chips, porridge, fry-ups, salads, and even birthday cakes when called for.

He’s responsible for feeding not just the clients but the entire crew!  His English isn’t great, but he told me that his nickname is Spiderman because spiders are wise, and so is he.

The ever-cheerful Florian, 31, is Spiderman’s right hand man, helping prepare the food and serving it up to the hungry group.  Florian is from Arusha, is married with a son, and has been a kitchen porter for one year.

Johnson, 21, is the lovely porter who had the unenviable task of carrying my kit bag every day so I didn’t have to. What a star! Johnson doesn’t speak much English, but I learned he’s doing the porter job to earn enough money to go to college to train to be a truck driver (apparently it pays well and isn’t as hard as being a porter). I gave him a decent tip to help him on his way.

Veronica was one of only two female Kilimanjaro porters in the team.  She was assigned to carry someone else’s bag, and she didn’t speak any English, so I didn’t get to find out much about her.  But I took her photograph because I was so impressed with her strength and determination, carrying far more up the mountain than I ever could.

A guide looks out at the view on Kilimanjaro

What a fantastic crew!  There is absolutely no doubt that they work harder than anyone, and being with them made the whole Kilimanjaro experience hugely enjoyable in spite of the effort and (sometimes) pain.  Whatever they’re being paid, it isn’t nearly enough!

And here’s how I trained and prepared: Preparing and Training for Kilimanjaro – Part 1

Note: I climbed Kilimanjaro with Exodus Travels and the African Walking Company. I paid in full for the trip. All opinions are my own. I don’t accept freebies in exchange for positive reviews. 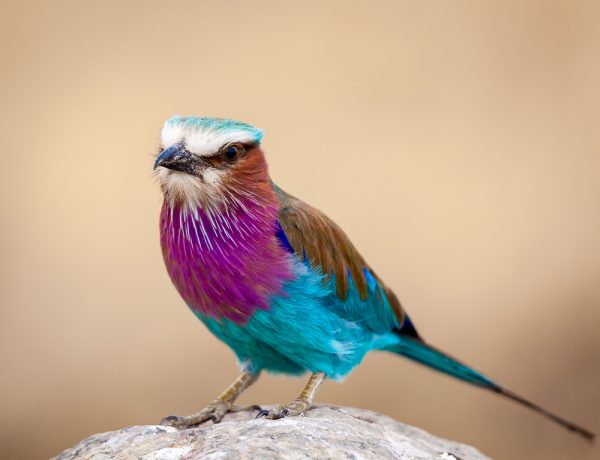