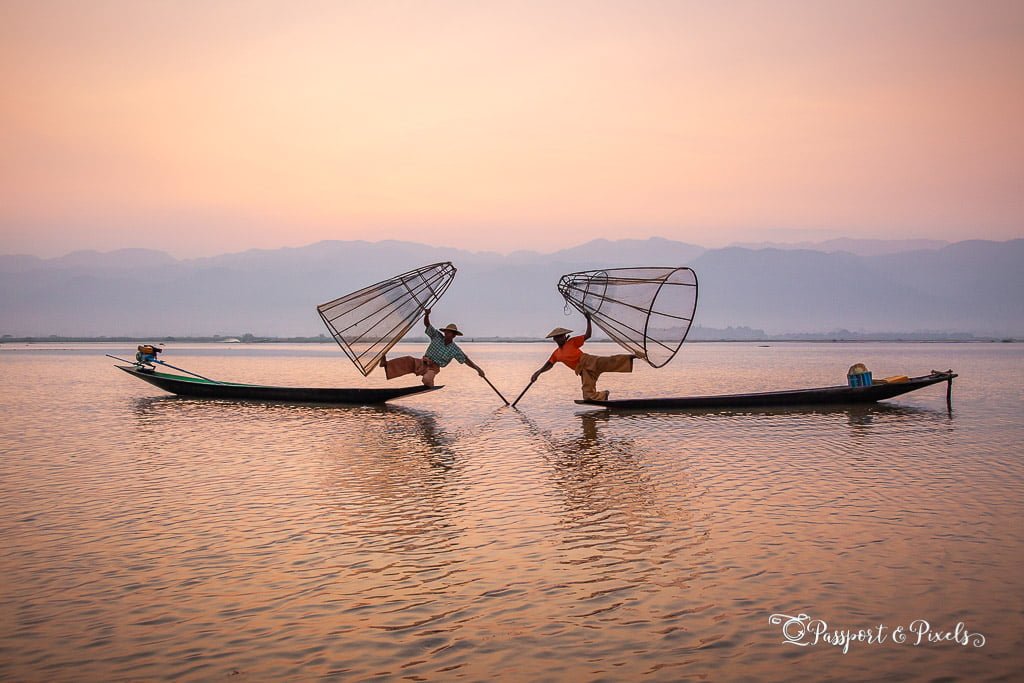 If you’ve seen photos of Myanmar, or been there, chances are you’ll recognise these guys. They’re the famous leg-rowing fishermen of Inle Lake, and they’re probably one of the most iconic representations of Myanmar and its people there is. And if you’re planning a trip to Myanmar, well, I’d hazard a guess that seeing these guys is pretty near the top of your list – and if it isn’t already, it should be!

But if you’re going to travel all that way to see these guys, you should probably know a little more about them, right? Well make yourself comfortable; you’ve come to the right place. Here’s everything you need to know about the iconic leg-rowing fishermen of Inle Lake, Myanmar.

The fishermen use their leg to control the oar, keeping their hands free to work the net

Where is Inle Lake and why is it special?

Inle Lake is located in central Myanmar, about a six-hour drive from Mandalay. At 22 miles long it’s the country’s second largest lake and – fun fact, fact fans! – it’s home to nine species of fish that are found nowhere else in the world. Now these two things on their own would not normally be enough to make this place one of the country’s biggest attractions; what is, is the fact that it’s a stunningly pretty place, bursting with the sort of unspoiled, traditional charm it’s getting increasingly hard to find in today’s over-touristed world.  And yes, there will be tourists there, but luckily the lake is plenty big enough to get away from them. Phew! 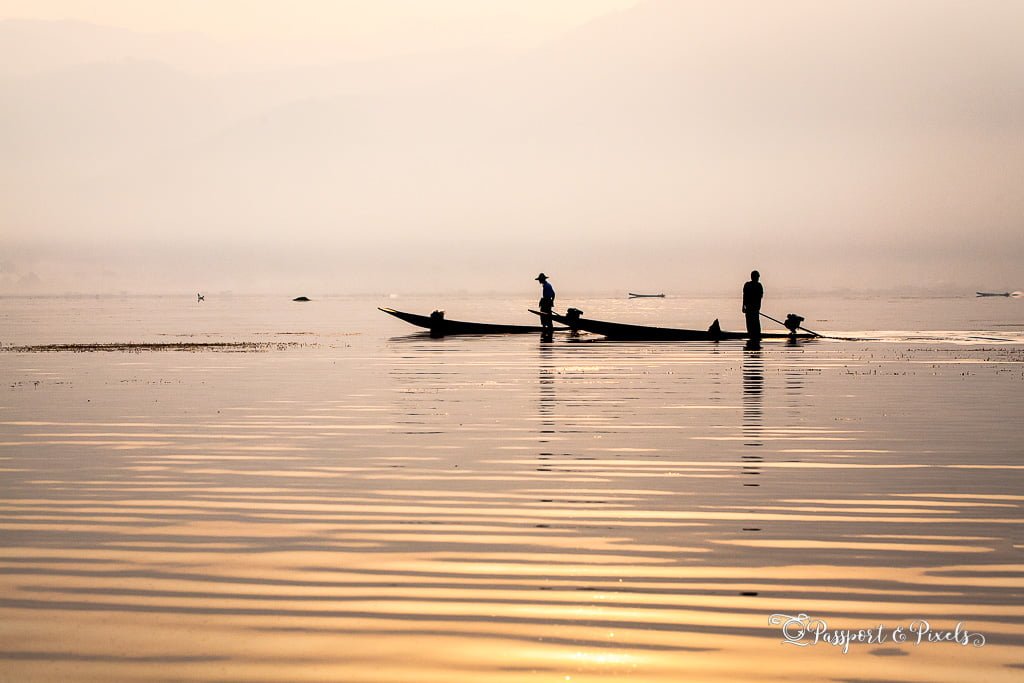 Who are the leg-rowing fishermen of Inle Lake?

The fishermen belong to the Intha people, who are the main tribe that lives around Inle Lake. The Intha (which translates to ‘lake people’ in Burmese) are a traditional tribe who live a subsistence lifestyle on and around the lake: fishing, farming, and sometimes crafting souvenirs to sell to tourists.   They live in the huts on stilts that you’ll see all around the shores of the lake, and farm the ‘floating gardens’, vegetable beds made from woven reeds and pegged to the lakebed with stakes.

This fisherman is wearing a traditional longyi, or sarong 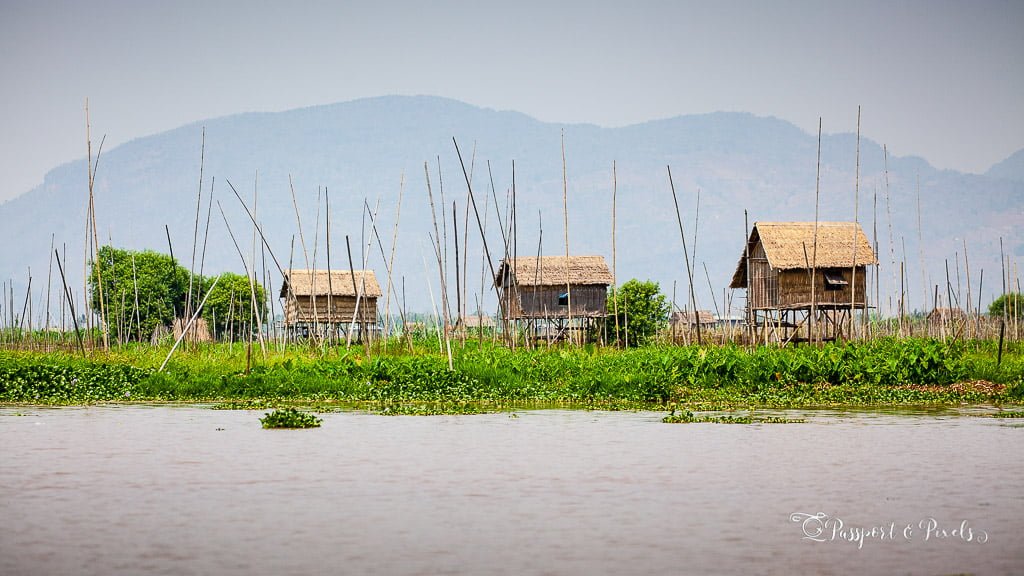 Why do they row with their feet?

The technique is a tradition that’s believed to date back to the 12th century and has been handed down through the generations. Leg-rowing fishermen start learning as teenagers and some keep going well into their 70s and beyond.  It’s said that standing up in the boat enables the fishermen to see the fish more clearly, as well as being able to avoid any weeds or other debris that might get tangled in the boat or the net. But it’s only men who use this technique; if women row they do it the traditional way, with two hands, sitting down.

The trick is to use one leg to move the oar, so the boat glides slowly forward.  The fisherman then uses his two free hands to pull the net in and remove any small fish that may have got caught. It may look easy (it doesn’t), but it definitely requires superhuman levels of balance, strength and agility. I’m pretty sure if I tried it it wouldn’t be long before I was getting an unscheduled swim.

As you can see from the photo below, this eye-catching technique has another advantage: it certainly tones up the muscles!  Perhaps we should all be learning how to leg-row to get buns of steel… 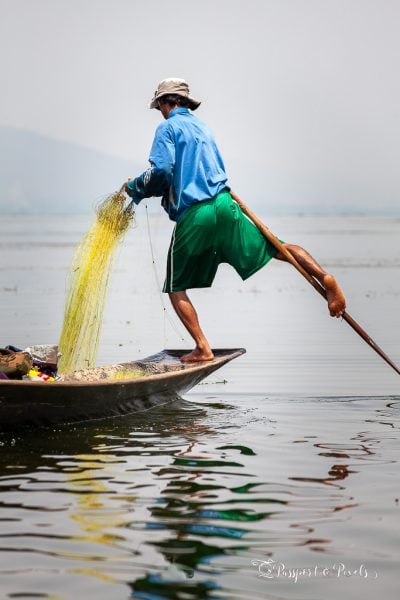 A fisherman shows off his incredible strength and balance 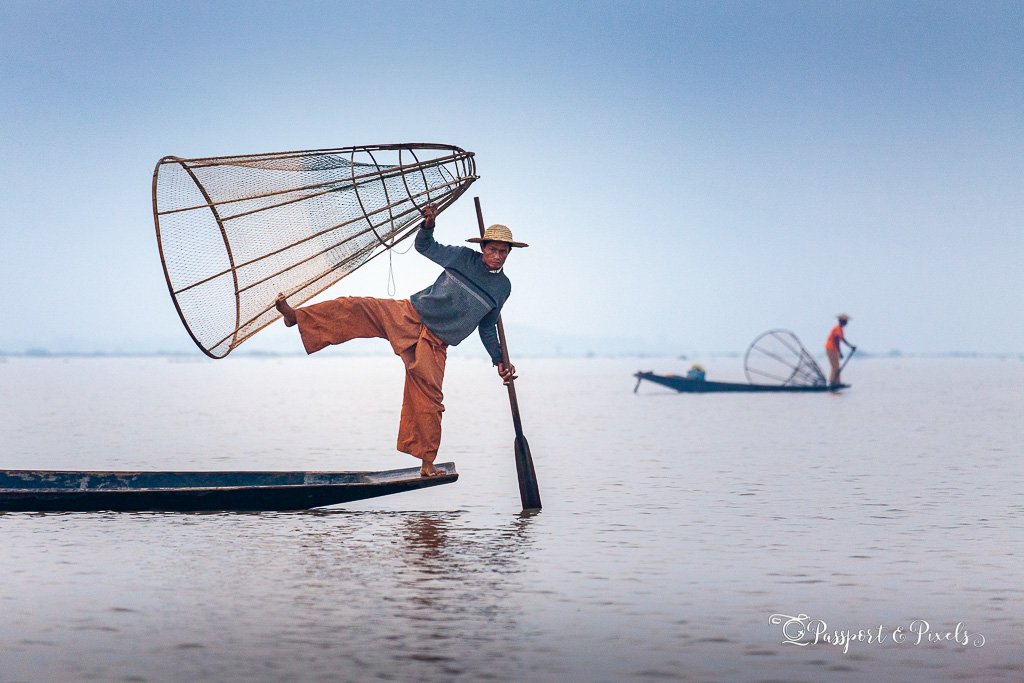 You have to concentrate hard so you don’t fall in

How do they actually catch fish?

The conical bamboo frames you see in the photo below are supports for the net. The fisherman puts the frame in the water with the net stretched over it.  The lake is shallow and he’s able to push the frame into the weeds and mud at the bottom, trapping any fish inside. He then releases the net to capture the fish, and pulls it back in – both hands helpfully free thanks to the leg-rowing technique.

How to see the leg-rowing fishermen of Inle Lake

Obviously the only way to see the fishermen is by boat. There are plenty of operators offering boat tours of the lake for a few hours or the entire day; ask in your hotel or simply go down to the docks and haggle. When I went in 2015 a boat and driver cost $25 for the day.

Most boat tours will take you to a few other places on the lake, including Phaung Daw Oo pagoda with its five golden images of the Buddha, and various artisanal workshops where they make crafts including hand-woven silk, cheroots, or pottery. If this floats your boat (pardon the pun), then go for it, but if, like me, you just want to see the fishermen, make sure you’re clear about what you’re after. The boat drivers will be keen to take you to the workshops because they get a commission on any purchases you might make. 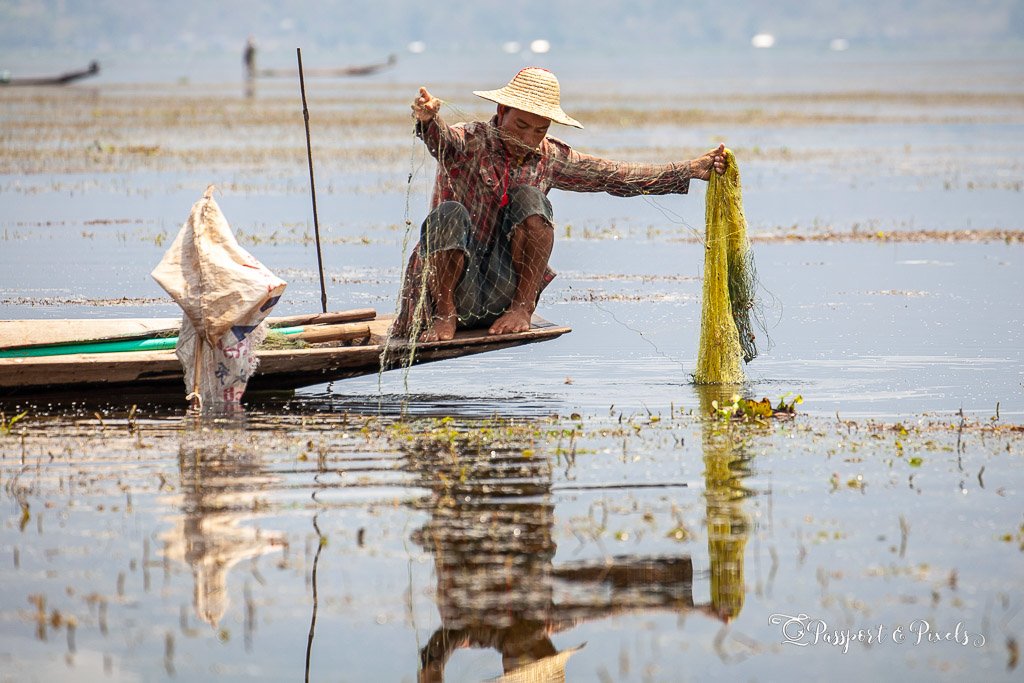 We did a boat tour on our first day on Inle Lake, and to be completely honest, it wasn’t the best. We did see some fishermen but only in passing, and we seemed to spend far longer than I would have like being taken to places where they clearly wanted to sell us stuff. It was a long and hot day, and it wasn’t what I was after at all.

So the next morning I persuaded three girls from my tour group to chip in to rent a boat and go back on the lake. This time we started before dawn, long before the tourists boats arrived, when the lake was calm and flat, the light was doing that amazing thing that only pre-dawn light can, and the fishermen were going about their business. 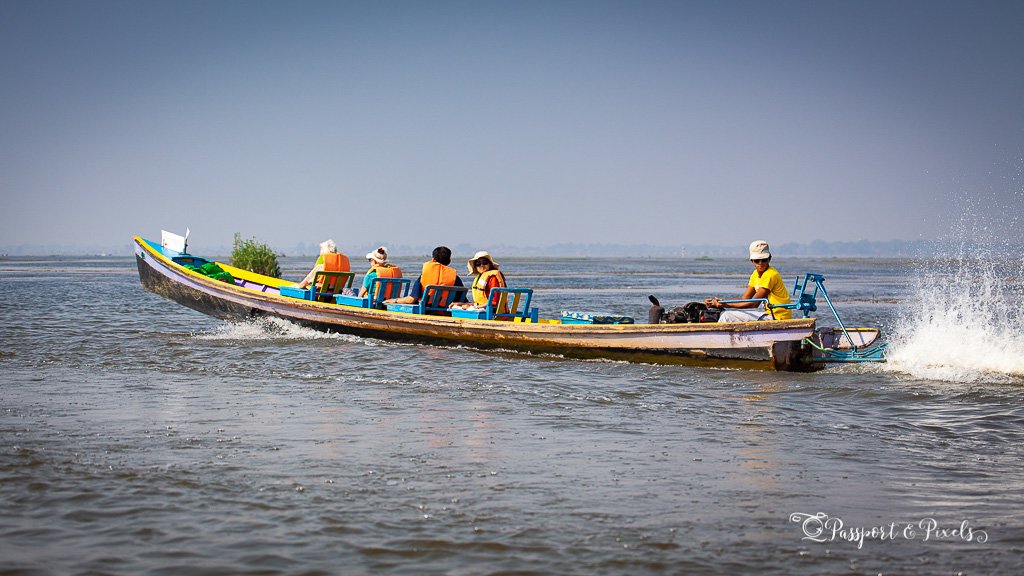 A boat ride on Inle Lake

And as we sped out onto the lake, there they were. Yes, a few of them posed for us, clearly after a tip, but further on we found plenty more, real genuine fishermen, living their traditional way of life. They paid us no attention as we stopped to watch them, and I was able to take all the photos I wanted. 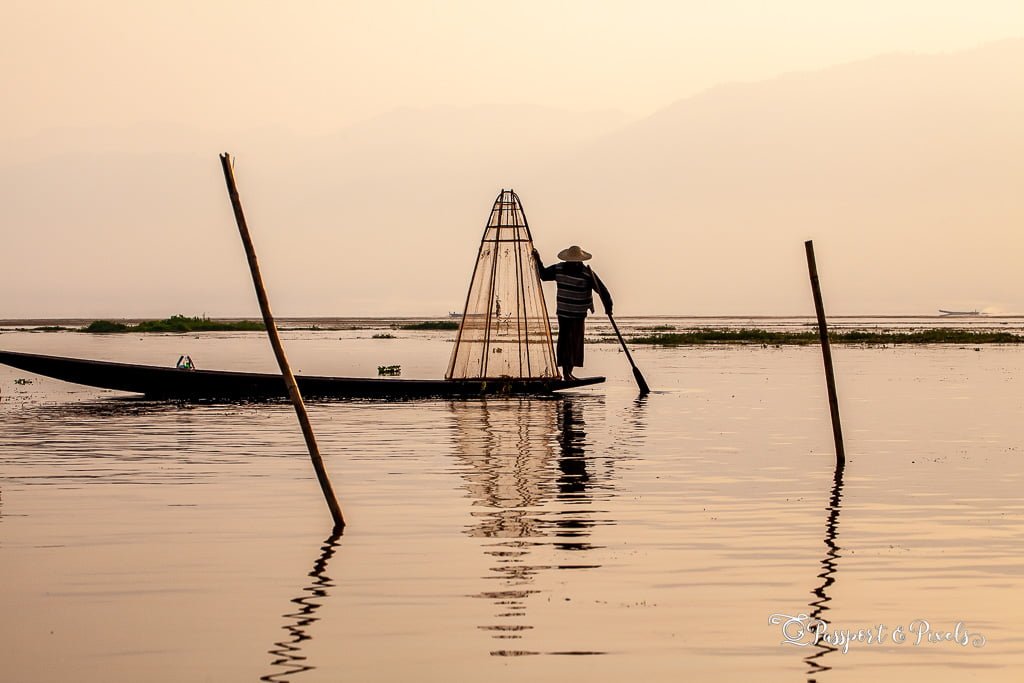 A fisherman with his net in the pre-dawn light

But isn’t this just a show put on for tourists?

Short answer: yes and no. There are certainly some fishermen who seem to make more of a living performing an artistic fishing ballet for tourists, and fair play to them. Many of the boat tours will make a beeline for these guys, and they do look beautiful. If you want the picture postcard photo, stick around and tip them for their efforts. I certainly did and I don’t regret it.

But then, if you want to see authentic fishermen, keep moving. There are plenty around. The leg-rowing technique is real, not just a tourist show, and if you ask your driver to take you to another part of the lake, you’re bound to see them. Especially if you go nice and early, as we did, when they’re actually busy fishing, the lake is glassy smooth, and the light is perfect. 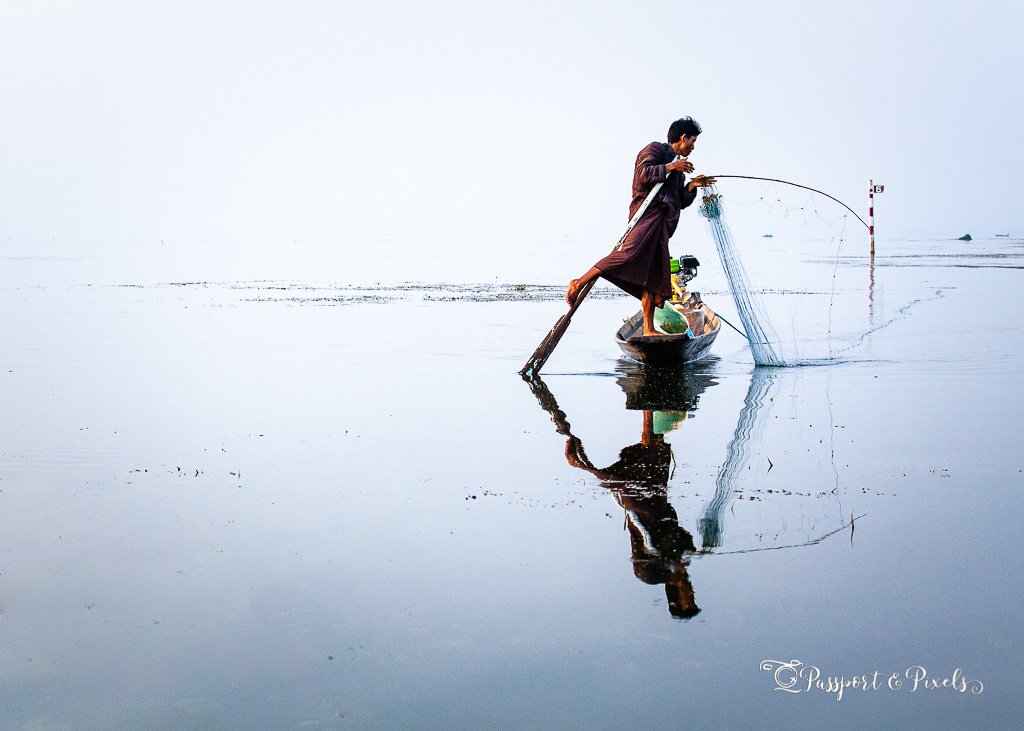 Inle Lake was by far my favourite place in Myanmar.  I love this photo, taken just before dawn.  I think it looks like a painting. 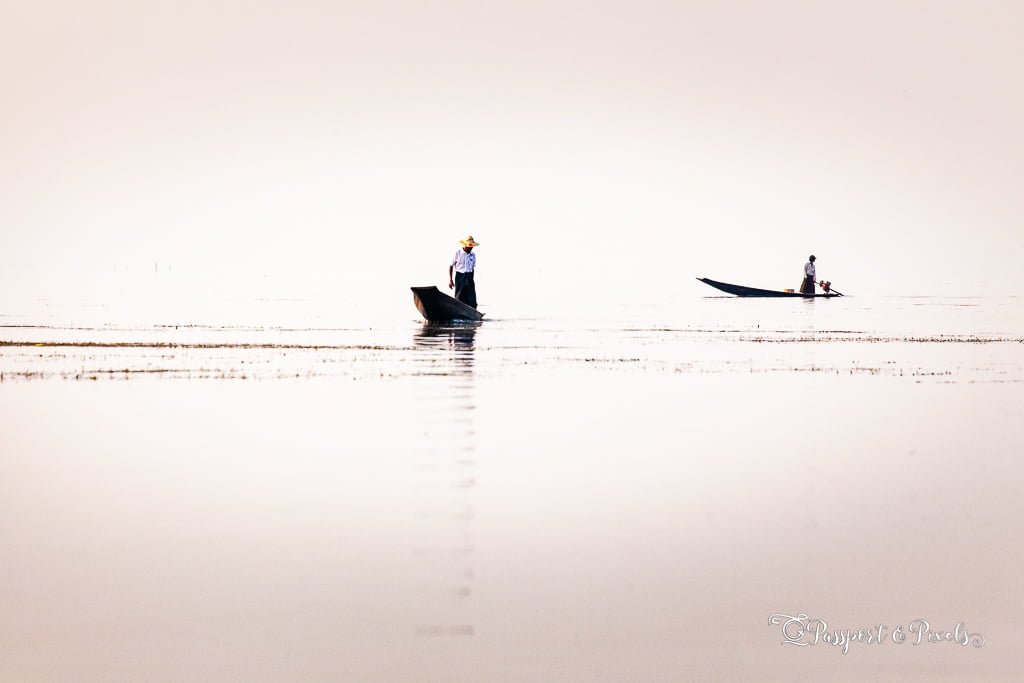 Looking for most posts on Myanmar? Why not try the following?

If you liked this post please support my blog and Pin It!