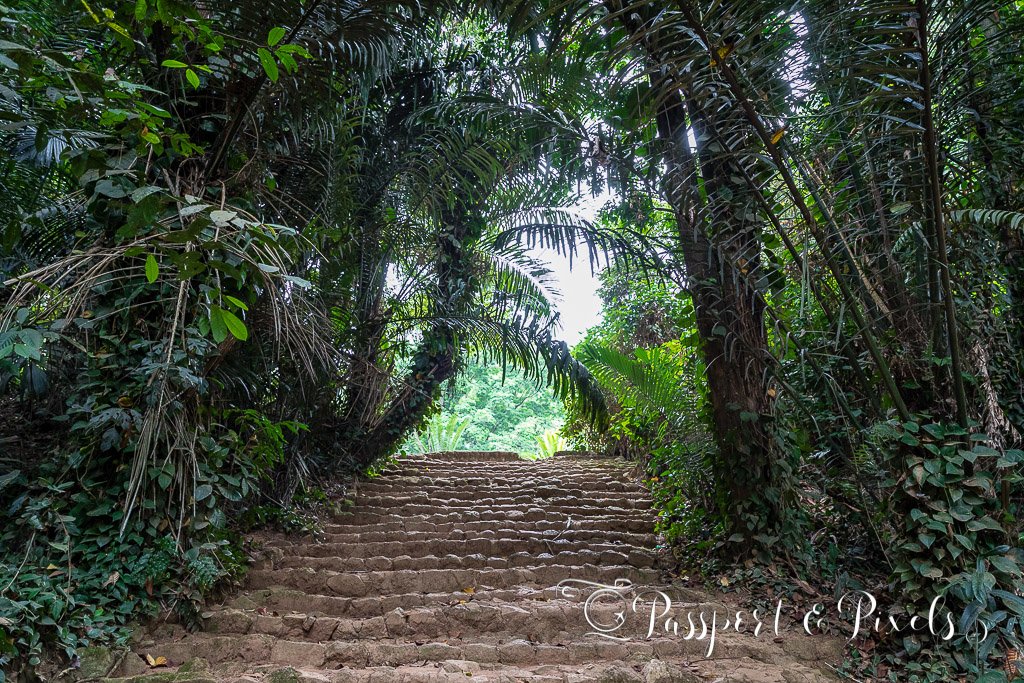 Inside the Botanical Gardens, Entebbe. Scroll down to find out more.

When you arrive in Uganda, the chances are that unless you come overland, you’ll enter the country via Entebbe International Airport, about an hour south of Kampala on the shores of Lake Victoria.

At this point, most people hop in a car or a bus and are immediately whisked away to the capital city without a backwards glance. But this is a mistake.  Far from being just another dirty airport hub, Entebbe itself is a relaxed, friendly, and astonishingly lush tropical town, with plenty to see and do, and it’s definitely worth taking the time to visit. So I thought I’d share my suggestions of things to do in Entebbe.

I’m currently based in Kampala, but am determined to see as much of the country as possible while I’m here.  And with Entebbe just an hour’s drive away, it’s easy enough to leave work early on a Friday to avoid as much of the traffic as possible and head down to the lake for a relaxing weekend away from the heat and noise of the capital.

So, with a friend for company, that’s exactly what I did. 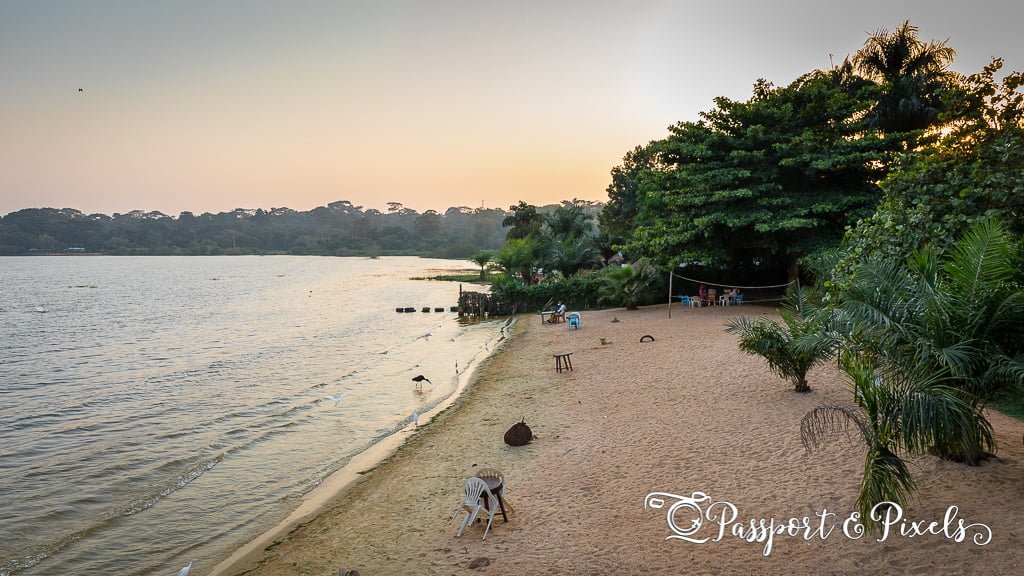 On the shores of Lake Victoria

After a couple of weeks of the Kampala bustle, I was keen to get some fresh air, so we decided to stay a little outside the main part of the town, on the shores of Lake Victoria itself.  A quick internet search (and a dose of luck) led us to Ntambi Road, a palm-lined lakeside promenade lined with bars, restaurants and hotels, that reminded me a little of parts of Australia’s Queensland coast.  It felt a little touristy, but it’s well stocked with places to eat and stay, and the breeze coming off the lake makes it feel cool and relaxing after the heat of the city.

We stayed at the Acacia Beach Hotel, a pretty basic four-storey establishment overlooking the lake.  It was far from luxurious, and seemed to fill up with insects attracted to the lights the second it got dark, but this is Africa, so that sort of thing is to be expected, and the location was perfect: close to all the lakeside bars and restaurants.

What’s more, while still quite expensive for what you got (Entebbe is known for being pricey), it was much more affordable that some of the other places in the area.  So if you’re on a budget I’d recommend it, if only for the location alone.

After a long week and a hot and congested drive down from Kampala, we were naturally keen to head out to begin our Friday evening’s relaxation as soon as possible.  So we dumped our stuff in the hotel and went for a wander along the promenade to see what we could find.

We were soon attracted by the sound of drumming and singing from one beachfront bar, so we decided to go in for a drink to see what was going on.   This turned out to be Goretti’s, a pizzeria and grill that’s one of the most widely-recommended and popular places to eat in Entebbe.  Seems our luck was still holding out.

The music was coming from these guys, a drumming, singing, and dance act from Rwanda.  The bar has free performances most Friday nights, and being able to watch and listen while drinking sundowners on the shores of the lake was the perfect start to a weekend away. 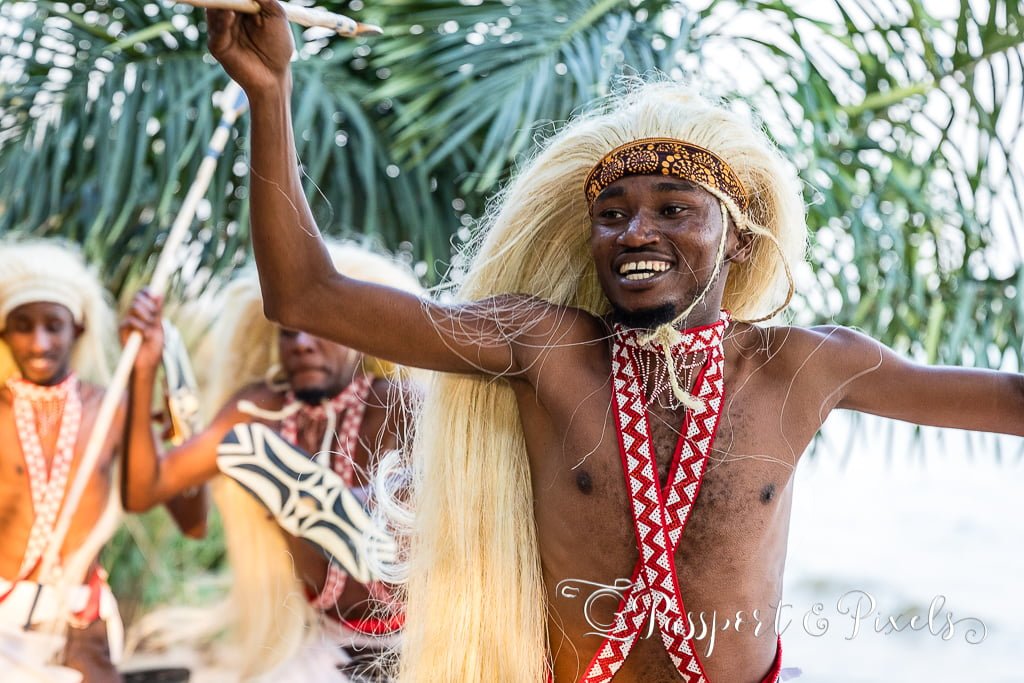 The dancers performed constantly for about three hours, rotating between men and women, changing costumes, but never stopping.  But the real hero was this drummer, who barely took a break the entire evening, and kept on smiling the entire time. 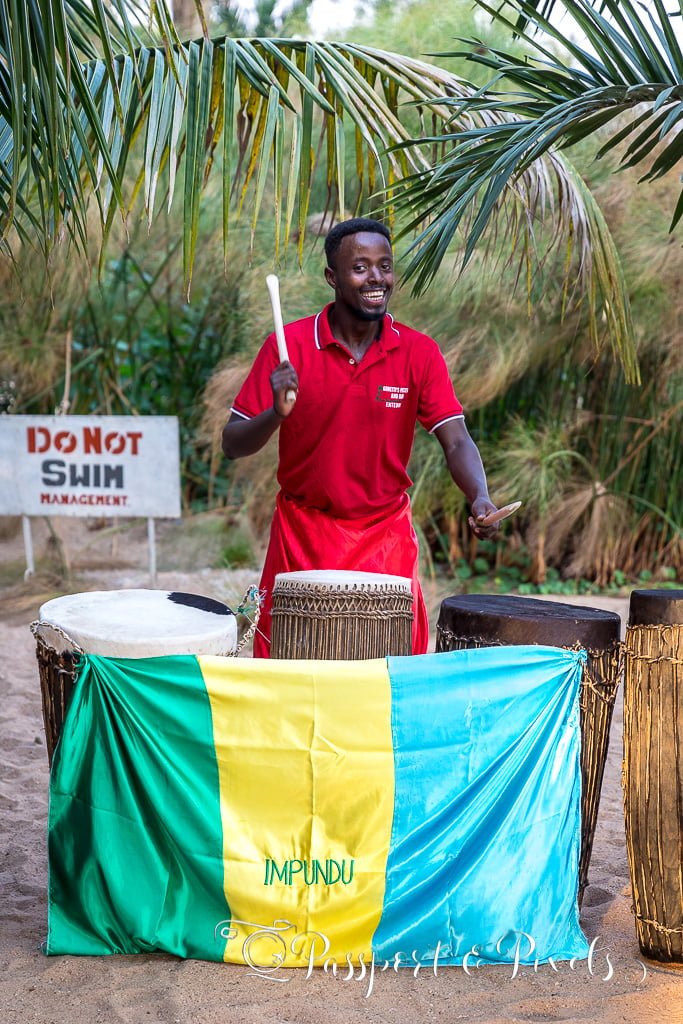 The dances seemed to tell stories: there was one about the men going hunting, another that appeared to be story about a love triangle, and a third in which everyone seemed to get drunk from a communal pot and then fall over.

When it got dark they turned on the fairy lights, and although we were soon bombarded with moths and other night-time insects drawn to the lights, the effect was pretty enchanting.

The next day we set off to meet a photographer friend who had offered to give us a tour of Entebbe’s famous Botanical Gardens. 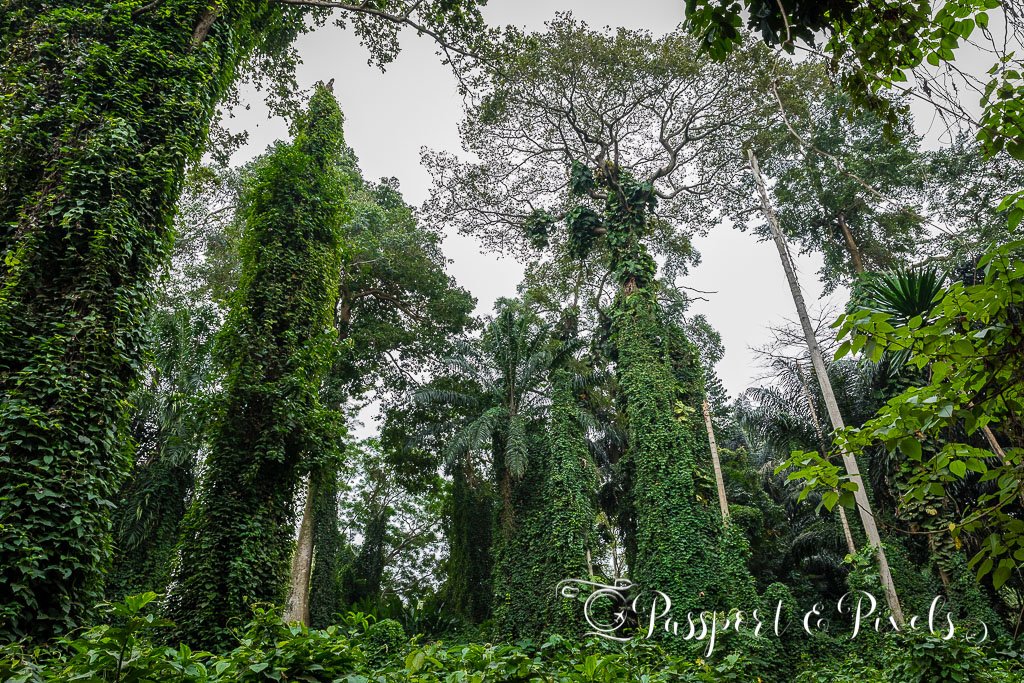 The gardens were designed in 1898, and are laid out in different zones.  My favourite area was the ancient rainforest zone, which is so perfectly wild and jungly that it’s said to have been used in the 1940s as a location for the original Tarzan movies – and you can see why!

Channelling the spirit of Jane in the Tarzan jungle

Sadly I didn’t spot any wild ape-men swinging through the trees, but we did see quite a few primates of a different kind playing in the canopy.

In fact the Botanical Gardens are full of wildlife, though you’ll need to be quick to spot (or photograph) some of it.  There are Marabou Storks…

… cormorants resting in a half-submerged tree…

… a yellow-billed kite on the hunt…

… and a perky little swamp flycatcher, as well as hornbills, nesting hamerkops, and plenty of other birds.

If you like gardens, birdwatching, photography, or just a leisurely stroll, the gardens are definitely worth a visit.  With car and camera it costs about $5 to get in, and you could easily spend several hours there, particularly if, like me, you’ve brought your DSLR and 400 mm lens!

After a quick lunch at the nearby Victoria Mall, we hopped into a taxi for a ride to the Uganda Reptiles Village.

More a rather run-down zoo than a village, the URV is about 3 km outside of town, entirely un-signposted, and rather difficult to find – even, apparently, for a local taxi driver.

But with the help of Google Maps and, after a few wrong turns, we made it there eventually.  Once we’d paid our $5 entry fee, we were introduced to our guide, Simon, who gave us a personal tour (we were the only visitors there).

The centre was set up as a way of promoting respect for reptiles within local communities, and as a place to house venomous snakes when they show up in populated areas.

Simon told us one of his main roles is to act as an emergency response when someone reports finding a snake in their home or workplace.  When the team gets a call, they immediately travel to the location, armed only with one of those litter-picking tools and a bag, to capture the snake alive and bring it back to the reptile village.

The snakes are then housed at the centre in tanks like these and, where possible, many are released back into the wild, well away from people.

Simon told us that he’s been bitten six times in the course of this extremely dangerous work.  Astonishingly, the team doesn’t carry any kind of anti-venom with them as it’s simply too expensive to keep in stock, so if they get bitten, all they can do is drive as fast as possible to the nearest hospital, which may be several hours away. 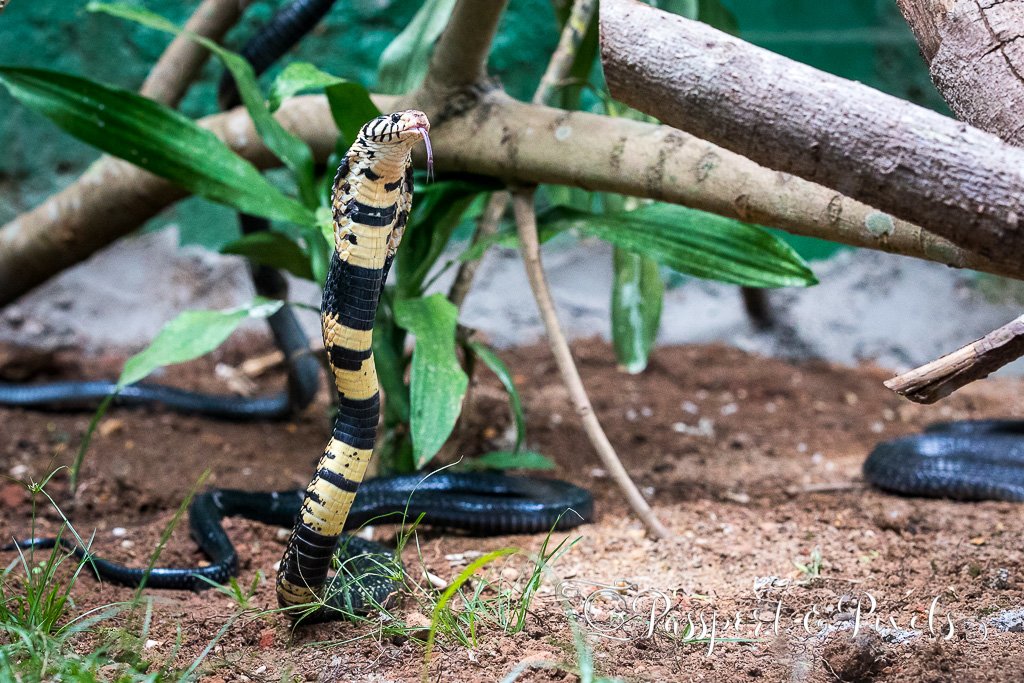 The only protection they carry with them against bites is a type of folk medicine called a black-stone or snake-stone, an animal bone or porous stone which is placed on top of the wound.  I found it rather alarming that these guys should be doing such a dangerous job while relying only on highly doubtful ‘alternative’ medicine to protect them, though there are some reports that the black-stone does have some effect because its use calms the victim down, which helps slow the spread of the venom around the body. 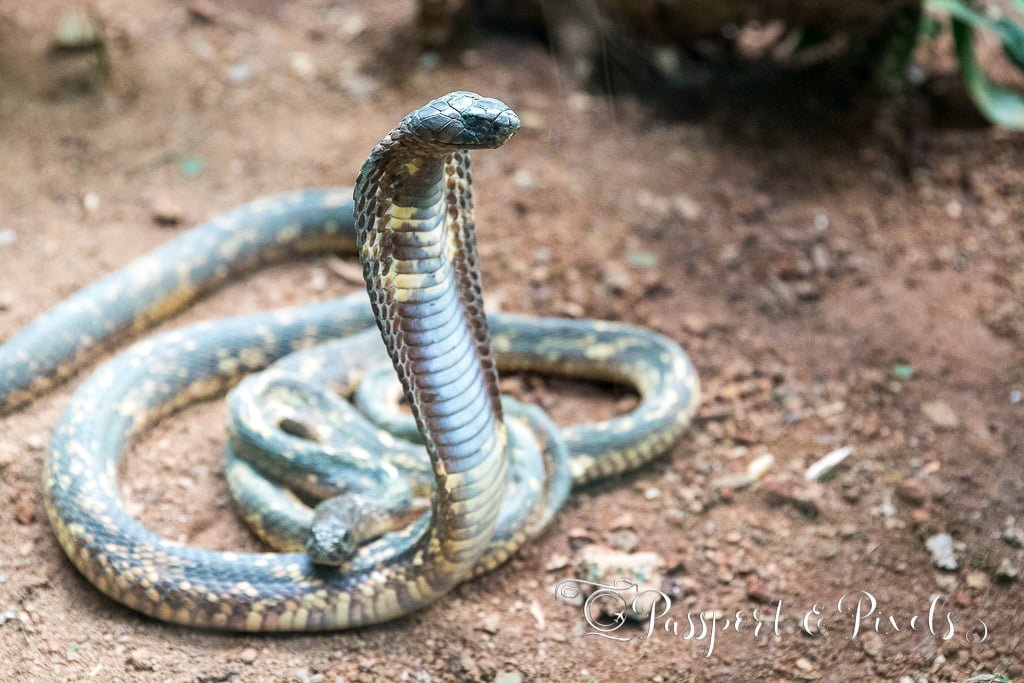 On one occasion Simon was bitten by a Gaboon Viper, which produces the largest quantity of venom of any poisonous snake.  He nearly died – but it hasn’t put him off doing his job.

The village also houses other reptiles, including crocodiles, monitor lizards, tortoises, and an enclosure full of chameleons that you can pick up and stroke – that’s if you can find them amongst all the green!

Making a new friend. I wanted to take him home!

After our busy day, we headed back to the lakefront for a much-needed cold beer.  This time we went to 2 Friends, a beachside bar that also has (expensive) rooms in their building across the road.

The bar has a really lovely location on the lakeshore, and (if you can get a seat), a raised terrace with views overlooking the water and the sun setting behind the trees.

After a hot day you’d be tempted to just jump right in – but there are notices everywhere informing you that swimming is banned.  Apparently there are crocodiles, so it’s probably wise to take their advice.

After a couple of cocktails we then headed over the road to the Thai Garden restaurant, a pretty bungalow set in a tropical garden where we were served some of the best Thai food I’ve had outside of Thailand. The spring rolls in particular were to die for.

The next day, we made our way to the Uganda Wildlife Education Centre, a zoo and sanctuary for animals rescued from poachers and the illegal pet trade. I’ve written an entire post about it here, complete with tons of photos of amazing animals.

But if you want the quick version, here’s a handy short video of what we got up to there.

Have you been to Entebbe?  Do you have any top tips for when I go back?  Or are you thinking of going and have questions or comments?  You can do so just below.

If you’re ready to book, click here to see a selection of hotels in Entebbe.

Thanks for reading!  Do take a look at some of my other Uganda posts here, and check back soon for more.

Jinja and the Nile …

How To Climb Kilimanjaro …